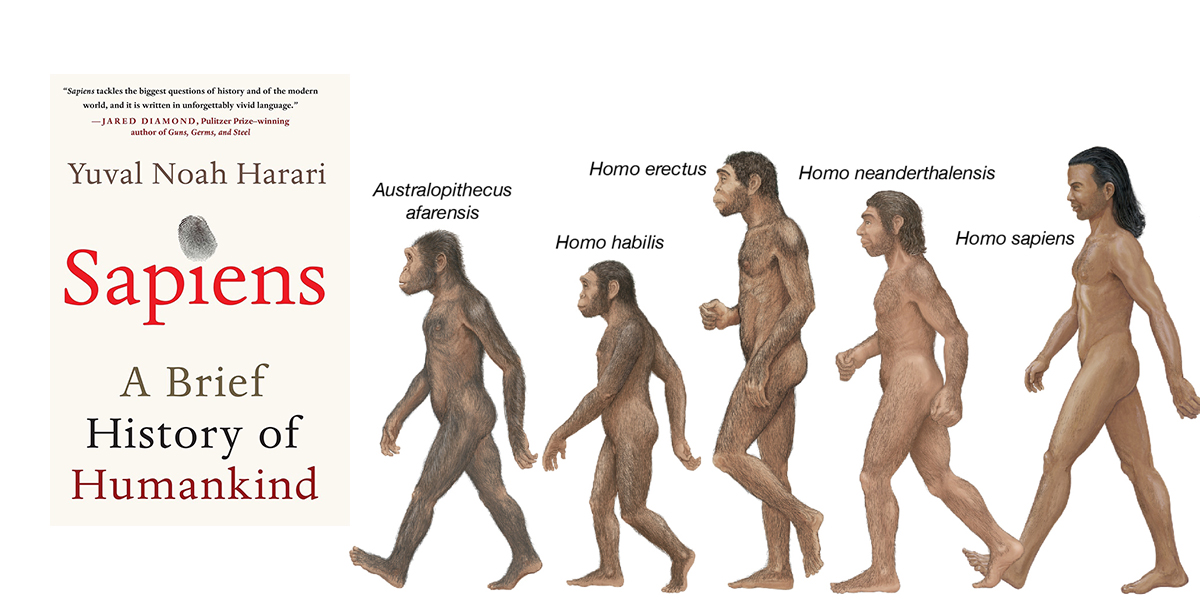 How do you cause people to believe in an imagined order such as Christianity, democracy or capitalism? First, you never admit that the order is imagined.

Essential stats: The book, a popular science account of the evolution of humanity, was originally published in Hebrew in 2011; once it was published in English, in both the US and the UK, it became a major international bestseller, and was published in at least 45 languages. In 2017, after OTP Jamie and Camilla bonded over their love for the book on Love Island (OH YES, MY FRIENDS), the book saw a 23% bump in sales in the UK. That summer, also likely due to the publication of Harari’s next bestseller, Homo Deus, Sapiens hit 1 million copies sold in English worldwide. At the news, Harari said:

As a historian, I’ve always known how exciting history can be, and I am glad I could help many other people experience it. It is wonderful to see how Sapiens has struck a chord with people from so many different countries. Perhaps its success is because we now live in a global world, and all humankind faces a set of collective problems—so people all over the world are interested in our collective story as a species.

Bill Gates listed it as one of the ten books he’d bring to a desert island. “This look at the entire history of the human race sparked lots of great conversations at our family’s dinner table,” he wrote. “Harari also writes about our species today and how artificial intelligence, genetic engineering and other technologies will change us in the future.” As of last summer, Sapiens and Homo Deus had sold a combined 12 million copies globally.

Why was it such a hit—and why was its hit-ness so protracted? In The Guardian, Alex Preston writes: “Sapiens has become a publishing phenomenon and its wild success is symptomatic of a broader trend in our book-buying habits: a surge in the popularity of intelligent, challenging nonfiction, often books that are several years old.

[T]he story of Sapiens is about a book becoming part of a national conversation. “Readers like to read the same book, particularly if it’s a good and interesting one,” [James] Daunt [of Waterstones] says, “because they like to discuss it. But with something like Sapiens, which is a challenging book, and perhaps one you wouldn’t expect to be at the top of the bestseller lists, let alone for years on end, you need to get enough people to read it to ignite that interest.” At a time when politics is more furious and fragmented than ever, when technology is colonizing our everyday existence, when medicine is reshaping our lives, we still look to books to make sense of things, to feel ourselves part of a great communal effort to understand our age. These are serious times and they demand serious, intelligent and challenging books.

So people love it. What about the critics? Many reviewers in Harari’s field were less than impressed. “Nobody can be an expert about everything,” Charles C. Mann sniffed in The Wall Street Journal,

and it’s not exactly surprising that Mr. Harari’s sweeping summations are studded with errors—there are always fleas on the lion, as a teacher of mine once told me. The question is whether there is a lion under the fleas. Sapiens is learned, thought-provoking and crisply written. It has plenty of confidence and swagger. But some of its fleas are awfully big.

Philosopher Galen Strawson more or less agreed in The Guardian. “Much of Sapiens is extremely interesting,” he wrote, “and it is often well expressed. As one reads on, however, the attractive features of the book are overwhelmed by carelessness, exaggeration and sensationalism.” Well, then it’s not surprising it’s so popular.

Harari and Jared Diamond in conversation: