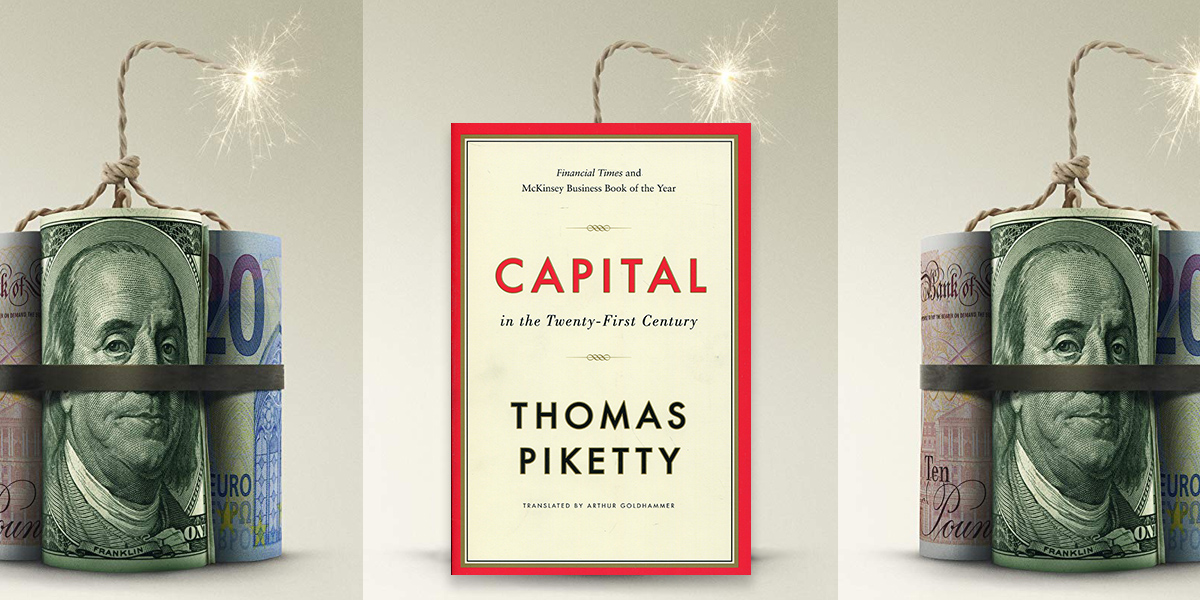 When the rate of return on capital exceeds the rate of growth of output and income, as it did in the nineteenth century and seems quite likely to do again in the twenty-first, capitalism automatically generates arbitrary and unsustainable inequalities that radically undermine the meritocratic values on which democratic societies are based.

Essential stats: French economist Piketty first published Capital in the Twenty-First Century in 2013 in France; the English translation was published a few months later—in fact, its English language publication date was moved up after a prodigious amount of hype (and preorders). Unusual for a book from an academic press, indeed. This 700 page book became a huge (and unlikely) bestseller, shooting to #1 on the Amazon and New York Times lists, selling out everywhere and becoming Harvard University Press’s best selling book ever. Naturally, it has been adapted into a documentary.

What was the basic argument? That the meritocracy is a lie—and that inequality is not an accidental failing but a structural feature of capitalism, and the state needs to step in to rectify it. (Here’s a good explainer if you want more.)

What made it defining? It made an extremely strong case for the above argument—and brought it to the fore of the cultural conversation, at least for those who were paying attention. Branko Milanovic, a former senior economist at the World Bank, called it “one of the watershed books in economic thinking.” Paul Krugman called it “the most important economics book of the year—and maybe of the decade.” Later, he called it a “bona fide phenomenon” and wrote:

Other books on economics have been best sellers, but Mr. Piketty’s contribution is serious, discourse-changing scholarship in a way most best sellers aren’t. And conservatives are terrified. Thus James Pethokoukis of the American Enterprise Institute warns in National Review that Mr. Piketty’s work must be refuted, because otherwise it “will spread among the clerisy and reshape the political economic landscape on which all future policy battles will be waged.”

Well, good luck with that.

Was it just the right book at the right time? Maybe! Economist Stephanie Kelton thought so, writing that the “Piketty phenomenon” was a timely one:

The Occupy movement laid the groundwork for a great debate. What was happening to America? Were we witnessing the rise of a plutocracy or the emergence of a meritocracy? Chris Hayes and Joe Stiglitz made the case on the left, while Tyler Cowen and David Brooks provided a counter-narrative for the right. Both sides had a loyal following, but it was Piketty whose meticulous examination of the evidence, seemed to provide the impartial proof audiences were craving. The left was right. The wealthy owed their fortunes to their forefathers and the Congressman who wrote the loopholes for their tax accountants to exploit. It’s a conclusion that confirmed many priors, which probably explains much of its success.

I mean, who ever heard of a “rock-star economist” before?