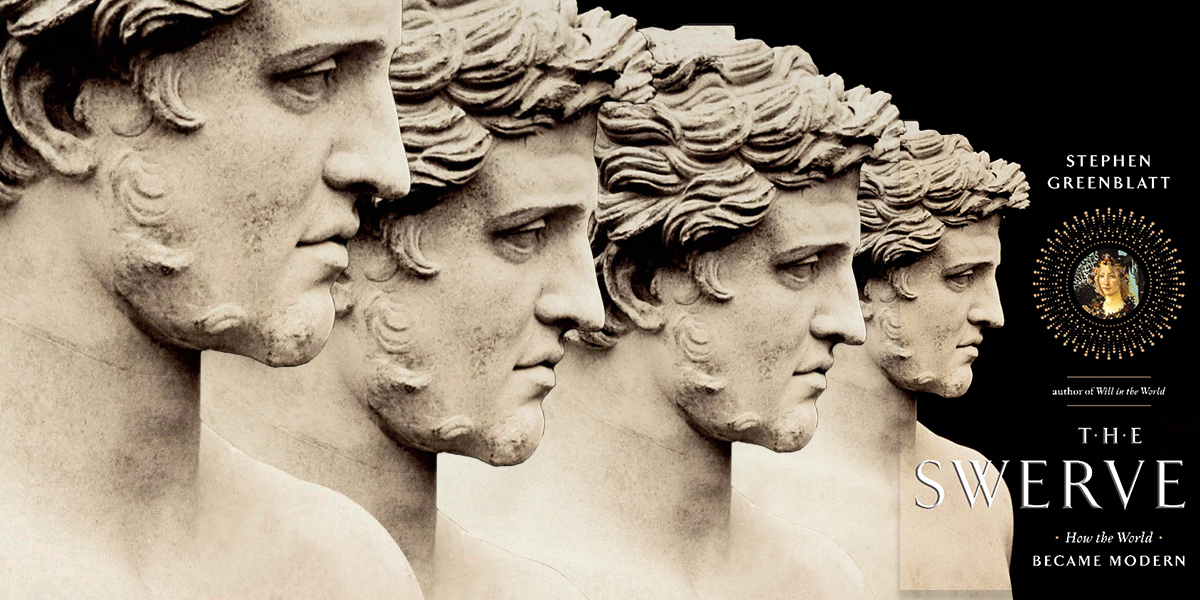 Stephen Greenblatt, The Swerve: How the World Became Modern (2011)

The greatest obstacle to pleasure is not pain; it is delusion.

Essential stats: Historian Stephen Greenblatt’s book about the origin of modernity (in a text by Lucretius) won the 2011 National Book Award for Nonfiction and the 2012 Pulitzer Prize for Nonfiction, and provoked much discussion, especially among literary types charmed by the idea that a single book—a single poem!—could have catalyzed the Renaissance.

I remember when everyone was reading this. But didn’t it get debunked or something? Lots of critics loved it. But some, especially historians, noted a disturbing lack of academic rigor and discordance with contemporary scholarship about the Middle Ages in particular.

In his 2012 essay “Why Stephen Greenblatt is Wrong—and Why It Matters”  in the Los Angeles Review of Books, Jim Hinch was blunt:

Simply put, The Swerve did not deserve the awards it received because it is filled with factual inaccuracies and founded upon a view of history not shared by serious scholars of the periods Greenblatt studies … The Swerve, in fact, is two books, one deserving of an award, the other not. The first book is an engaging literary detective story about an intrepid Florentine bibliophile named Poggio Braccionlini … brimming with vivid evocations of Renaissance papal court machinations and a fascinating exploration of Lucretius’s influence on luminaries ranging from Leonardo Da Vinci, to Galileo, to Thomas Jefferson, is wonderful. The second Swerve is an anti-religious polemic … Greenblatt’s caricatured Middle Ages might have passed muster with Enlightenment-era historians. Present-day scholarship, especially the findings of archeologists and specialists in church and social history, tells a vastly more complicated, interesting and indeterminate story … it is simply untrue to assert that classical culture was ever lost, ignored or suppressed during the Middle Ages … The Swerve claimed for itself, and received, huge moral and cultural authority it simply didn’t earn.

In 2016, Greenblatt won the prestigious international Holberg Prize, “awarded annually to scholars who have made outstanding contributions to research in the humanities, social sciences, law or theology,” prompting Laura Saetveit Miles, a Professor at the University of Bergen, to write that “The Swerve doesn’t promote the humanities to a broader public so much as it deviously precipitates the decline of the humanities, by dumbing down the complexities of history and religion in a way that sets a deeply unfortunate precedent.

If Greenblatt’s story resonates with its many readers, it is surely because it echoes stubborn, made-for-TV representations of medieval “barbarity” that have no business in a nonfiction book, much less one by a Harvard professor.

And as I read, the normal person inside me thought: It is important for academics to write in this accessible style and reach broader audiences with stories about the past! This is the great story of modernity!

When I finished, I put down The Swerve on the table, and the academic side of my brain kicked back in. I had let myself read it as fiction. Yet it was supposed to be not fiction. When I thought of it as a scholarly book, and thought of all those thousands and thousands of people out there who read it and believed every word because the author is an authority and wins prizes, I realized: This book is dangerous.

Dangerous or not, a lot of people read it—and it stands in for the ongoing question of why we read things in this decade, and what pleasurable writing allows us to ignore (or accept).