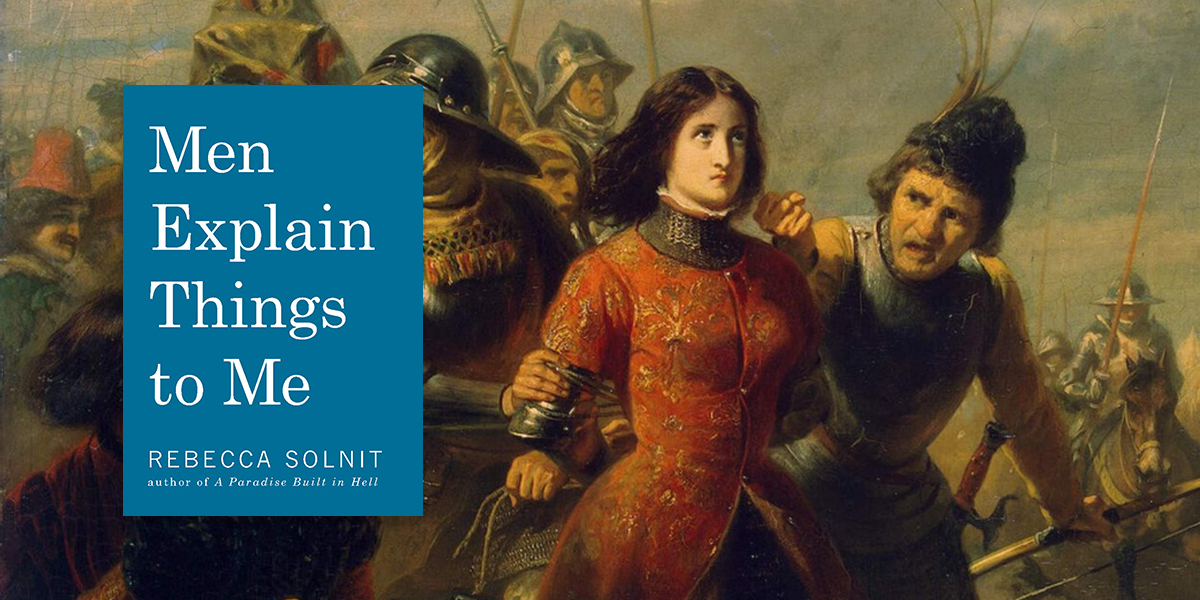 Men explain things to me, still. And no man has ever apologized for explaining, wrongly, things that I know and they don’t.

Gifts to the culture: The term “mansplaining” and every joke we’ve made about it since then. Need we say more?

Not, like, unrelated: Women Listening to Men in Western Art History.

What does Solnit think about the term? At first, she didn’t love it. She told Jessica Valenti for The Guardian in 2014: “A really smart young woman changed my mind about it. I used to be ambivalent, worrying primarily about typecasting men with the term. (I have spent most of my life tiptoeing around the delicate sensibilities of men, though of course the book Men Explain Things to Me is what happens when I set that exhausting, doomed project aside.) Then in March a PhD candidate said to me, ‘No, you need to look at how much we needed this word, how this word let us describe an experience every woman has but we didn’t have language for.'”

Why is the book important? Beyond mansplaining, the essays in the collection give language to the often-invisible dynamics of gender and power that govern our world. And since the 2016 presidential election, that task has felt all the more urgent. Alice Gregory, writing for The New York Times Magazine in 2017, described why Solnit has become a central figure for the resistance against the Trump administration: “In the Trump era, Solnit, who writes against corruption of all kinds—environmental, political, social—seems herself wholly uncorrupted: by these sorts of discussions of commercial popularity; by the harried activity of online life; by the social spheres of Washington, D.C., and New York City; by the aesthetic fetishization that so many women writers are subject to.”

Here’s her conversation with Jia Tolentino:

Extra credit: Solnit writes for Lit Hub a lot. All of it is good.