Ijeoma Oluo on the dangers of white male mediocrity • What to read this month based on your astrology sign • Kim Echlin on writing fiction that bears witness • The historic rise of women street photographers • Claudio Lomnitz on reclaiming family history • A roundtable on making hard choices in a writing career • The kind of antagonist that every story needs • (Almost) every cultural reference in Pretend It’s a City • Isabel Allende on literary ambition • A brief history of statistical manipulation • Carol Edgarian in conversation with Ann Beattie • The story of Pan Am’s first Black stewardesses • Courtney Zoffness on the parental challenge of a child’s anxiety • Hari Ziyad recommends books about Black boyhood • Anne Lamott on her internal creative partner • A reading list of women obsessing over women in fiction • Jennifer Ryan describes weaving WWII history and a family heirloom • Edward Carey talks to Alexander Chee about rewriting a myth • Pia Araneta tracks the ways we talk in the COVID era • What is Northern Gothic literature? • How to write a novel when you can’t visualize scenes • On the modern boom of Latin music • Six books with the best kid narrators • Your March climate change readings • How Vanessa Bell and Duncan Grant designed their domestic space • Ai Weiwei in conversation • Dealing with chronic pain as a writer • Kate Hope Day on how to keep a novel alive • An interview with Melville House • Ida B. Wells’ mission to bring to light the truth of lynching • Kliph Nesteroff recommends five books for understanding Native American comedy • Olivia Campbell on the long history of silencing woman in science

“Ishiguro brings into sharp focus those left behind in the wake of societal change”: Lori Feathers on the novels of Kazuo Ishiguro • Dhalgren, The Twits, Twenty Thousand Leagues Under the Sea, and more rapid-fire book recs from poet and translator Ted Dodson • On his birthday, the first reviews of every Gabriel García Márquez novel • Bless Me, Ultima, The Jungle, Thy Neighbor’s Wife, and more rapid-fire book recs from Noé Álvarez • Kazuo Ishiguro’s Klara and the Sun, Viet Thanh Nguyen’s The Committed, and Stephen King’s Later all feature among the Best Reviewed Books of the Week

10 new crime novels, mysteries, and thrillers to check out this March • “Crime and the City” visits Trinidad and Tobago, a small island nation with a powerful literary history • Alexandra Andrews on the great, mixed-up literary tradition of imposters and doppelgangers • Loren D. Estleman on the art of using real historical figures to craft thrilling narratives for readers • Nicole Glover rethinks the role of police in mysteries • Luke Poling on the roots of Boston noir • Sara Paretsky on Dorothy B. Hughes and the meaning of noir • Heather Martin on the mostly unknown history of Lee Child’s letters to the editor of the New York Times • Deanna Raybourn on six historical scandals and the novels that bring them alive • Hard science fiction is still overwhelmingly white, but things are finally starting to improve, says S.B. Divya 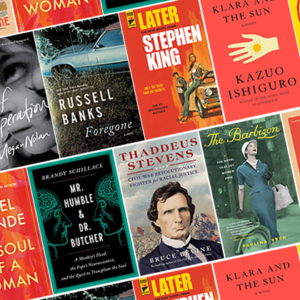