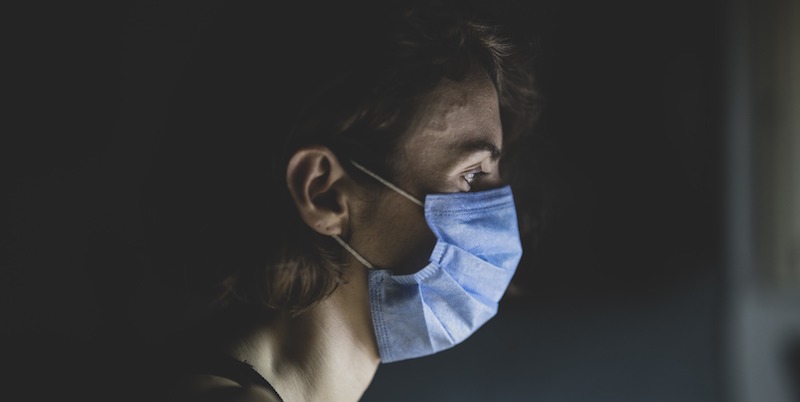 Tracking the Changing Ways We Talk in the COVID-19 Era

In Ann Arbor, Michigan, a man and his wife take their daily walk around the neighborhood, pointing out things that weren’t there yesterday. They spot newly bloomed flowers, Black Lives Matter signage, and an oversized Costco stuffed bear in front of one of the houses. They’ve seen the bear dressed up in different costumes and in at least half a dozen positions on a chair outside.

In Grand Mere State Park, Michigan, a woman grabs a spot on the beach, a place she’s frequented growing up. In the last two years, the beachfront has eroded, destroying the shoreline and bringing the boats in closer and closer. Usually, she wouldn’t be able to get a spot on the weekends because of overcrowding tourists, but today, there are few people, and the waves are calm around her.

In a row of cars, a woman honks her horn down the street her cousin lives on. Today, her cousin finished her last chemotherapy treatment and marked the occasion by ringing a ceremonial bell, a rite of passage for cancer patients at the hospital. Since the facility couldn’t allow in friends and family because of COVID-19 regulations, about 25 of them gathered for a parade on the street. The woman feels gratitude as her cousin watches the decorated cars drive past her.

These are a few of the diary entries Betsy Sneller, a sociolinguistics assistant professor at Michigan State University (MSU), has collected since mid-April. Along with co-director Suzanne Wagner, the two, along with their team of researchers, began gathering voice notes from Michigan residents to track language changes during the pandemic. The project, titled MI Diaries, aims to track how social distancing and virtual learning environments impact language in both the short and long term. “But there’s also just this human side of things,” Sneller said. “You see week to week people’s feelings and the things they want to talk about really shift.”

As numerous countries face repeated waves of lockdowns, attempting to flatten the curve, linguistics experts from around the world are studying the language of a pandemic. In March 2020, terms like social distancing, quarantining, and isolation entered our day-to-day language. Though these words aren’t new, they’ve taken on new meanings and nuances that affect our perceptions of the world around us. The past year has been one of “doom scrolling,” while sipping on “quarantinis” is part of our “new normal.” On MSU’s research page, Wagner, a linguistics associate professor, identifies World War ll as a big inflection point for changes in the English language since it brought people together who wouldn’t have typically had contact with one another. “Soldiers were sent to different bases and women entered the workforce,” Wagner said. “In contrast, COVID has forced us to physically separate—normalizing virtual learning and interactions.”

“We had people referring to it as the ‘before times’ and the ‘now times’ or ‘lockdowns’ vs. ‘quarantining.’”

Sneller was offered her job at MSU in mid-March 2020, around the same time the World Health Organization (WHO) declared a global health emergency. Determined to document a historical moment, she and Wagner succeeded in having their study approved by Michigan’s Institutional Review Board in record time—four days. Every week, she meets her team on Zoom and they come up with question prompts for their participants. Some examples include: “What was it like the first time you wore a mask outside?” or “Have you or anyone close to you had to cancel any big plans?” And though most questions are related to our current situation, others are posed to get a sense of the participants (What are you grateful for?). Diary entries are recorded on participants’ phones and uploaded to the MI Diaries app.

The voice notes are intimate, as diaries naturally are. One person describes having to celebrate Pride week online rather than at their friend’s drag show, as in previous years. Some people express anxiety in advance of the U.S. election. For others, you can hear heavy-hearted sighs as they speak about racial injustice and protests. The diary entries, as a whole, accomplish a purpose beyond language documentation, tracking historical social changes that have coincided with the pandemic. Sneller noticed a shift in participants’ tones around the three-month mark as they received more diary entries from people feeling “kind of low, hopelessness almost.”

Though the research is still in its early days, Sneller has some predictions about how social distancing will impact speech; in particular, the term “pandemic.” In the beginning of April 2020, participants and people worldwide were unsure what to call the coronavirus. “We had people referring to it as the ‘before times’ and the ‘now times’ or ‘lockdowns’ vs. ‘quarantining,’” she said, adding that now people are converging on using the term “pandemic.”

Last November, Oxford English Dictionary (OED) released their Words of an Unprecedented Year report. Unlike previous years, where only one word or phrase is selected as the word of the year, such as “climate emergency” for 2019, editors felt that 2020 couldn’t be summed up in one term. The report included dozens of words such as “mask-shaming,” “systemic racism,” and of course, “coronavirus.” In the OED’s corpus analysis, prior to January, the word “coronavirus” only appeared 0.03 times per million tokens—a linguistic term referring to the smallest units of language collected in track. In April, the figure for the word “coronavirus” (including its variant, “COVID”) was 1,750 times per million tokens, making it one of the most frequently used nouns in the English language. When comparing keywords—terms that appear significantly more in the OED corpus—the top 20 words in January included “bushfires,” “impeachment,” and “airstrike.” In March, all 20 words were COVID-related. Editors at OED continue to track pandemic-related changes, even releasing two special updates outside their quarterly report. One claim states that the only new word truly produced from the pandemic is the acronym COVID-19.

Elfrieda Lepp-Kaethler, a psycholinguistics and TESOL professor based in Manitoba, attributes the unprecedented language change to the speed at which the virus spread, forcing us into online environments. During lockdown, Lepp-Kaethler began researching memes, something she refers to as a “fertile ground” for language change. “[Memes] thrive off of shared understandings… so a meme is tapping into that kind of in-group,” Lepp-Kaethler said. COVID provides a backdrop where everyone can be an insider, she added. “So you know, we’re all in this together.” She also says the pandemic has demonstrated how people use humor to cope in difficult situations.

Lepp-Kaethler completed a diploma in 2019 for expressive art therapy, which uses different art forms such as painting or journaling to help facilitate growth and healing. She considers memes to be a form of expressive art and tries to integrate her research in the classes she teaches. In March, Lepp-Kaethler, along with many other professors, had to switch to an online model that many now refer to as “Zoom school.” In general, this model has thrown up numerous communication barriers that ultimately disadvantage marginalized communities, especially when paired with an infodemic (an excessive amount of information about a problem, such as a virus, that may be unreliable and spreads rapidly). A US study published in August by the TESOL journal reported that virtual learning disproportionately disadvantaged multilingual students. While there was a flood of information provided in English, there were fewer accommodations available for English learners in U.S. school systems, having far less technology infrastructure to manage the transition to online learning.

Meanwhile, Translators Without Borders (TWB), who is working to translate public health material, stated in a policy brief that communities who don’t speak the dominant language may not be able to make informed decisions about how to behave during the pandemic. TWB’s head of crisis response, Ellie Kemp, told Devex, a media platform for the global development community, that jargon-y terms like “social distancing” can be unhelpful since the term is already unfamiliar. She suggests the phrase “keeping your distance from other people,” as an alternative to help convey instructions. Additionally, advocates in Canada have urged public health authorities to make vaccine information accessible to non-English speakers, since misinformation on the safety of the vaccine is pervasive. In the US, the Centers for Disease Control and Prevention’s vaccine monitoring program—designed to track side effects of the COVID-19 vaccine—is currently only available in English.

In Betsy Sneller’s Boston apartment, she is surrounded by boxes as she gets ready to move for her MSU job with her partner and her cat. She sees an email from someone asking for the address of a couple who was featured on the MI Diaries project website. The couple was recently married, and the person who wrote the email wants to send them a congratulations card. Though Sneller can’t disclose that information, it brings a smile to her face. “I experience a range of emotions, mostly ranging from like gratitude that people are sharing these things with us but also, it helps me feel less alone,” she said.

The therapeutic effects of sharing stories go beyond Sneller; she noted that diarists sometimes send in voice notes that aren’t in response to the prompts. “We find that language is deeply tied to personal identity and often shows both individual history and kind of group history,” she said. “Language matters, period.”

The use of war metaphors throughout the pandemic has captured the attention of linguistics experts.

Case in point is former US President Donald Trump’s repetition of the term “Chinese virus” throughout the pandemic. The language he chose to address COVID led to anti-Asian sentiment across the nation, with people from the community reporting verbal and physical attacks because of coronavirus fears. In response to the rhetoric, WHO tweeted that words “can perpetuate negative stereotypes or assumptions, strengthen false associations between COVID and other factors, create widespread fear, or dehumanize those who have the disease.” Trump’s repeated use of the term was intentional; one photojournalist from the Washington Post captured a photo of Trump’s notes during a briefing in March that featured a thick, black line crossing out the word “corona.” Scrawled above, was the word “Chinese.”

The use of war metaphors throughout the pandemic has captured the attention of linguistics experts, many of whom encouraged the use of non-war-related metaphors to boost morale and encourage people to follow safety precautions. Metaphors such as the “fight against coronavirus” could cause unnecessary anxieties, which is why linguists from around the world began discussing alternative phrases on Twitter under the hashtag #ReframeCOVID. Lepp-Kaethler said the discussion recalls the “hero” metaphors used to describe frontline workers. Those metaphors “can obscure the real-life situations that force people into these frontline jobs,” Lepp-Kaethler said, adding that calling them “heroes” takes the focus away from the very human challenges that these workers face.

Sneller noted that, like many other things, the length of the study is up in the air. “One of the questions that we have about this language change question is ‘How long of a time course will any impact be?’,” she said, adding that they will have to document participants well after a vaccine is available and people are no longer social distancing. “I don’t know when that’s going to be.”

Pia Araneta is a Toronto-based writer. Her work covers social justice issues, lifestyle, pop culture and news. She has written for Global News, The Eyeopener and The Gateway. 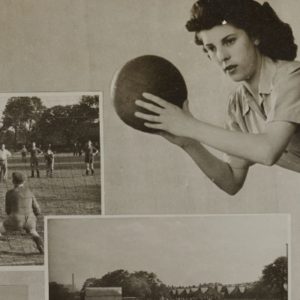