TODAY: In 1783, Washington Irving, best known for his short stories “Rip Van Winkle” and “The Legend of Sleepy Hollow,” is born.

On Walt Whitman’s time working in the thick of the Civil War • Tiya Miles on the fearless truthtelling of Harriet Ann Jacobs • Edward Hirsch gives a close reading of Robert Hayden’s poem, “The Whipping” • Timothy Brennan pays tribute to Edward Said • Emily Raboteau and Emily Schiffer capture mothering small children in a pandemic • Georgette Moger finds solace as a young widow in Paris • Dawnie Walton searches for herself in rock and roll • An economist explains the winner-take-all-approach to book publishing • Melissa Febos on the linguistic trajectory of the world “slut” • Ilona Bannister asks, where’s the “room of one’s own” for moms? • Andri Snær Magnason navigates a sacred Icelandic text • How the West Village transformed Eleanor Roosevelt • Marcos Gonsalez on what it means to choose whiteness • On the task of uncovering Rwanda’s modern history • A few savage burns from (and about) literary icons • What can dogs teach us about alien intelligence? • The prophetic visions and unflinching will of Harriet Tubman • Writing a novel in 30 days, in prison, during a pandemic • In praise of the detective novel • Seven memoirs that ignore the limits of linearity • Why Orville Schell made The Big Switch from nonfiction to fiction… in his eighties • Marcia Butler recommends six books that taught her unexpected craft lessons • Nancy Johnson on the writing techniques she learned as a TV reporter • On the unsung Larry Doby and what baseball owes Jackie Robinson • Inside the long friendship of James Merrill and Elizabeth Bishop • Jackie Polzin on the joys of slow correspondence • On Merry Levov, American literary fiction’s peerless female stutterer • Brandy Schillace on the first successful organ transplant

The Bell Jar, The Argonauts, Their Eyes Were Watching God, and more rapid-fire book recs from Gabriela Garcia • A month of literary listening: AudioFile’s best audiobooks of March • New titles from Jeff VanderMeer, Martha Wells, Helen Oyeyemi, and more of April’s best Sci-Fi and Fantasy books • Olivia Laing on Rachel Kushner’s The Hard Crowd, Sophie Gilbert on Melissa Febos’ Girlhood, and more of the Reviews You Need to Read This Week • Kaitlyn Greenidge’s Libertie, Sharon Stone’s The Beauty of Living Twice, and Melissa Febos’ Girlhood all feature among the Best Reviewed Books of the Week

Crime and the City heads to booming Bangalore, full of dreamers and schemers • Paula Munier asks, why do so many novels feature golden retrievers? • Which international crime thriller should you binge this weekend? • Erica Robuk on five fearless female spies and resistors who fought the Nazis • Shelley Nolden with eight novels featuring twisted medicine • What’s the difference between a mystery and a thriller? Allison Brenner says it’s all about the pacing • April’s best new crime and mystery novels, as selected by the CrimeReads editors • Shelly Ellis on the real-life cases of bigamy that inspired her thriller • Laura Griffin asks, what draws writers to Texas as a setting? • Will Staples on the lawless zones that provide safe harbor for animal traffickers

The Blizzard Party by Jack Livings, Read by Rebecca Lowman 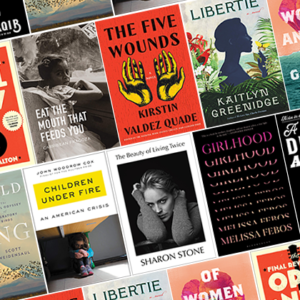