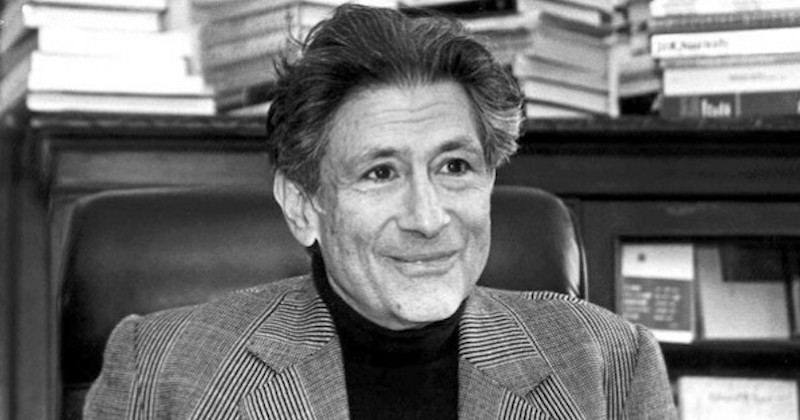 Timothy Brennan: “He was never much drawn to academic fashions.”

Long after his death in 2003, Edward W. Said remains a partner in many imaginary conversations. For those who knew him, the exchanges when he was alive are missed almost as much as his person—the dark darting eyes, compassionate but fiery, of a man capacious and alert, a little daunting, and often very funny.

I found myself at the University of Madras, South India, in December of the year he died. Leukemia had had its way with him only a few months earlier, and now that he was gone, the memorials began to mount. Invited to speak about his work so far from his New York home, I expected to find myself in a small seminar room but was led instead to the chancellor’s office for tea, a US consular official beside him, both surprisingly well-informed about his writing, then to a lecture hall the size of a high school gym. The rows were vivid with the color of school uniforms, and the room alive with an excited bustle.

With all the seats taken, many stood along the walls and at the windows—students, community members, and some international visitors. They seemed to want to hold on to anything that had a brush with the man himself. The Egyptian novelist Ahdaf Soueif recalled that young people used to walk up to Said after lectures just wanting to touch him. Moments before I took the lectern, two rows of students at the back abruptly stood up (their intervention had apparently been planned) and began to chant lines from Frantz Fanon’s Wretched of the Earth as if at a political rally.

The tumultuousness of the event seemed at odds somehow with the more mixed reception Said had received over the years, and its third-world revolt a little distant from his own shifting positions and divided sympathies. In the previous decade, in fact, Said had threatened to disappear “into the front pages” (as Martin Amis once wrote about the novelist Salman Rushdie), having become an icon rather than the down-to-earth and rather insecure seeker he had always felt himself to be.

On the other hand, the energy of the event seemed just right for a man who had managed to turn street fighting into cultivated debates in foreign lecture halls. With Said, Palestinians had their urbane spokesman probing the manias of the metropolis; supporters of Israel found their malignant charlatan and terrorist; scholars of the Orient saw a well-armed foe in the rearview mirror; a non-white diaspora in the universities thanked him for blazing the trail of their own multicultural emergence; leftists within the university scratched their heads wondering how someone with his views managed to be so rewarded by the powerful. It had, in other words, become easy to turn Said into a series of placards without depth or nuance.

His overall effect, though, was hard to miss. A Palestinian American critic, intellectual, and activist, Edward Said is now considered one of the most transformative thinkers of the last half-century. Poet and theorist, cajoler and strategist, he was equally at home in scholarly journals, popular magazines, and mass-circulation newspapers. His books and essays are still read in more than 30 languages and admired throughout the world.

Said straddled an astonishing number of spheres of influence. He was an orchestra impresario in Weimar, a raconteur on national television, a native informant in Cairene newspapers, a negotiator for Palestinian rights at the State Department, and even on occasion an actor in films in which he played himself. His career was like a novel, right down to the fatal blood disease over the last decade of his life backlit by his own writing on personal and civilizational decline.

Born in 1935 in Jerusalem, the son of a businessman, he, along with his family, was dispossessed of home and homeland by the British mandate of 1948 and the military actions that followed. A brilliant if erratic student, and a gifted pianist from an early age, he grew up largely in Cairo, arriving in the United States in 1951. Later, he attended Princeton as an undergraduate and went on to Harvard for his doctoral studies before joining the faculty of English at Columbia University in 1963, where he remained for most of his professional life. By 1975, his career was already on its way to legend. Endowed lectures and honorary degrees poured in as he launched new fields of inquiry that changed the face of university life.

His politics belonged to more than books. Writing might have been their leading edge, but Said was also an original tactician, advocating political positions that were at first unpopular but later taken up by movements on the ground. He made unexpected alliances, carved out new institutional spaces, badgered diplomats, and counseled members of Congress—a harsh critic of the US news establishment and, at the same time, a major media personality himself. As he confounded think-tank pundits again and again on the nightly news during the inhospitable Reagan and Bush years, he made the university seem to many a more exciting place and professors part of a vital conversation. More than anyone, he moved the humanities from the university to the center of the political map.

It was not just that along with Noam Chomsky and a few others he tore the “confidential” stamp off the official cover story, but he did it with a personality marked by impatience and vulnerability, by turns angry and romantic, that made the dense and difficult at the same time entertaining. By getting to the main stage with positions that only years before had been beyond the pale, he opened doors to others: “the mighty warrior, the Salah al-Din of our reasoning with mad adversaries, source of our sanity in despair,” as the Iranian scholar Hamid Dabashi put it.

He made the university seem to many a more exciting place and professors part of a vital conversation.

When he took his first university job, the defenders of Israel could ignore the Palestinian cause completely; a decade later, he had invented a new vocabulary and a new list of heroes. Almost single-handedly, he had made the Zionist stance no longer sacrosanct, and criticizing it had become respectable, even popular in some circles.

Although he put his imprint on them, the routines of university life did not always suit Said. A throwback to an earlier kind of intellectual—widely read on everything and interested in what he did not know—he was never much drawn to academic fashions like cyberpunk, affect theory, or posthumanism. He was much more the dragoman, cultivating the old-fashioned, the universal, and the “good,” which he expressed in just those terms.

For all his writing on exile, he was a rooted man—imaginatively in Palestine and actually in New York, doting as always on its “restless, turbulent… energetic, unsettling, resistant, and absorptive” rhythms. He lived there the longest and despite many opportunities to do so never left. Place and place of mind were to that degree at odds in him. If along with Chomsky, Hannah Arendt, and Susan Sontag he was the best-known US public intellectual of the postwar period, he was the only one of them who taught literature for a living.

Said reveled in this fact. In his own mind literature was not just an avocation but the bedrock of his politics and the secret of his public appeal. Drawing on unusual sources ranging from musical scores to medieval Arabic transcriptions and finding inspiration in the likes of British media analysts and Pakistani socialist poets, he brought the humanities to the center of public life, deliberately reanimating the “great books” with the passions of war and anti-colonial revolution. As he saw the matter, this was his main contribution, much more than anything he managed to accomplish for the Palestinian cause. No one in the 20th century, at any rate, made a better case that struggles over the meaning of secular texts, not just holy books, affect the destinies of rights and land.

Those who knew Said only through his books did not see all of him. They missed his boyishness, certainly, as well as his fierce loyalties to friends, who in turn excused a fair amount of bad behavior—the vanity, the occasional petulance, the need for constant love and affirmation.

Even admirers like the historian Tony Judt, for example, considered him an essentially angry man, although that looked completely past the gentleness many of us saw as he chatted with cabdrivers or sat rapt watching the hard-boiled, working-class cops of Law & Order. A childhood friend while visiting his apartment late in life remarked that if only his enemies could see the solicitousness and grace with which he served his wife tea, he could never be dismissed as a polemical or dogmatic man. 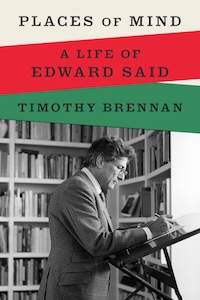 Excerpted from Places of Mind: A Life of Edward Said. Used with the permission of the publisher, Farrar, Straus and Giroux. Copyright © 2021 by Timothy Brennan.

Timothy Brennan is the author of several books, including At Home in the World: Cosmopolitanism Now; Borrowed Light: Vico, Hegel, and the Colonies; and Salman Rushdie and the Third World: Myths of the Nation. His writing has appeared in The Nation, The Times Literary Supplement, and other outlets. He teaches in the humanities at the University of Minnesota and has received fellowships from the Fulbright Foundation and the National Endowment for the Humanities.

A Tale of Three Diaries: On Destroyed Landscapes and Lost Narratives 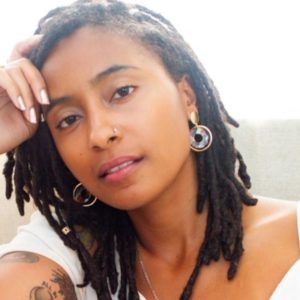