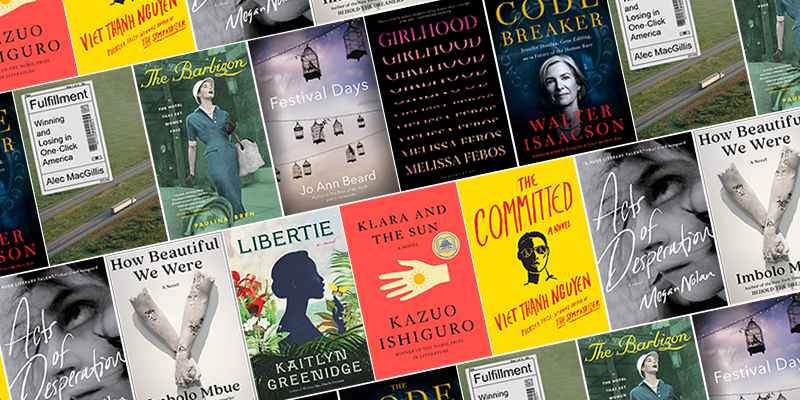 1. Klara and the Sun by Kazuo Ishiguro
(Knopf)

“Klara and the Sun confirms one’s suspicion that the contemporary novel’s truest inheritor of Nabokovian estrangement—not to mention its best and deepest Martian—is Ishiguro … Never Let Me Go wrung a profound parable out of such questions: the embodied suggestion of that novel is that a free, long, human life is, in the end, just an unfree, short, cloned life. Klara and the Sun continues this meditation, powerfully and affectingly. Ishiguro uses his inhuman, all too human narrators to gaze upon the theological heft of our lives, and to call its bluff … Ishiguro keeps his eye on the human connection. Only Ishiguro, I think, would insist on grounding this speculative narrative so deeply in the ordinary … Whether our postcards are read by anyone has become the searching doubt of Ishiguro’s recent novels, in which this master, so utterly unlike his peers, goes about creating his ordinary, strange, godless allegories.”

“With smoke-and-mirrors panache, The Committed continues the travails of our Eurasian Ulysses … From a satirical James Bond-esque spy story in The Sympathizer, the author shifts to James Baldwin’s intersectional politics in The Committed to address greed, prejudice, and violence … The Committed‘s revolutionary core is its plasticity—a novel of ideas that continuously shapeshifts to question its raison d’être … Nguyen’s decision not to put diacritical marks on his Vietnamese characters’ names enhances the novel’s paradoxes and allows it to gain multivalent, poetic meanings across languages.”

3. Acts of Desperation by Megan Nolan

“Please believe the hype. Please do not roll your eyes and say ‘not another Sally Rooney’. Nolan is not another Sally Rooney. She is another seriously exciting writer who happens to be young and female and Irish. Those are broad categories. Nolan’s book describes a very particular experience and it does so with rare intelligence and courage … The star feature of Nolan’s narration is her ability to cut through received ideas about women, relationships and even rape. We get the angry, vain, selfish woman as well as the supplicant, the self-harmer, the victim. We get a real person. Ciaran is sketched in less detail, but is still, impressively, seen in the round, never merely as the villain of the piece … Nearly 300 pages is a long time to sustain a first-person voice without risking airlessness. Towards the end I wished for a little more showing and a little less telling. The novel’s key dramatic event is arguably too crude a climax. These are tiny niggles. Mostly I was transfixed with admiration and visceral horror. I knew a Ciaran once, and this novel is an extraordinary likeness—not of the man, but of the mechanism, the way you get from hopeful ‘hello’ to acts of degrading desperation. Nolan’s headlong, fearless prose feels like salt wind on cracked lips. You wince and you thrill.” 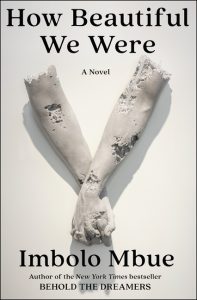 4. How Beautiful We Were by Imbolo Mbue
(Random House)

“The novel’s reach could have easily exceeded its grasp, given the weighty themes and its span, but Mbue reaches for the moon and, by the novel’s end, has it firmly held in her hands … The novel is kaleidoscopic in design, but one girl, Thula, becomes perhaps the closest thing to a protagonist … But Mbue, gloriously, avoids the trap of depicting the Story of Africa as pure and unmitigated exploitation and slow-moving calamity. Some of the novel’s most thrilling sections are those that follow Thula as she fights to depose the dictator whose complicity has eviscerated her home … Though Mbue’s novel serves as elegy to a land lost, it is also a celebration of something less tangible gained, whatever it is that’s captured in the voice of a first-generation diasporic Kosawan asking their Big Papa or their Yaya to please tell them a story of the old country.”

“Greenidge is a master of character building … Libertie is set in the midst of the Civil War, but the place and time these characters are in doesn’t make them unfamiliar … Libertie is an easy page turner—its simple prose makes the plot digestible and the lyrical sentences sing louder … Because the book is written in the first person, readers are allowed to get intimate with Libertie’s thoughts. She keeps so much of the way she thinks hidden from other characters (for a myriad of reasons), that it’s an intimate joy to get a glimpse into her logical, sympathetic mind … a beautiful telling of gorgeously tragic characters who keep you rooting for them, even as they continue to stray and stray and stray.”

2. The Code Breaker: Jennifer Doudna, Gene Editing, and the Future of the Human Race by Walter Isaacson
(Simon & Schuster)

“Coming in at nearly 500 pages, the book dives into the essence of life and the heady world of genomes and genetic coding, or what Isaacson calls ‘the third great revolution of modern times,’ following the atom, and the bit which led to the digital revolution. For the uninitiated—those folks who cannot tell their DNAs from RNAs—understanding this new frontier in science can be a bit daunting … Isaacson leans heavily on profiles to tell the broader story. In this case, he focuses on Doudna (pronounced DOWD-nuh) to explore the confluence of science, innovation, and ethics … Isaacson passionately charts Doudna’s swiftly rising star … But Isaacson also pays tribute to the many others who, in their own way, contributed to the understanding and development of gene editing, by weaving in compelling vignettes along with glossy photos of scientists and researchers. It’s a broad cast of characters, and at times the choice seems a bit random. But, ultimately, it helps create an understanding that these breakthroughs are not created in a bubble, it requires a patchwork of experiments and expertise over many years.”

3. The Barbizon: The Hotel That Set Women Free by Paulina Bren
(Simon & Schuster)

“Among the handful of iconic hotels closely entwined with New York’s cultural history, the Barbizon is perhaps less widely known than the Plaza, Algonquin or Waldorf Astoria. But as Paulina Bren’s beguiling new book makes clear, its place in the city’s storied past is no less deserving … Ms. Bren’s juicy sociocultural history glitters with the names and stories of talented, beautiful young women who passed through the Barbizon’s Italianate atrium lobby on their way to literary and cinematic stardom … Two institutions helped shape the Barbizon’s legacy: the Katharine Gibbs Secretarial School…and Mademoiselle magazine … Ms. Bren convincingly argues that the histories of both shed light on the history of women in 20th-century America … In considering the repercussions of Prohibition, the Depression and McCarthyism on American women, Ms. Bren occasionally wanders too far into tangential material. But one of the book’s more intriguing side stories concerns the hotel’s long-haulers, dubbed ‘The Women’ … And in this captivating portrait, the hotel comes alive again as an enchanted site of a bygone era, ‘a place of glamour, desire, and young female ambition.’”

“…a wide-ranging, impressionistic tour of a nation whose citizens’ existence has become intertwined with a single corporation … As MacGillis notes, understanding how a single corporation became so widely and deeply entrenched requires historical perspective … What MacGillis feels is underappreciated is the geographical remapping of wealth—and, with it, power—that the transformation has brought about … MacGillis describes how, while rich corporations and their top employees have settled in a small number of wealthy coastal cities, the rest of the American landscape has been leached of opportunities … These numbers document a stark divergence, but they don’t capture its human dimensions. That is MacGillis’s goal, as he explores what the erosion of power and possibility means for regular people … Addressing the regional imbalances in America would be an enormous undertaking, and MacGillis doesn’t presume to offer prescriptions. But his book suggests one very big place to start: Serious workplace reforms would affect hundreds of thousands of workers, as well as help reshape the broader labor landscape.”

“In a world increasingly lived online, there is a grounding comfort to Jo Ann Beard’s refreshingly analog voice. This isn’t to say her writing isn’t relevant or that her language doesn’t wow. Beard’s power comes from phrasings and insights that aren’t just screaming for likes. Few writers are so wise and self-effacing and emotionally honest all in one breath… Over the course of nine beguiling pieces—which seamlessly meld observation and imagination—she effects an intimacy that makes us want to sit on the rug and listen … If obsession is a writer’s fuel, Beard is powered by the ‘beautiful and stupid’ acts of hanging on and letting go. Every line builds thematic texture, instructing us on how to read, and what to take from it all … Beard imagines her way into anything…If her essays read like stories that’s because she is less concerned with cold accounts, and drawn more to detail and interiority and the choices people do and don’t make … Invention allows her to excavate a deeper truth … Beard navigates the darkness with her signature wit.”

How Animal Intelligence Helps Us Speculate About the
Alien Mind 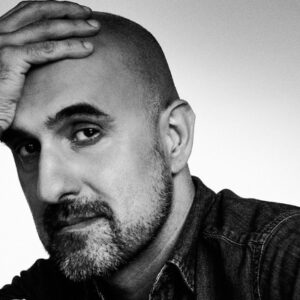 Hari Kunzru is the guest. His new book, The Red Pill, is out now from Knopf. From the episode: Hari Kunzru: What I wanted...
© LitHub
Back to top
Loading Comments...