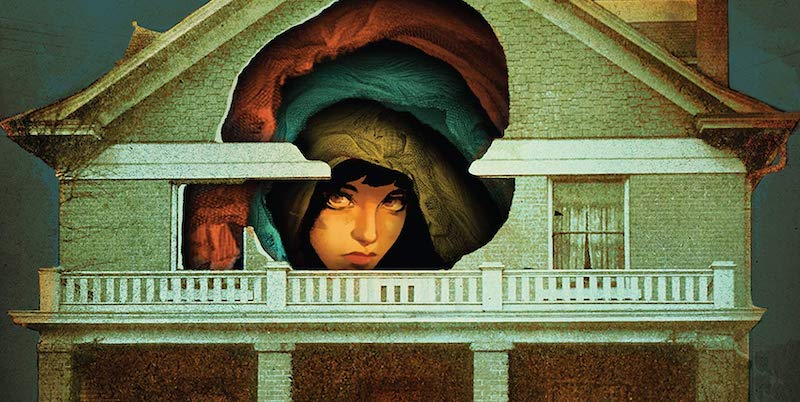 Thirty Two Short Films About Glenn Gould was a movie that had me thinking about narrative and memoir, biography and documentary and biopics—because it was all those things, along with being, literally, 32 short films about the pianist Glenn Gould. Various actors portrayed Gould, except when documentary footage was used. It was full of fact and conjecture, performance and pills, dialog and wordless scenes. Each segment showed another aspect of Gould, as if the truth of someone can only be gathered up and presented in pieces. I think it may have been then that I fell in unapologetic love for the less traditional autobiography or memoir. It was also then that I came to understand, as a writer, my impulse toward fragmented narrative, which had been the structure of my stories from the start.

In the late 1990s I began what I referred to as That Memoir Thing, which was a multiple book project that that was digressive and fractured and remains to this day unfinished. This project eventually turned into Art For the Ladylike: An Autobiography of Other Lives. I referred to it as That Autobiographical Thing in that if you know who and what I love you will know me. That you will understand my story. This book is a digressive mix of biography, feminism, art history, movies, and me (well, all of it is me, but there are memoir parts that are more overtly me).

Along with the book being my autobiography, it is also a companion piece to my novel Eight Girls Taking Pictures in that each book, one fiction, one nonfiction, draws on the same source material (though each book definitely stands alone). A kind of literary diptych, if you will. I wanted to see how the same story would change if approached from different angles.

Which brings me to the autobiographies and memoirs on this list and the way they remind us that while the years might progress in an ordinary, expected direction, memory does not. Dickinson wrote, Tell the truth but tell it slant. In these books, love, experience, ideas, and observations ignore the limitations of the linear story, building a more far more complex, complete narrative. The beauty of these books lies in how they move a little to the left, a detour off the beaten literary path. 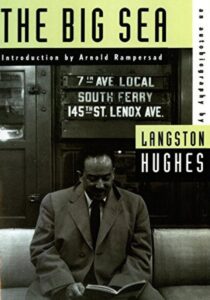 Here are the opening lines: “Melodramatic maybe, it seems to me now. But then it was like throwing a million bricks out of my heart when I threw the books into the water.” Any writer—in this case, one of America’s finest writers—who begins his autobiography by saying that dumping all his books into a river was a relief is a writer I must read. I adore this collection of titled anecdotes, memories, tales, and observations that move in and out of chronology. This beautiful collage, beautifully written, is cut-and-pasted, then reassembled, to describe a life that moves across continents (America, Mexico, France, Africa), and professions (merchant seaman, dishwasher, poet), depicting a life of the mind, coming of age, racism, loves. 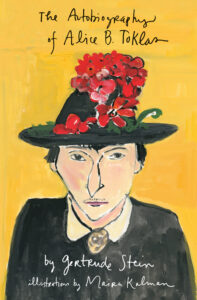 Gertrude Stein, The Autobiography of Alice B. Toklas
(Penguin Press)

How brilliant, how sly, to masquerade as someone else telling the story of your life, using the ruse that she is talking about her life, while frequently commenting on your brilliance. She even writes that she, Toklas-who-is-really-Stein, has an uncanny ability to recognize genius before anyone else. This book is Stein’s most accessible, most conventional writing (it was a bestseller) except for, you know, a structure in which she pretends to be someone else while writing her own memoir. Already well known for her other, nearly impenetrable work—the literary cubism, the send ups, the word portraits—Stein figured out how to talk endlessly and glowingly about herself without becoming that tiresome egotistical guest who simply refuses to leave the party. 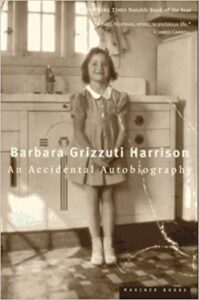 Grizzuti Harrison described her book as “An autobiography in which I am not the main character.” Not only am I enamored of this autobiography that is a sort of “anti-autobiography” (in the same way that Alice B. Toklas’s “autobiography” is more performance piece than straight story), but I love its structure. Forget beginning with the beginning—in fact, forget beginnings, middles, and ends—Grizzuti Harrison tells her eccentric story in chapters that reflect collections of people and things, with titles like “Breathing Lessons,” “Food, Flesh, and Fashion,” “Men and God (s),” “Rooms: Signs and Symbols,” “Loot and Lists and Lust (and Things).” Each chapter reads like an energetic, highly charged monolog on myriad topics her intellect always in motion, digressing, referring back to things she already wrote in order to make yet another point. It’s almost stream-of consciousness, but not quite—more like listening to someone who has traveled, loved, and has an awful lot of opinions about everything as they shuffle and reshuffle all those people and places and things, inviting the reader to construct a chronology of their life. 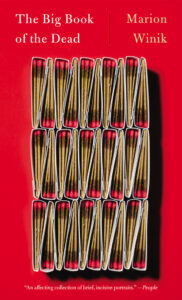 Marion Winik, The Big Book of the Dead
(Counterpoint)

When I was in high school and hanging around its little theater with the other theater kids, our teacher gave us Edgar Lee Masters’ Spoon River Anthology, a book I immediately loved for its thumbnail life dramas. The Big Book of the Dead is a compilation of Winik’s two previous “books of the dead” plus a few added obituaries, totaling 125 thumbnail tributes. I only mention this because the other books lacked narrative order, seeming like a pack of cards flung in the air, while this book is more loosely chronological, organized by geography.

I have loved Winik’s voice since reading her autobiographical essays collection, Telling. Here, we meet her friends, lovers, husband, parents, colleagues, neighbors, students, even a celebrity or two as she writes whimsically, movingly about their lives. Unlike Spoon River Anthology, this is a book of memory and the importance of memory, including the way those 125 memories all add up to the story of Winik herself. 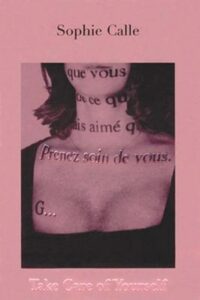 Technically, this book is an artwork of French conceptual artist Sophie Calle. Her many art pieces have included Chambermaid, for which she worked as a hotel maid in Venice, recording the objects and writings of the guests. With Sleepers she invited strangers to sleep in her bed, then photographed the results. Address Book, her most controversial art piece, involved finding a stranger’s address book, calling the numbers and interviewing those who answered about the owner of the book, then publishing the interviews. In Take Care of Yourself, Calle asks 107 women—friends and acquaintances representing a number of professions that often inform their interpretation of the letter—to analyze a breakup email sent to Calle by her boyfriend, an email that ends with “Take care of yourself.” Out of this extended conversation about one specific thing, Calle constructs a memoir of a lost love affair. 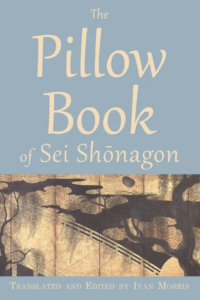 The Pillow Book of Sei Shonagon is the work of a court lady in Heian Japan (794 to 1185). I love its mix of the mundane and the poetic; she can also be petty, judgmental and self-critical. There are detailed descriptions of clothes and conversations and love affairs, all told in 186 brief entries with titles like “Outstandingly Splendid Things” or “It Is Very Annoying.” “Things That Should Be Large” followed by “Things That Should Be Short.” “Men Have Really Strange Emotions.” “Noon on a Summer Day.” Or, my favorite, “Things That Make the Heart Beat Faster.” The overall idea does not seem to be to construct a faithful chronology, but something more mercurial, more idiosyncratic. This assemblage of her observations, lists, musings and commentary isn’t as much about the Heian court as it is of Sei Shonagon herself as she lays out her life, in all its complexity, her sensibilities surprisingly contemporary. 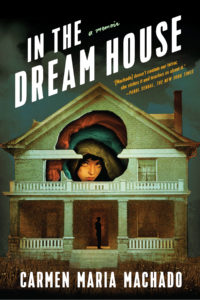 Can a concept be a literary structure? Can a haunted house illustrate an abusive relationship? Can queer theory and various academic ideas be a place where someone can live? Can anyone actually live in a dream house? Doesn’t the fact of it being a dream make it ultimately uninhabitable, no matter how great the longing? And is there a fine line between dream and nightmare and how is it crossed it without even realizing it? You and I are points of view used by the narrator as much as pleasure and betrayal find themselves bound together in the dream house. Every chapter begins with “Dream House.” “Dream House as Epiphany.” “Dream House as Erotica.” “Dream House as Shipwreck.” “Dream House as I Love Lucy.” “Dream House as Choose Your Own Adventure” records a moment between the narrator and her girlfriend, then offers the reader a series of page numbers that add to and drive the entire incident. I love this brilliant memoir. I love it. I love that it is as much about this one terrible love affair gone wrong as it is about the narrator. I love the repetition and prismatic quality of the dream house, invoked over and over, each meaning fresh and dazzling. 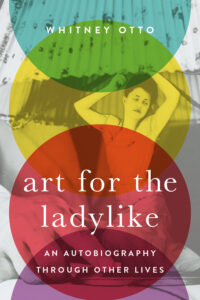 Art for the Ladylike: An Autobiography through Other Lives by Whitney Otto is available now via Ohio State University Press. 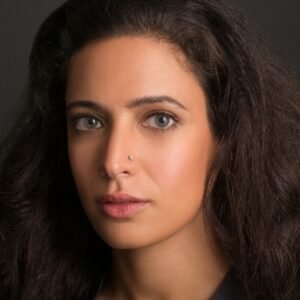 On this episode of Reading Women, Kendra talks with Hala Alyan, author of The Arsonists’ City, which is out now from Houghton...
© LitHub
Back to top
Loading Comments...