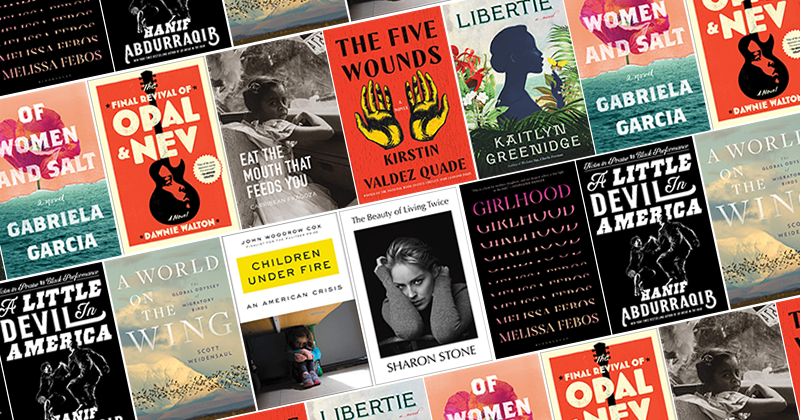 Kaitlyn Greenidge’s Libertie, Sharon Stone’s The Beauty of Living Twice, Melissa Febos’ Girlhood, and Hanif Abdurraqib’s A Little Devil in America all feature among the Best Reviewed Books of the Week.

“Greenidge is a master of character building … Libertie is set in the midst of the Civil War, but the place and time these characters are in doesn’t make them unfamiliar … Libertie is an easy page turner—its simple prose makes the plot digestible and the lyrical sentences sing louder … Because the book is written in the first person, readers are allowed to get intimate with Libertie’s thoughts. She keeps so much of the way she thinks hidden from other characters (for a myriad of reasons), that it’s an intimate joy to get a glimpse into her logical, sympathetic mind … a beautiful telling of gorgeously tragic characters who keep you rooting for them, even as they continue to stray and stray and stray.”

2. Of Women and Salt by Gabriela Garcia
(Flatiron)

Read an excerpt from Of Women and Salt here

“…has the feel of a sweeping family saga that’s hard to reconcile with its slender profile … While Gloria’s agonizing story of modern immigration has a ripped-from-the-headlines feel of authenticity, the novel is richest when it delves into Jeanette’s family’s past and present in Cuba. Her ancestors’ lives are intimately entwined with the history of Cuba, and the writing in these chapters is lusher, less set on making a point, and more engaged in the particulars of telling a great story … As the novel moves through time and place, Garcia explores how the political is always personal and how generations of women can pass along both strength and sorrow. At its heart, Of Women and Salt is a sad, deeply American story about the pieces of self people leave behind on their journeys to become ‘Americans.'”

“This novel is so good, I want to rent a velvet-swagged amphitheater and gather a large audience to blare through a microphone just how much I like it … Ingeniously structured … Writing about music is tremendously hard. Writing about fictional music is surely even harder—but with artful juxtaposition and Zelig-like placement of made-up characters with real ones (Dick Cavett!), the author has conjured an entire oeuvre of lyrics, licks and liner notes that is backdrop for some of the most pressing political issues of our era, or any era. The story Sunny ‘tells’ using the tools of journalism is propulsive, often funny and thought-provoking. Like the best fiction, it feels truer and more mesmerizing than some true stories. It’s a packed time capsule that doubles as a stick of dynamite.” 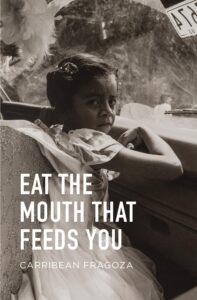 4. Eat the Mouth That Feeds You by Carribean Fragoza
(City Lights Books)

Read an excerpt from Eat the Mouth That Feeds You here

“Throughout this charmingly strange collection, Fragoza shows the reader that death is not as Wittgenstein describes it—here, death is both lived through and experienced, and Fragoza uses the unreal in fiction to report from the other side. In these 10 fabulist tales, the body and the inevitability of loss shimmer, and each story moves effortlessly between horror and the real. In the tradition of Surrealists like Leonora Carrington, who once wrote, ‘Houses are really bodies,’ Fragoza has plunged into the depths of her characters’ psyches and the unruly abodes in which they now find themselves … In a way, all story collections function as a type of body, each tale an individual organ or limb that contributes to the whole. This is particularly true of Fragoza’s intensely corporeal book … The story asks enormous questions about the basis of faith and violence, especially violence enacted upon women and girls at the hands of men … an accomplished debut with language that has the potential to affect the reader on a visceral level, a rare and significant achievement from a forceful new voice in American literature.”

“Quade’s penetrating debut novel (expanded from a story in Night at the Fiestas) tells of a man’s quest for self-acceptance through the metaphor of the five wounds Jesus suffered during crucifixion … The well-developed characters convey palpable emotion as Amadeo’s failures as a father, partner, entrepreneur, and even as Jesus translate into fits of rage and frustration. Quade’s rendering of a singular community is pitch perfect.”

Read an excerpt from Girlhood here

2. A Little Devil in America: Notes in Praise of Black Performance by Hanif Abdurraqib
(Random House)

“It’s an absolutely brilliant book from a critic who’s become one of the country’s most essential writers … Abdurraqib proves to be remarkably gifted at exploring all angles of a topic, linking them in deft and unexpected ways … It’s fascinating to witness Abdurraqib go from place to place and end up somewhere unexpected, but somehow perfect. In one of the most powerful pieces in the book, Abdurraqib reflects on performances of softness, drawing on topics like his mother’s death and the Wu-Tang Clan’s music video for ‘Triumph’ … he’s a brilliant writer, but also a deeply generous, loving one. Critics, as Abdurraqib would know, are taught to avoid superlatives, but sometimes there’s no other choice. To call Abdurraqib anything less than one of the best writers working in America, and to call this book anything less than a masterpiece, would be doing him, and literature as a whole, a disservice.”

3. A World on the Wing: The Global Odyssey of Migratory Birds by Scott Weidensaul
(W. W. Norton & Company)

“There is no one better at dressing the natural-history stage than Mr. Weidensaul. His prose is front-loaded with visual, aural and olfactory information that place the reader at his side, wherever he goes … Mr. Weidensaul takes us to places we’ll likely never go, then deftly steps back to let us experience the scene. In an era when travel, for most, has sputtered to a stop, A World on the Wing is a bracing tonic. The author slips in facts and figures so painlessly, so richly embedded in emotional context, that you can absorb and truly appreciate their import. Soon you begin to understand that the life cycles of many birds demand that they routinely traverse half of the globe or more … But the book is more than a celebration of astonishing avian feats. Chapter after chapter reveal the giant leaps in knowledge that occur when miniaturization and GPS technology are applied to the legs and backs of birds … a paean to the beauty of data, viewed in masses, and to citizen science taking ornithology by storm … Mr. Weidensaul offers the astonishment of birds’ travels, deep concern for their populations and hope for their future in well-measured, beautifully realized doses.”

“Cox’s Children Under Fire: An American Crisis lays bare the human cost of things that cannot be counted when it comes to children and gun violence. Statistics on this issue have become so familiar that many Americans have become numb to the society they describe. On average, one child is shot every hour; over the past decade roughly 30,000 children and teenagers have been killed by gunfire—recently eclipsing cancer as their second-leading cause of death … These children are the focus of Cox’s book, which makes their lived reality vivid and distressing by concentrating on two who are dealing with trauma after gun violence claimed a loved one … The other element for which there can be no accounting in this engaging book is trust. Nonfiction of this kind cannot be crafted from a few phone calls and fleeting visits. It comes through an investment, both human and professional, that grants the writer a glimpse into the lives of people at their most vulnerable; they open up only if they feel confident the writer will do their stories justice. Earning their confidence takes time. We see Cox’s investment pay off when he witnesses one of Ava’s tantrums, sparked by her mother asking her not to stand on the couch … Opting to be descriptive rather than prescriptive, he draws a painful, critical picture of what a society with virtually unfettered access to lethal weapons looks like through children’s eyes instead of lecturing the reader on politics and policy … this book demonstrates that the most effective riposte to those who fetishize bearing arms is to bear witness.”

5. The Beauty of Living Twice by Sharon Stone
(Knopf)

“… an unusually readable Hollywood memoir … It’s the stuff of promotional profiles to observe that there’s more than meets the eye when it comes to a famous person, but Stone is a celebrity so classic that all the clichés seem fascinating in her case … Insightful first-person writing about the experience of being commodified is rare; there aren’t exactly a lot of her peers around, let alone ones who can write. But Stone does seem to have written the book herself … She’s a good storyteller … The gossipy moments in this book are juicy…Her occasional lapses into divahood, meanwhile are frankly more entertaining to read than the more virtuous edit of the same event would have been. There’s a touch of Eve Babitz to her style … She depicts childhood abuse with exquisite control … Stone is a strong portraitist of the instant in time, and aware that stardom, like identity, is mostly a phenomenon of the memory—the true movie star is the one you remember compulsively, long after seeing her on screen. That person is now a memory to herself.”