Yet we wrote such novels, in 30 days, surrounded by the hustle and bustle of open wing prison life and all the distractions. We all came to the table with the same desire: to tell our tales to the best of our abilities.”

Writing a novel can feel like a lonely, thankless task. We scribble in the corners of drafty attics; we hurl crumpled papers into an overflowing waste bin. We agonize over this character’s backstory, that scene’s structure. In short, we suffer.

What we sometimes forget is that writing is also joyful and restorative; that stories can break down boundaries, and that the simple act of writing alongside another can be enough to forge an intimate connection—where before there was nothing but a blank page.

“The most challenging part of writing as a group is allowing ourselves to deconstruct the barriers we’ve all built around ourselves and peek out at the world around us, our fellow people, and come together for the sole purpose of expressing ourselves on the page,” said Derek Trumbo.

This November, Trumbo and nine other incarcerated writers in four facilities (Northpoint Training Center in Kentucky, Sing Sing Correctional Facility and Attica Correctional Facility, both in New York, and Minnesota Correctional Facility-Faribault) participated in National Novel Writing Month (NaNoWriMo). Alongside thousands of other participants around the globe, these writers took on the ambitious challenge of banishing their inner editor, writing with abandon, and completing the first 50,000 words of a novel in just thirty days. They woke up early; they wrote by hand. They searched for tablespace, for a moment of quiet. Because of the COVID-19 pandemic, some wrote alone in their cells without the ability to share or confer. Others were moved to crowded, unfamiliar units in an attempt to control the virus’s spread.

“When my fellow writers would sacrifice sleep to join me at the table to write at 4AM in order to do our writing before the crowds and noise started, I knew that everyone was serious about staying healthy and focused during COVID,” said Trumbo, who also acted as a peer facilitator.

What we sometimes forget is that writing is also joyful and restorative; that stories can break down boundaries, and that the simple act of writing alongside another can be enough to forge an intimate connection.

This fall marked the second annual partnership between NaNoWriMo and PEN America’s Prison and Justice Writing Program. Both nonprofits are driven by the goal of helping people tell their stories. In addition to National Novel Writing Month in November, NaNoWriMo runs several other writing events throughout the year, supports teachers and students in nearly 10,000 classrooms as part of its Young Writers Program, coordinates “write-ins” in 650 regions around the world, supports writing programs in nearly 1,000 libraries and community spaces, and maintains a website for writers to connect, learn, and track their writing goals throughout the year. PEN America’s Prison and Justice Writing Program works to amplify the writing of imprisoned writers by providing free resources, skilled mentors, and audiences for their writing. Together, the organizations offered creative writing resources, pep talks from published authors like Kacen Callender and Elizabeth Acevedo, and, perhaps most important, community to writers on the inside.

“Alongside the NaNoWriMo team, we have been able to carry out a central tenet of our work this past November: to empower incarcerated writers to forge writing communities on their own terms as well as connect them to the wider literary landscape outside the prison walls,” said Mery Concepción, Volunteer Program Coordinator for PEN America’s Prison and Justin Writing Program.

This year, each writer was also paired with a volunteer on the outside. These pairs communicated throughout the month of November (with many planning to continue working together), and though these volunteers were called “mentors,” the relationship was framed as a more reciprocal one.

“[My mentor] being there through the challenge truly made me feel like I was a part of a real writing community,” said participant William Daniels. “I think that the most poignant advice given to me by my mentor (Julia) was that our worst enemy as writers is to stop, and not press forward.”

NaNoWriMo’s guiding principles include banishing the critical inner editor, taking creative risks, finding inspiration by showing up to write—and to focus on finding quality in moving the story forward on the page, not by anguishing over finding perfection in a rough draft. It’s persistence, not perfectionism, that will pay off in the end.

Daniels’ mentor Julia Hannafin said the partnership gave her new insight into her process. “Sometimes I’m too attached to linear storytelling, to communicating a plot so thoroughly that the mystery is gone. My fellow writer writes out of chronological order often, writing forward and back and in between, sketching in the gaps through what he’s able to write on each side. That inspired me and shook up my thinking about how my own restrictions are not working in generative ways.”

She added, “I began the month wanting to participate in some of the community-making that keeps me accountable as a writer, as well as connected as a human being, and I found that I did not just take part in making that; I was given it. Or rather we made that together.”

Forming community bonds were often challenging because of the pandemic, though.

“As a health precaution I had to be constantly moved in efforts to combat this virus,” said participant Mohammed Monsuri. “Despite these impediments I was very much encouraged by my writing mentor. I found myself thinking about my project at various times throughout the day thanks to his prompts. I wasn’t able to complete the requirement; however, I plan on continuing to develop my novel… I now view myself as a fledgling writer.”

Writing a novel in thirty days isn’t easy; writing a novel in prison during a global pandemic is even harder. But, at the end of the day, that’s who these participants were: writers, with all the associated ups and downs. Struggling to reach a word-count goal, to tell a meaningful story, to push through writer’s block and connect with an imagined future reader.

“I think the biggest challenge to the whole experience was actually getting started,” said participant Andrew Phillips. “I had a lot of ideas but not that really held my attention as a writer and I thought would actually have wings, and by that I mean, I like to write for the purpose of seeing the things I write have readers and effect and audience in some type of way, even if it’s only fifteen family and friends.”

Writing a novel in such conditions helped the incarcerated writers learn about the boundaries they could push as writers.

“Last year I tried to write the first of a major saga. It proved to be too much for me to grapple with in a single month,” said a participant who preferred to remain anonymous. “This year I set my goal a bit more reasonable. I set out simply to write a story with a beginning, middle, and end as close to 50,000 words as possible. I did it in 55,000. It felt great!”

That accomplishment is no mean feat—in 2020, only 15% of the approximately 300,000 writers who started the NaNoWriMo challenge ended up meeting the final word-count goal.

Writing a novel in such conditions helped the incarcerated writers learn about the boundaries they could push as writers.

“The greatest reward by far was to finally finish a full draft of the manuscript (106,355 words!) in just 21 days of actual writing…it feels so very rewarding to set goals for oneself, and to meet those goals,” said Daniels. “The NaNoWriMo challenge is a fantastic proving ground, not only of our ability to put forth our craft under the most adverse of conditions, but to show us what we are capable of achieving, if only we apply ourselves.”

It should be noted that there are deep, structural problems with our justice system that a month of novel writing and literary community will not solve. The U.S. makes up 5% of the global population but has nearly 25% of the world’s prison population—that’s almost 2.3 million people in jail and prison today. Racism is embedded in the system: one out of every three Black boys and one out of every six Latino boys can expect to go to prison in his lifetime, compared to one out of 17 white boys.

Can writing a novel in a month fix all that?

Probably not. But a pathway forged by a creative connection offers valuable hope.

“Purpose doesn’t come easy in the prison industrial complex. In the land of misfit and broken people, even the most useful lose their way in the miasma of uselessness. NaNoWriMo’s challenge offered a way through the haze of prison life, the holidays, and daily strife. It offered an outlet,” said Trumbo.

It also offered a way to feel the power of their voice in the world.

“One thing was Derek confirmed what I already thought, which is that harm doesn’t come from nowhere and that everybody deserves to be listened to and have their full stories told,” said Trumbo’s mentor Nicole Grennan. “But besides that, Derek taught me that few things are more important to our humanity than the space to express yourself and be heard.”

Though our methods differ, both NaNoWriMo and PEN America’s Prison and Justice Writing Program hold dear the belief that stories matter, and that by helping people tell their stories, we can enact real and lasting change.

Whether the space we create is virtual or in-person; in a classroom, living room, or open prison wing. Whether the story is typed on a laptop, penned on loose sheets of paper, or tapped into a JPay tablet. No matter what else may be going on in the world—your story matters. Express yourself and be heard.

Marya Brennan writes, works, and walks her dog in Oakland, California. She is the Director of Programs at National Novel Writing Month (NaNoWriMo), and a proud alum of the Sewanee Writers’ Conference, the Tin House Summer Workshop, and The Writers Grotto Fellowship Program. She has work in The Florida Review. 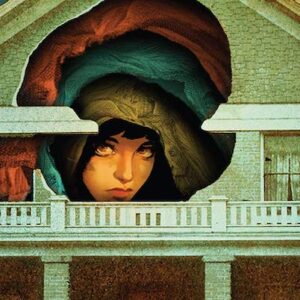 Thirty Two Short Films About Glenn Gould was a movie that had me thinking about narrative and memoir, biography and documentary...
© LitHub
Back to top