Soledad Fox Maura asks if it’s finally time to ditch the label “domestic fiction” • Eman Quotah reflects on creating her own literary tradition • Joyce Maynard on the day she spent with Christa McAuliffe before the Challenger disaster • adrienne maree brown on cancel culture and transformative justice • James Geary on collecting the poems of Alvin Feinman • Carys Davies on writing about political crisis • P. Carl on the 22 books that helped him write about transitioning • A brief history of the death penalty in America • Danielle Geller traces her mother’s footsteps • Rhian Sasseen on learning how to ride a bike as an adult • Mark da Silva on the value of writing a book that might never be read • Gabrielle Glaser on the history of “girls in trouble” • Kaori Fujimoto on the highs and lows of learning to write in a second language • Michelle Duster remembers the legacy of Ida B. Wells, her great-grandmother • Robert Michael Pyle on the life cycles of a place • Now that the COVID-19 vaccine is here, can we start daydreaming about travel again? • Najib Sharifi and Shafi Sharif remember photojournalist David Gilkey • What do Michael Jordan and the Dalai Lama have in common? • Alexander Weinstein on the role of spirituality in storytelling • What it’s like to record a 29-hour audiobook with President Obama • Todd Robert Petersen on that weird monolith that showed up in a Utah canyon • Maurice Chammah on what journalists can learn from reading fiction • Congresswoman Barbara Lee remembers her mentor, Shirley Chisholm • Liese O’Halloran Schwarz wrote a novel about family secrets—and finally dug into her own

Announcing the 2021 Edgar Award Nominees • Kate Lansing celebrates the rise of the millennial cozy • All the debut mysteries to check out this January • Eliza Jane Brazier with 10 novels that explore true crime fandoms • Curtis Evans on the murderous hitchhiker who captured a nation • Milan Terlunen on Psycho, Les Diaboliques, and the subtle art of the shocking plot twist • The best international crime novels out in January • Paul Vidich considers the possibility that his father was a spy • Here are the best reviewed crime novels of the month • Randy Wayne White on going from fisherman to thriller writer 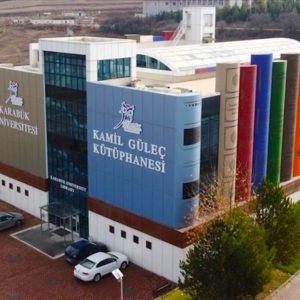 Here's something wonderful: Karabuk University’s library, in Karabuk, Turkey, is designed to look like a row of large books...
© LitHub
Back to top