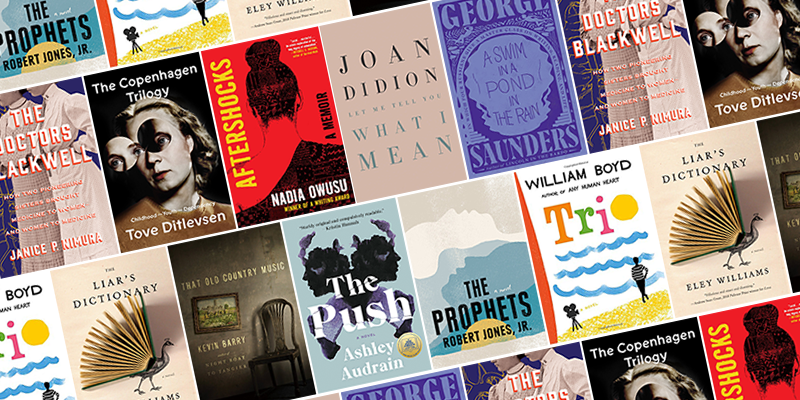 Joan Didion’s Let Me Tell You What I Mean, Robert Jones Jr.’s The Prophets, Tove Ditlevsen’s The Copenhagen Trilogy, and George Saunders’ A Swim in a Pond in the Rainall feature among the January’s best reviewed titles.

Read an excerpt from The Prophets here

“Meeting yourself in media is no guarantee that the mirror will be kind or wanted. Instead, it’s often a jagged glass you catch yourself in before it catches you. And even when you know it’s coming, the blood’s still warm and sharp. What of me, of us, was I to witness in The Prophets, the debut novel of Robert Jones Jr., set on an antebellum plantation in Mississippi? … What I found was an often lyrical and rebellious love story embedded within a tender call-out to Black readers, reaching across time and form to shake something old, mighty in the blood … One of the blessings of The Prophets is its long memory. Jones uses the voices from the prologue to speak across time, to character and reader alike. These short, lyric-driven chapters struck me as instructive and redemptive attempts at healing historical wounds, tracing a map back to the possibility of our native, queer, warrior Black selves. These voices are Black collective knowledge given shape, the oral tradition speaking in your face and setting you right … What a fiery kindness […] this book. A book I entered hesitantly, cautiously, I exited anew—something in me unloosed, running. May this book cast its spell on all of us, restore to us some memory of our most warrior and softest selves.”

Read an excerpt from Trio here

“It would be hard to think of a living novelist whose books encompass more history, more settings, more professions, more varieties of individual fate, than William Boyd… For readers who go to fiction for the pleasures of panoramic sweep, elaborate plotting and the company of a humane, genial intelligence, he has become one of the preferred masters. His new book, Trio, delivers much of the same set of literary goods, with perhaps a lighter touch than usual … More than just a clever authorial performance, the structure underpins a sustained preoccupation with the tension between fate and chance, art and accident, script and improvisation … Its settings (especially the pubs) are sharply observed. Its humor and melancholy are comfortingly English, premised (like the old British sitcoms it also resembles) on the supposition of a helpless collective commitment to folly. It’s a satisfying production, entertainingly retro, like a ride in Talbot’s beloved vintage Alvis coupe … It seems churlish to wish—though I did—that the mission had been a touch more dangerous.”

Read an excerpt from The Liar’s Dictionary here

“Have you ever caught a Mountweazel? Before reading Eley Williams’s beguiling first novel, I’d never heard of them. But Williams is an expert. She wrote her doctoral dissertation on them, and then she put her hard-earned knowledge to further good use in The Liar’s Dictionary, which is to word lovers what potato chips are to my husband—minus the guilt … Williams’s novel raises questions about the instability of language, how words gain currency, and whether fake words are any less real than actual words … The Liar’s Dictionary belongs to a subgenre of historical fiction that toggles between two parallel narratives—set in the past and the present—which cleverly play off each other, unraveling mysteries and juxtaposing epiphanies in both strands … The Liar’s Dictionary, ‘queasy with knowledge,’ is an audacious, idiosyncratic dual love storyabout how language and people intersect and connect, and about how far we’ll go to save what we’re passionate about. It’s hard not to love … Read this clever volume for yourself, from A to Z.”

“… a story brimming with both the desire for and the fear of strong feeling, handled with a loose, supple comedy … Barry holds myth-making and dull reality in teasing balance, with a kind of comic double vision winking at the operatic and the bathetic by turns … Fate, doom and disaster are lightly invoked, and swiftly brought down … Barry’s rich comic and lexical gifts have shone particularly in his short fiction…The stories collected here are more relaxed, whimsical, even impressionistic … Barry in mellower mood is more subtle and surprising … However brokenhearted, Barry’s stories always sing.”

Read an excerpt from The Push here

“… taut, chilling … Blythe’s postpartum experience is familiar, and Audrain renders it flawlessly… Audrain has a gift for capturing the seemingly small moments that speak volumes about relationships … Audrain conjures the disintegration of marriage, along with the legacy of intergenerational trauma and the pain of parental grief, so movingly that the extent to which Blythe goes off the rails doesn’t seem that far-fetched … Occasionally the second person gets repetitive, and I found myself longing to hear Fox’s voice—or anyone else’s, really. But the chapters examining Blythe’s family’s past provide texture, and the narrative feels more balanced once Fox’s partner is tricked into dishing on their life, even asking Blythe for parenting advice. Finally, someone thinks she’s a good mother.”

1. A Swim in a Pond in the Rain: In Which Four Russians Give a Master Class on Writing, Reading, and Life by George Saunders
(Random House)

“This book is a delight, and it’s about delight too. How necessary, at our particular moment… I love the warmth with which he writes about this teaching … This kind of reading (one of the best kinds, I’m convinced) tracks the author’s intentions—and missed intentions, and intuitions, and instinctive recoil from what’s banal or obvious—so closely and intimately, at every step, through every sentence … All this makes Saunders’s book very different from just another ‘how to’ creative writing manual, or just another critical essay. In enjoyably throwaway fashion, he assembles along his way a few rules for writing … reading…with this rich, close attention will mulch down into any would-be writer’s experience, and repay them by fertilising their own work eventually … One of the pleasures of this book is feeling his own thinking move backwards and forwards, between the writer dissecting practice and the reader entering in through the spell of the words, to dwell inside the story.”

“Ms. Nimura places the stubborn, brilliant Blackwell sisters in an America that seems both utterly foreign and jarringly familiar, and she does so at a moment when we’re forced to confront the limitations of the medical orthodoxies and public-health initiatives of our time … Ms. Nimura’s chronicle of the loneliness of the Blackwells’ path, made harder by their habitual unwillingness to compromise or accommodate, is enormously affecting. As in this author’s previous book, she is wonderfully attentive to nuances and contradictions, noting Elizabeth’s internalized misogyny as she deplored the silliness of women and aligned herself with men … Small, memorable details pop up throughout the book…Yet it’s the largeness of this story that most impresses. It ranges through European capitals and many American cities during a time when travel was arduous and slow. Along the way, encounters with a surprising number of notable figures emerge … Ms. Nimura’s portrait of the Blackwells’ America blazes with hallucinatory energy. It’s a rough-hewn, gaudy, carnival-barking America, with only the thinnest veneer of gentility overlaying cruelty and a simmering violence … fits as a vivid echo of our own America, suspended as we are in another feverish moment of both crisis and opportunity.”

Read an excerpt from The Copenhagen Trilogy here

“What might seem in other writers a retroactive precocity is believable here. Ditlevsen is self-deprecating and effective at conveying the fish-eye view of a child in a claustrophobic environment; she understands that part of the memoirist’s job is to remember how life felt and synthesize it in a way she couldn’t have at the time … Ditlevsen is a master of slow realization, quick characterization, and concise ironies… The appeal of a memoir is not that it contains stable facts, but rather a stable perspective, and part of the propulsion of these odd books is Ditlevsen’s steadiness … Her unlikely success as an advice columnist must have had to do with her ability to see herself as clearly as she saw others, which involved seeing how she was different … What is superficially unstable is revealed to have a much deeper connection to real events than it appears; it’s the book’s separation from reality that allows it to express what is true. Similarly, when Ditlevsen published her first poetry collection, she thought, ‘The book will always exist, regardless of how my fate takes shape.’ To bring things back to marketing, this means you don’t have to advertise that an author died by suicide on the back of her book. The work is important; the fate is merely a fact.”

Read an excerpt from Aftershocks here

“For a young woman whose foundations were shaken several times in her life—including numerous moves to locales with literal tectonic rumblings along with the more metaphorical tremors of civil unrest—[Owusu’s] approach effectively portrays the inner angst of individuals who have grown up amid trauma and have learned to be vigilant, to read the slightest shifts as foreboding. Owusu’s narrative deftly demonstrates a keen sense of others’ emotional states … It takes a skillful hand to weave complex concepts so seamlessly into a narrative, and Owusu executes this masterfully. By relating the events of her upbringing, she is also telling the story of her father and the history of the countries that had become home to her … While Owusu displays a reverence for her background, she also addresses some potentially harmful cultural practices … Unable to find stable ground, Owusu centers her narrative on her body, which she brilliantly reclaims in these sections … you will journey across countries, hear numerous languages, and feel how deep a loss can go.”

5. Let Me Tell You What I Mean by Joan Didion
(Knopf)

“Let Me Tell You What I Meanarrives with the uncommon weight of expectation, and not a little bit of fear—in the purely morbid sense that this could be her last, yes (at 86, she’s only mortal), but also that her legendary instincts might have faltered, a late-game blot on her legacy … slim but satisfying … In nearly every paragraph, though, are hallmarks of what Als calls ‘the Didion gaze’—the callbacks and repetitions, the clean snap of a telling detail, the almost pathological aversion to sentiment and cliché … a visionary who for more than half a century has shown us how to look through a glass darkly, and see anew.”

What Fiction Can Teach Journalists: A Reading List From Maurice Chammah 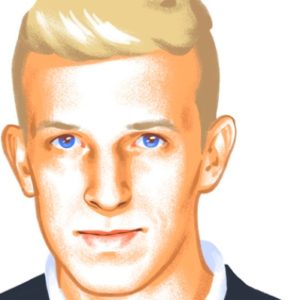 How To Proceed is a bi-monthly conversation about writing, creativity and the world we live in. Author Linn Ullmann talks...
© LitHub
Back to top
Loading Comments...