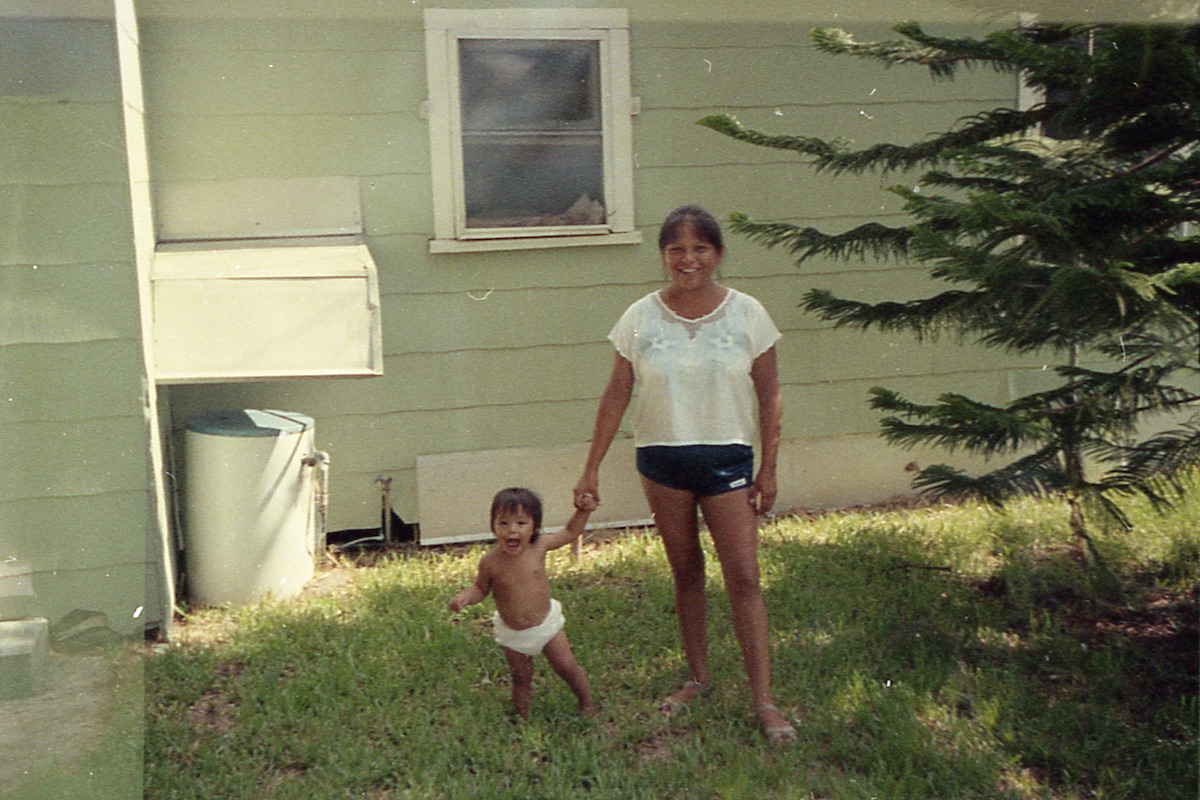 My mother left the Navajo reservation almost as soon as she could. At nineteen, she moved to the city, as many do, to continue her education. In a brown and water-stained copy of an incomplete job application, I found evidence of these early years: From April 4, 1983, until July 1, 1984, she took classes on cultural awareness, health education, and leadership at the “Albuquerque Job Corps Center.” (“It was the best,” a woman who attended the school in the late 80s wrote in a recent Google review. “I will always remember the good times I had.”) For work experience, my mother found part-time jobs in retail at Kirtland Air Force Base; as a file clerk at the “Albuquerque Rehab. Med. Center”; and as a typist at the “New Mexico State Labor Com.,” a position she held for only a month.

In August, my mother moved to Prescott, Arizona, and began working as a waitress at the “Palace Hotel Restaurant,” where my parents met. My father told me they met at the Hotel St. Michael, which was not true, but my father always loved the sound of his own name.

My father worked for his brother’s computer company as a traveling technician. Those were his glittering days: He charged expensive rental cars to disposable credit cards and drove back and forth across the country. He gave the keys to his cars and hotel rooms to the homeless and traveling people he met. He dropped acid in the desert and once, he claimed, met a man entirely surrounded by a golden aura—Jesus Christ himself.

The way my father told their story, I always believed my parents fell in love quickly. That after those early smoke-filled nights, she left with him when he returned to Florida, where I was born in the summer of 1986. But the application I found was dated March 27, 1985, a few months after she quit her job in Prescott and moved back to New Mexico. The reason given: “Looking for Another type of job.” When I asked my father how my mother got to Florida, he said she called him months after they first met. “I could come see you,” she said.

When I called Eileen to tell her our mother was dying, I wasn’t sure what words to use. I repeated the doctor’s words: Sick. Heart attack. Nonresponsive. Very, very sick.

She asked, from a distance, what I meant.

Eileen and I were not good sisters to each other. We never held each other, and we didn’t end conversations with love. But in that moment, I would have given anything to take her in my arms, to give her some small comfort. “Her heart doesn’t work anymore,” I told her. “She’s not going to get better.”

“What?” My sister’s voice edged on anger, an anger I had always feared.

“She’s dying,” I said, simply, and then listened as her anger dropped into heavy, wracking sobs. I couldn’t take my words back, and I couldn’t think of anything else to say. All I could do was listen to her cry until she finally decided to hang up.

The way my father tells it, my mother was wrong and the police were wrong and my memories were wrong.

She called me a few hours later. Her voice sounded like smoke rising, faint and curling. She was high. She asked if I planned to go down to Florida.

I had been sitting in front of my computer with flights mapped out, but I hadn’t been able to convince myself to buy a ticket. I wasn’t sure I wanted to go.

“Someone has to be with her,” Eileen said. She was somewhere in Montana, and she said she would try to buy a bus ticket, but she worried she wouldn’t make it to Florida in time.

The walls of my room were painted cornflower blue. “I’ll go,” I promised.

“You can’t go down there alone,” she said, but we both knew I would. “I’m sorry, Danielle,” she added, beginning to cry again. “I’m sorry.”

A few months after my mother moved to South Florida, she was pregnant with me. My father claimed she could get pregnant off a toilet seat. My father’s mother convinced her to keep the baby, and she offered them a two-bedroom apartment in a building she owned on Nokomis Avenue, a chalk-white dirt road.

Our neighbors were inconstant. My grandmother’s tenants were as poor as our neighborhood, and no one seemed to stay for long. She liked to tell the story of one of her tenants who dragged all his furniture, even the refrigerator, onto the lawn in the middle of the day. She couldn’t get a reason out of him—he talked nonsense, raving about who knew what, so she called an ambulance. Later she found out his rotting teeth were the cause of his madness, but she found the story funny and laughed each time she told it.

I was too young to remember most of our time in that apartment, but in my mother’s things I find a soft paper envelope labeled with her neat script: “Birthday Negatives, July 28, 1987.” When the pictures were taken, I had just turned a year old. In some of the photographs, I wear a white jumper; in others, only a diaper. Over one shoulder I carry my favorite pink blanket, whose corner will rough and wear from the constant rub of a finger soothed by its exposed stitch. My mother and my father and my grandmother, Evelyn, are all here.

The way my father tells those early years, my mother was the one who hit him. Angry-drunk, she whipped him with the cord of an alarm clock, and then she called the cops. My mother and the neighbors and I stood in our gravel driveway and watched the police chase my father down the road, around the block. The dust settled soft and white.

The way my father tells it, my mother was wrong and the police were wrong and my memories were wrong, because I did not remember the violence the way he wanted me to. I remember my father’s shadow in the doorway in the moments before he threw my mother to the floor. The way she curled up under the kitchen table and stayed there, sobbing, even after he was gone. She told me to get rid of his beer. I pulled the chair over to the sink and dutifully poured each can down the drain.

The nurse frowns and shakes her head. “We were told she didn’t have any family.”

My mother stayed for years after that fight, after many fights, but I remember one of her early leavings. She took my sister and me to the women’s shelter at the Salvation Army. The light was all cream and yellow. We caught head lice from the shelter’s temporary beds. My grandmother convinced my mother to go back to my father, her son, the way I imagine she always did. Once home, my mother washed our long hair with the special shampoos and picked the nits off our scalps with a comb, but my father, impatient, went to the store and bought a new hair buzzer. I watched him lift the buzzer from its polystyrene cradle. I cried as he cut off all my hair.

Florida is unchanged and true to memory: fulgid sunlight and flat horizons, broken only by palm trees and scrubby pines. The parking lot at the JFK Medical Center sprawls confusingly, and I circle it twice. After I park, I follow a couple into the building, but as I step onto the sidewalk, a small bush rustles, and a curly-tailed lizard lands on the ground in front of me. I jump back, both startled and embarrassed. I caught lizards as a kid—even wore them like earrings, their small mouths clamped to my earlobes, their thin bodies wiggling against my neck—but this place, this lizard and I, have become strangers. I watch him for a breathless moment: his mouth open, his sides heaving. Then he darts across my path and disappears into another small shrub.

I enter the lobby through a pair of tinted glass doors and approach the officer at the front desk. He positions me in front of a camera and prints my badge on a sticky label, then directs me to an elevator down the hall. Inside the elevator, I inspect the photo on the badge: a grainy shadow you might call me.

I follow his directions out the elevator and down the hall to the critical care unit, quiet and cold. The curtain in front of my mother’s room is open. Standing beside her bed, a nurse delicately washes her face.

I waver at the threshold, and when the nurse glances in my direction, she startles, as if I were a lizard landing on her path. “Who are you?” she asks.

The nurse frowns and shakes her head. “We were told she didn’t have any family. Nobody’s been here to see her.”

Her words land sharp and heavy on my heart. I glance at my mother’s face, wrinkled and sun worn. Who did they imagine my mother to be? Another homeless woman, unloved and forgotten? Slowly, I walk toward her and rest my hands on the rail of her bed. “I came as soon as I could,” I say—in her defense, and mine. 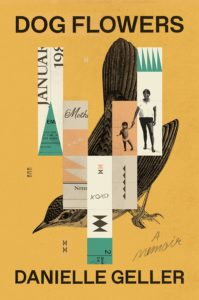 From Dog Flowers © copyright 2021 by Danielle Geller. Published by One World, am imprint of Random House, a division of Penguin Random House. Reproduced by permission.

Danielle Geller is a writer of personal essays and memoir. She received her MFA in Creative Writing, Nonfiction at the University of Arizona and is a recipient of the 2016 Rona Jaffe Writers’ Awards. Her work has appeared in The New Yorker, Brevity, and Silk Road Review and has been anthologized in This Is the Place (Seal Press, 2017). She is a member of the Navajo Nation: born to the Tsi’naajinii, born for the white man.

On the Ableist Attitudes That Framed V.C. Andrews as a Character in One of Her Novels 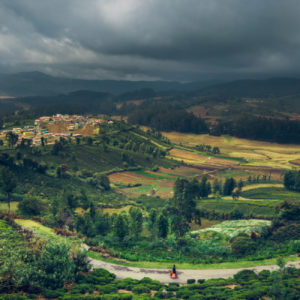 What struck me most forcibly, watching events unfold at the Capitol in January, was how long it had taken us to really grasp...
© LitHub
Back to top
Loading Comments...