Rhian Sasseen Explores the Connection Between Person and Machine

“The bicycle was still there,” writes Simone de Beauvoir towards the beginning of her second novel, The Blood of Others, “brand new, with its pale-blue frame and its plated handlebars … It was so lissom, so slender, that even when not in use it seemed to cut through the air.” There is something wildly seductive about this bicycle, something that compels Beauvoir’s heroine, Hélène, to go so far as to contemplate theft. Implicit in the description of this bicycle is a sense of freedom, and a mechanical beauty; Beauvoir herself was a committed cyclist after learning as an adult and receiving her first bicycle in 1940 at the age of 32.

I thought of Beauvoir often this last summer when I, too, learned how to ride a bicycle as an adult. For years when I told friends, loved ones, and acquaintances that I didn’t know how to ride a bike, they were shocked. “I didn’t even know it was possible to make it to adulthood without learning,” an old boyfriend once remarked, and I wasn’t entirely sure how it had happened myself. My own mother was surprised to learn that she had not taught me. “You don’t know?” she once asked me over the phone, astonished and perplexed by her own parenting. But no: For much of my life I have either walked places or taken public transportation, enjoying, as Virginia Woolf wrote in her famous essay on “street haunting,” the “passing, glimpsing,” how “everything seems accidentally but miraculously sprinkled with beauty.”

In good weather this impulse often manifested itself in long walks between my work and my home, walks that, depending on the job or the apartment, often bloomed into two, two-and-a-half-hour journeys. Sometimes I wore headphones as I walked, but mostly I did not, preferring instead to listen to the noise of the city that surrounded me, absorbing its heat, its energy, its croon. When you are bookish and taking walks of that length, sooner or later you begin thinking about flâneurs and the storied relationship between walking and writing; Walter Benjamin, the Paris Arcades. Of course, being a woman, my relationship with public space was different—cultural depictions of the flâneur, as Lauren Elkin points out in her 2017 book Flâneuse: Women Walk the City in Paris, New York, Tokyo, Venice, and London, so often act “as if a penis were a requisite walking appendage, like a cane.”

The coronavirus put an end to my walking. Like so many others in both the U.S. and across the world, I felt enormously grateful to be able to work from home but also trapped inside of my apartment. Stuck in the same place day in and day out, fearful of the subway and not wanting to interact with too many unknown people, I started, a little pathetically, to watch walking tour videos of various cities on YouTube. Soon, the algorithm started suggesting bicycling videos of the same places to me, and I began to wonder if I could actually do it—if I could finally, successfully learn how to ride a bike (in the streets of New York, no less). It seemed as though everyone else around me was doing it, after all—an unprecedented bike shortage was already sweeping the country.

Initially, I approached this idea in the same way that I approach everything: through books. The relationship between writing and cycling isn’t as immediately obvious as that of walking and writing, nor has it been quite as celebrated. For one thing, there’s the fact that the bicycle is a physical object, and an unwieldy one at that (when not in use). It’s also a relatively new technology, its invention dating back only to the 19th century. It was literally impossible for, say, Wordsworth to cycle “as lonely as a cloud,” rather than wandering. For an outsider looking in, the contemporary world of bicycling—at least in the U.S.—can be dispiritingly sporty, fixated on gear and stats that I, for one, have neither the money nor the willpower to pay attention to.

Beauvoir herself was a committed cyclist after learning as an adult and receiving her first bicycle in 1940 at the age of 32.

There is also something to be said about how the rhythms of the human body change depending on whether it’s walking or cycling; once on a bike, there is the fusion of flesh with machine. Maybe this is why so many modernists, of every artistic stripe, were so taken with it; maybe this is why the Italian Futurists, so obsessed with the very idea of the machine, portrayed it so frequently. A Boccioni painting, “Dynamism of a Cyclist,” practically hums with energy, a two-wheeled tumbling sort of force that practically peels off the canvas.

Writing, though, is different: So much of writing relies on contemplation, the antithesis of speed. When I walk and when I write, I stop, start, get into a rhythm and then pause again. There is no gliding, no pedaling; when I walk, I’m still just a human, always.

Once you start looking, there is of course plenty of writing that involves bicycles in some way. The plot of Flann O’Brien’s The Third Policeman hinges on the bicycle, from the bicycle pump as attempted murder weapon to the bicycle-obsessed titular policeman. Nikki Giovanni’s 2009 collection Bicycles fuses the bicycle with poetry itself: “Midnight poems are bicycles / Taking us on safer journeys / Than jets.” Beckett, famously, was a cyclist, and bicycles appear often in his work. The cyclist and the flâneur are fundamentally not so different, though one moves fast and the other, slow. But what matters are the details that pass them by.

I found my bicycle on Craigslist, a cheap and solid old model that I bought from an Italian man who furrowed his brow when I hopped on it for a test and promptly fell over. “Just … just take it to the park and practice a lot,” he told me, and I did just that, first scooting along the pavement in an effort to maintain my balance and then eventually adding the movement of my legs, the force of feet against pedals. A giddiness flooded me when I first biked for 10, 15, 20 minutes at a time, and I gripped my handlebars until my knuckles turned white.

When I walk and when I write, I stop, start, get into a rhythm and then pause again. There is no gliding, no pedaling; when I walk, I’m still just a human, always.

It was pure nerves that kept me upright that first week. I’ve never felt more aware of my body than I have in a Brooklyn bike lane, with nothing but a thin white line of paint separating me from the force and rage of metal that constitutes the contemporary automobile. Much ink has been spilled concerning the paucity of the US’s biking infrastructure, but an increasing ridership across the country could change this: as the New York Times reported in October, the number of female bicyclists alone in Washington, Boston, Chicago, and Los Angeles increased by over 80 percent in August, the same month that I, too, was unsteadily beginning to cycle. That same summer, the bicycle’s historic ties to leftist political activism were visible in the bicycle marches in support of Black Lives Matter that took place around the country.

Something curious happens when you begin to spend an increasing chunk of your time navigating your city in this way. You begin to approach its ecosystem differently, realizing how fundamentally the details you notice might shift depending on what form of transport you happen to be using that day. I find it difficult to daydream on a bicycle in the way that I can daydream on a long walk, but in exchange there is an awareness of the body, and an awareness of the roads, that was previously missing. London cabbies, writes Jon Day in his wonderful book-length essay Cyclogeography: Journeys of a London Bicycle Courier, call their particular awareness of their city’s streets “the Knowledge,” and bicyclist might eventually develop a similar kind of compendium of information. Reading this, I grew hungry with jealousy: I wanted the knowledge, too.

Recently, I rode my bike into Manhattan from Brooklyn for the first time. I’m not sure why it took me so long to do so; perhaps I was worried that some kind of spell would be broken, some enchantment broached with the journey from one borough into the next. It didn’t, of course. I gulped cold air in my lungs as I slowly, clumsily climbed the Manhattan Bridge, and then gripped my handlebars, wincing as I spiraled down the bridge’s off-ramp in the descent. A twinge of giddiness, that same kind that appears whenever I successfully complete some kind of bike-related goal, fluttered in me. There is a weird poetry to this experience, this connection between the metal and the wheels and the human breath and the body. As I slid over to the road, my mind began to wander.

Rhian Sasseen lives in New York. Her work has appeared in The Baffler, BOMB, The Nation, The Paris Review Daily, The Yale Review, and more.

Barry Lopez: ‘We Don’t Need the Writer. What We Need is the Story, Because This Keeps Us Alive’ 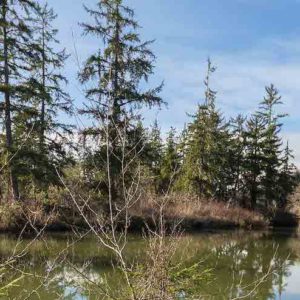 Mailboxes and Roses When I got to my mailbox at the end of my daily walk down the mail-path, there it lay, bang in the wet grass...
© LitHub
Back to top