Carys Davies Outlines the Process of Writing Her Latest Novel

What struck me most forcibly, watching events unfold at the Capitol in January, was how long it had taken us to really grasp what was coming—to fully accept that the rise of violent ethnic and religious nationalism in faraway places like India or Turkey or Myanmar had also arrived in the United States and Europe. It made me think of something George Orwell said, back in the 1940s—that “to see what is in front of one’s nose needs a constant struggle.”

For me, writing fiction is an attempt to see the world a little more clearly, and I’ve been thinking and writing about nationalism and nativism for a while now, trying to look at what’s in front of my nose through the lives of my characters.

It began, I think, with a story a friend told me when I was in India back in 2011, helping out at an orphanage in Ooty, a former British hill station in the Nilgiri mountains of Tamil Nadu. It was the story of two young boys, aged six and ten, from one of the local schools who, a few years before, had travelled east to the state of Orissa to stay with their father, an Australian missionary called Graham Staines. Together, father and sons set off in the family station wagon to join a bible camp in the jungle near the small tribal village of Manoharpur. It was a long journey and on the way they paused to rest. It was very cold, so they decided to sleep in the car, which was where they were found by a mob of around 50 Hindu nationalists who attacked them with axes and tridents and then burned them alive inside the vehicle.

For years, the horrifying fate of Staines and his boys sat somewhere in the back of my mind, sometimes flaring up in all its terrible brightness, but without my ever thinking it would one day become a spark for a novel I’d feel an urgent need to write.

I started thinking about it again in 2016—that fateful year when the UK (where I’m from) voted, on a tide of nostalgia, xenophobia, and nativism, in favour of Brexit, and when, just five months later, the US (where I was then living) voted in Donald Trump on his promise to Make America Great Again.

For me, writing fiction is an attempt to see the world a little more clearly, and I’ve been thinking and writing about nationalism and nativism for a while now.

The Staines story, I began to see—in a way I hadn’t really understood till then—was a small piece in a much wider picture: the rise of religious and ethnic nationalism in India which now seemed to have prefigured what was bubbling to the surface with a new kind of confidence across Europe and the US.

I began talking to friends in India about the rise of Prime Minister Narendra Modi’s powerful BJP party and their Hindu nationalist agenda. At my computer in the New York Public Library where I was deep into researching my first novel West, I watched video after video of violent Hindu nationalist attacks on Muslim and Christian minorities. I had an overwhelming sense of having been blind, both to what had been gathering momentum in India when I’d been there a decade ago, and to what had been simultaneously building in the West on both sides of the Atlantic.

It’s a disconcerting thing to happen to a writer, blindness. Writers, after all, are supposed to be observant, prescient even. It’s our job to understand the lives of others and to put them on the page with all the intelligence, empathy, and imagination at our disposal. Unsurprising perhaps, then, that after 2016 I became obsessed with this failure of comprehension, this neglect of the available signs, this lack of connection with lives which are different from my own—this struggle, as Orwell put it, “to see what is in front of one’s nose.”

Novels are strange beasts—when you’ve written them it’s hard to unpick exactly where they came from, but I can see that The Mission House, in its final form, absolutely emerged from the time in which I writing it, and was shaped by events unspooling beyond my study door.

I’d begun a draft of a possible story after my time in Ooty, returning to it on and off in the years leading up to 2016, without having much idea what it was about. I’d been so struck by the strangeness of being surrounded by both the modernity of India, and the relics of imperial British rule—the Botanical Gardens, the Savoy Hotel, the artificial lake, the mountain railway, the Assembly Rooms, the Christian churches. Slowly the figure of my anti-hero, Hilary Byrd, had emerged in my notebooks: a troubled, introspective fifty-something English librarian from the London suburbs who arrives in southern India at a former British hill station, hoping to pull himself out of the depression that has dogged him for most of his adult life.

It’s a disconcerting thing to happen to a writer, blindness. Writers, after all, are supposed to be observant, prescient even.

I’d been writing about how much he liked it there; how much he enjoyed the combination of the foreignness of India, and the comforting familiarity of the physical remnants of the British Raj. But what struck me now, as I reeled from the shock of the Brexit vote and Trump’s election victory, was how self-absorbed Byrd was; how blind to things outside himself; how oblivious to the growing religious tensions around him; how, in his efforts to educate himself about the town’s imperial past, he was failing to grasp the powerful new currents of contemporary Indian politics.

More and more Byrd seemed to me like a kind of blinkered Everyman, constantly failing, as I had, to recognise new realities; continually misinterpreting and misunderstanding the words and behaviour of others; perpetually looking at things without seeing them. Here was a man, I saw, who was so wrapped up in his own troubles, so hampered by his partial knowledge of the world, that he couldn’t see the storm clouds gathering over his own head.

I never know, when I begin a novel or a short story, how things will unfold, and certainly not how things will end; writing them is for me a way of worrying about things.

I never know, when I begin a novel or a short story, how things will unfold, and certainly not how things will end; writing them is for me a way of worrying about things—a way of laying them out and trying to glimpse them in new ways. As I followed Byrd on his unobservant wanderings and half-understood encounters and conversations, as I watched him blundering through his personal relationships and falling disastrously in love, I kept wondering: what will happen to him? How will it all turn out?

As I wrote, Modi’s nationalist agenda in India continued to harden; in the UK Brexit became a certainty, and meanwhile the US was moving towards what promised to be a nail-bitingly close election in November 2020.

I kept thinking of what the Irish poet W.B. Yeats wrote in his famous poem The Second Coming about the rise of fascism in Europe after the First World War—that

The best lack all conviction, while the worst
Are full of passionate intensity.

100 years on, Yeats’s words seemed to me—as 2017 turned into 2018, and as 2018 turned into 2019—to be describing precisely what we were experiencing: the “passionate intensity” of the nationalists seeming to drown out the voices of pluralism and tolerance.

I found myself wondering how an ordinary, flawed man like Hilary Byrd might behave in the midst of a historical crisis of such proportions. How, if he found himself in the crosshairs of such a moment, might he act?

Which brings me back to the business of writing being about worrying—about dwelling on things until they become a little clearer—and to how, bit by bit and page by page, I began to understand that this was the question at the heart of The Mission House:

What, once we’ve finally been forced to see what’s under our noses, will any of us actually do? 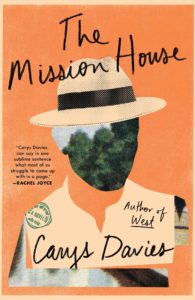 The Mission House by Carys Davies is now available for pre-order via Scribner Book Company.

Carys Davies's debut novel West was shortlisted for the Rathbones Folio Prize, runner-up for the Society of Authors' McKitterick Prize, and winner of the Wales Book of the Year for Fiction. She is also the author of two collections of short stories, Some New Ambush and The Redemption of Galen Pike, which won the 2015 Frank O'Connor International Short Story Award and the 2015 Jerwood Fiction Uncovered Prize. Her other awards include the Royal Society of Literature's V.S. Pritchett Prize, the Society of Authors' Olive Cook Short Story Award, a Northern Writers' Award, and a Cullman Fellowship at the New York Public Library. Born in Wales, she lived and worked for twelve years in New York and Chicago, and now lives in Edinburgh. The Mission House is her most recent novel. 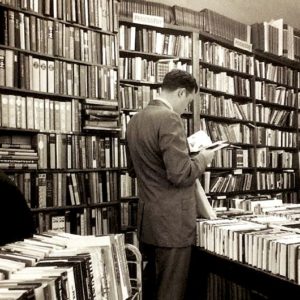 Five years ago, Lit Hub’s inaugural year, I wrote an article about the pressures of bookselling during the holidays invoking...
© LitHub
Back to top
Loading Comments...