TODAY: In 1892, The Nutcracker debuts in Saint Petersburg. (It was not considered a success.)

Our 48 favorite books of the year • Lee Gutkind on how creative nonfiction became a serious genre • An incomplete list of the great literary minds we lost in 2021 • The new Station Eleven adaptation isn’t really a pandemic story • How to experience creative awe like the Brontës • On the 1930 sound film that gave Greta Garbo a voice • Bonnie Friedman on taking clues from your manuscript • On the end times sketches of New Yorker cartoonist Edward Koren • Aysegül Savas on moving beyond the business of writing • Visiting an icon of natural winemaking in Slovenia • Rereading Rachel Carson’s sea trilogy in a time of climate crisis • Hasanthika Sirisena on “dark tourism” • Mike Gonzalez remembers Greg Tate • The best books of 2021 you may have missed • Why the lack of closure doesn’t have to be devastating •  Should “Christian fiction” join the mainstream? • On the oft-overlooked Greek writer Andreas Karkavitsas • On the radical legacy of Curtis Mayfield • Does climate fiction make a difference? • What the Stoics can teach us about death • The history of Rüstem’s Bookshop, Cyprus’s historic bookstore-café • Confronting fascism in Chile’s presidential election • Rabih Alameddine’s year in reading poetry • Why Xenophon’s Anabasis still appeals to readers after centuries • On Paul Thomas Anderson’s Licorice Pizza • Tiphanie Yanique on breaking the rules of form, starting with the Hero’s Journey

Rob Goodman on the Pursuit of Eloquence 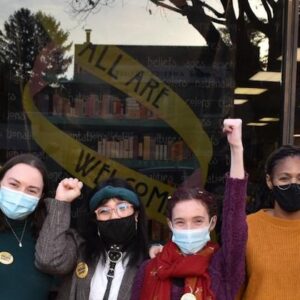 DCist reports that workers at DC’s indie bookstore Politics and Prose have decided to unionize, joining a growing list...
© LitHub
Back to top