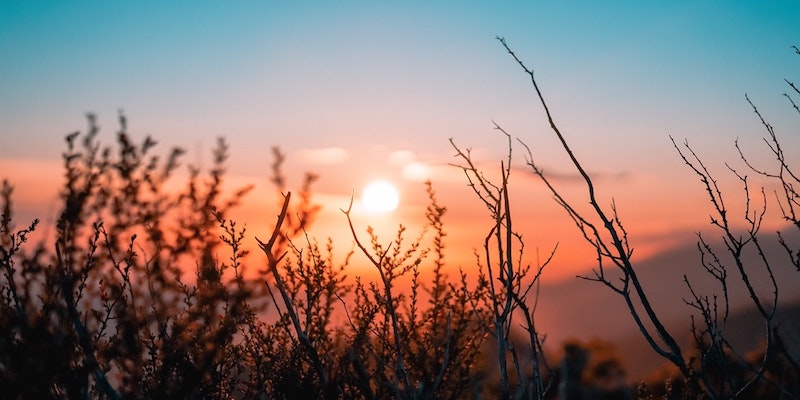 How a Sense of Awe Can Ignite Creativity

Emily Willingham on the Brontës and the Power of Reverence

Creativity has been linked to a host of favorable consequences that many of us might be interested in achieving, including enhanced sexual desirability and better physical health. That matters because creative cognition allows us to see when an idea is novel and relevant and to embrace the change it promises—in other words, to be open to new experience. People who score high on “openness” also report having good imaginations and, beyond the subjectivity of self-report, score in the high ranges on tests of creativity.

A well-functioning DMN has been linked to openness. Some research suggests that whatever openness we have tends to decline with age, in keeping with what seems to happen to the DMN as well—and in line with the observation that we become more conservative with age. Perhaps if we consciously engage our creative cognition, we can maintain our openness—and our creativity—as we get older.

In my sojourn through the research on what drives or enhances or harms creativity, the last thing I expected to come across was tuberculosis as a candidate. I have to give Arthur C. Jacobson, the fellow who proposed this association in 1908, props for achieving two of the key features of creativity: surprise and novelty. Appropriateness, not so much. He made the argument that because tuberculosis plagued many famous writers, from the Brontë sisters to Jean-Jacques Rousseau, the disease must have been the source of their creative output. His hypothesis—accompanied by a great deal of armchair diagnosis of tuberculosis itself—is obviously a failed one.

He argued “in an Emersonian spirit” that the early loss of certain “geniuses” was a welcome trade-off for the creative fruits they bestowed on the world. Charlotte Brontë, who did not in fact die of tuberculosis, as Jacobson asserted, but probably of hyperemesis gravidarum during early pregnancy, would likely have disagreed. Watching her two adult sisters die of the disease, Emily in particular angrily fighting it every step of the way, left Charlotte traumatized.

As writers, Emily and Charlotte Brontë both captured with realistic immediacy the power of the natural world: a lightning-scarred tree, a rocky moor scoured by the wind. Or consider Emily’s portrait of imagination in her poem “To Imagination,” which she likened to “a bright unsullied sky / Warm with ten thousand mingled rays / Of suns that know no winter days.” They communicated with immense skill a sense of awe and how nature and the supernatural humbled them while simultaneously filling them with gratitude. Tuberculosis had nothing to do with it.

Their authentic communication of this awe may have contributed to their creative brilliance. They are best known for their novels and poems. But when they were young, these two sisters, along with a third sister, Anne, and their brother, Branwell, spent years creating entire worlds in the minutest detail. In tiny script, they wrote in tandem, inventing characters and stories to populate and fill out the history of these realms, including the fictional kingdoms of Angria and Gondal.* The worlds were as complete as anything Tolkien ever devised, with maps and fully wrought characters, some of them based on real people.

The Brontë family, largely confined to a lonely parsonage, was stalked by tragedy. But they were surrounded by an astonishingly beautiful patchwork of heath and stone, a moody and changeable setting for expression of the internal suns that knew no winter days. Perhaps the stark contrast between this natural beauty and the darkness that shadowed their lives fed their sense of awe, sparking the creativity that made them famous despite their short time on Earth.

I’m not talking about the Brontës just because I’m a fan.** I’m talking about their communication of awe to point out that if this family, living beleaguered and tried by loss after loss, could access awe, then many of us should be able to. And awe can well be one of the energy sources for the ten thousand mingled rays of the suns of imagination in each of us.

Imaging studies show that when people experience awe, the DMN becomes more loosely connected compared to its activity during a neutral or even a positive experience. To tease this out, researchers showed study participants three types of videos: awe-eliciting, positive (funny animals), or neutral (basic, un-awe-inspiring landscapes). To measure the whole brain during “absorption,” they had the viewers focus on being fully absorbed in what they were seeing. To measure the brain during a task, the “analytical condition,” the participants were instructed to count the number of times the camera changed perspective.

At the same time, the study volunteers also reported on their feelings of awe, emotion, and arousal (in the hyped-up sense, not sexually). Absorption, or being off task, not surprisingly was associated with more activation in DMN regions. But when the video was awe-inspiring, the activation was weaker than when participants were being absorbed in positive or neutral videos. The feeling of awe hushed the DMN a tad.

Awe can well be one of the energy sources for the ten thousand mingled rays of the suns of imagination in each of us.

When the participants were on task during the awe-producing videos, they showed stronger activation in regions associated with attention compared to the effects of counting perspective changes during the neutral or positive videos. The findings suggested that the DMN remained active during awe, but less so than in everyday absorption, even as the salience network gained in strength during a feeling of awe.

The authors concluded that awe dampens our self-referential thought, in keeping with the feeling of being “humbled” that people express when they encounter something wondrous, such as a grand view of nature. The vastness of the moors that surrounded the Brontës’ home certainly could have inspired such reverence. Indeed, vastness itself has been linked to reduced self-referencing.

Experiencing the natural world can have salutary effects in all kinds of ways. These studies hint at a role for nature in our creativity. With this information in hand, you’ve got a tool in your creative cognition toolkit that may lie just beyond a closed door or window, depending on where you live.

Probably not waiting just outside your door is someone offering you psychedelics, although that also depends on where you live. These drugs may interact with facets of the creative muse. In a small study of sixteen people taking an LSD trip, their scores for trust and openness went up after their journey (although so did their blood pressure and heart rate). The participants also felt closer to other people, leading the authors to dub LSD an “empathogen.”

In a 2021 double-blind, placebo-controlled study of sixty people split into drug (psilocybin) and placebo groups, the psychedelic seemed to enhance divergent creativity, strangely on a seven-day delay, but dampen the more deliberative, convergent kind of creative thinking. These researchers also found a “disintegration” of the DMN associated with the increase in divergent creativity.

Tripping on psilocybin has been associated with higher scores on measures of “openness to experience,” and the effect was especially long-lasting if the traveler had a mystical encounter during the session. In fact, in one randomized, double-blind, placebo-controlled trial, people who reported a mystical experience while taking psilocybin were more likely to experience mood improvements that persisted weeks later, suggesting some dimming of the DMN’s insistent “me-me-me” drumbeat in depression.

In keeping with research showing that engaging our creativity triggers two or three networks that normally operate at odds with each other, findings with classic psychedelics show that the executive network and the DMN get into sync under the influence of these drugs as well. Perhaps this syncing contributes to the hallucinatory confusion about what’s real and what’s all in the brain.

In an echo of the precariousness of the brain’s rhythmic tipping point, the authors of one review say that their findings may point to “increased instability in psychedelic states.” Another group of authors found that alpha waves, which are supposed to keep attention directed toward important things and to filter out random noise, decrease in power under the influence of LSD. No more blocking of unimportant information.

Before Impressionism existed, no one knew what it was. When it was introduced, it was novel. That made it creative. One of the things the Impressionists did was to “liquefy the solids and corrode the angles.” It’s difficult to read this allusion to both state transition and altered angles without thinking about the brain’s hypothesized tipping points and how they relate to creativity. Impressionists struck the world with their reshaping of visual reality; psychedelics similarly alter our sense of reality. Many of us, in the absence of a Brontë-like power to summon experiences and entire worlds from imagination alone, need something to nudge us over the creative edge.

There’s more going on with these drugs than some hypothesized or symbolic tipping point. In the very real but invisible molecular world, as we saw in our chapter on mood cognition, ketamine and the classic psychedelics show a propensity to set the stage for neuronal excitation thanks to the effect of glutamate. The excitement isn’t universal: one study showed increased glutamate in the prefrontal cortex in people taking psilocybin, but a decrease in the hippocampus. That scenario suggests some effect on memory delivery and, these authors concluded, a stepping away from a focus on the self.

Perhaps this surge, even if it occurs locally, sets off a cascade of reactions until it encompasses the whole brain, like a series of small earthquakes initiating a big one. Arguing against that hypothesis are findings that brain waves in the low frequencies show weakening under the influence of psychedelics, with a possible trend to more local communication. The conditions that can tilt a brain past the tipping point, if such a state exists, are complex, and many pieces of this hypothesized puzzle remain to be uncovered.

No mind-altering substances other than the psychedelics achieve this mix of released ego, mystical experience, openness, and divergent thinking. You might think alcohol could unleash the ingenuity fairy, but randomized, placebo-controlled studies*** don’t find much effect. After one drink, study participants may get more creative about solving problems, but beyond that they just get impaired. There may be veritas in vino or beer, but there isn’t much invention.

* The invention of these kingdoms was a breakaway rebellion on the part of Emily and Anne, who became separatists from the worlds established by their older siblings, Charlotte and Branwell.

*** There is nothing under the sun that someone hasn’t done a study on. 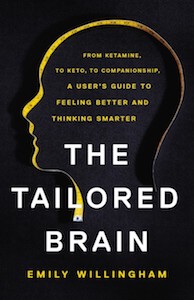 Excerpted from The Tailored Brain: From Ketamine, to Keto, to Companionship, A User’s Guide to Feeling Better and Thinking Smarter by Emily Willingham. Copyright © 2021. Available from Basic Books, an imprint of Hachette Book Group, Inc.

Emily Willingham, Ph.D., is a science writer and author of Phallacy: Life Lessons from the Animal Penis, to be published in September 2020 by Avery, an imprint of Penguin Publishing Group.

“Books From My Own Community.” A Farewell from Reading Women 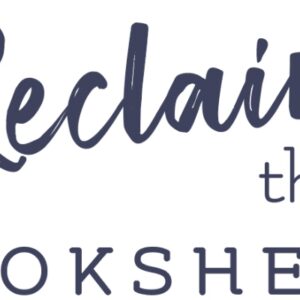 “Books From My Own Community.” A Farewell from Reading Women

In Reading Women’s final episode, Kendra and a very special guest reminisce about episodes across Reading Women’s six seasons. From...
© LitHub
Back to top
Loading Comments...