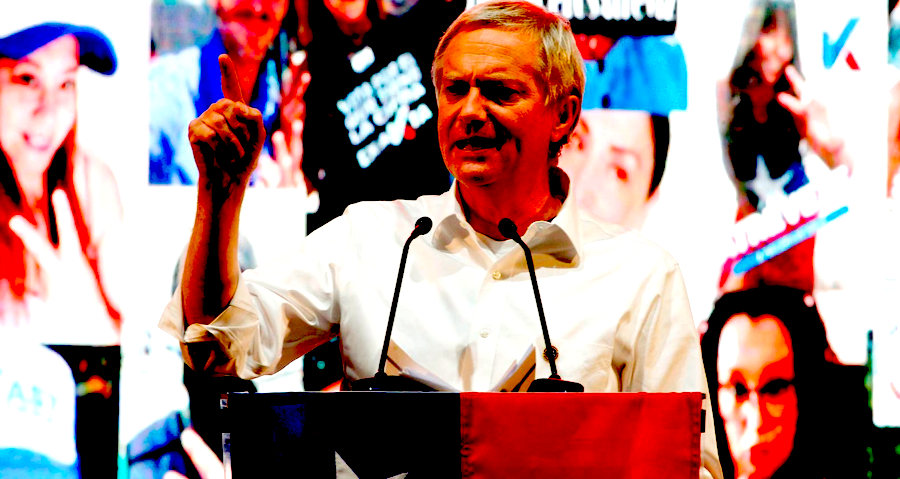 By Mónica-Ramón Ríos and Carlos Labbé

​Encountering the cyclical pendulum between authoritarianism and resistance, any writer who reads the history of Chile faces an ethical imperative to use their voice to counter the direct violence of fascism. The Chilean writer is also moved to speak out about the aggressions of social-democratic capitalism. Such is our debt to the literary history that spans from La Lira Popular to Pedro Lemebel, from Rosario Orrego to Diamela Eltit and Roberto Bolaño, from Marta Brunet to Manuel Rojas and José Donoso, among many others.

At the end of November—just three weeks before this Sunday’s run-off vote between two presidential contenders in Chile—the ultra right-wing candidate José Antonio Kast traveled to Washington DC. Many in Chile wondered why Kast would leave his voters in the midst of a highly disputed election in which his opponent, Gabriel Boric, had amassed support from some of the most important social forces in Chile. Kast’s opponent, a 35-year-old social democrat, has been backed by several former candidates and many grassroots movements who fear a government led by the founder of the ultra conservative Chilean Republican Party. Some speculated the goal of Kast’s visit was to garner the support of Franco Parisi, who surprised voters by coming third in the initial vote with a campaign done entirely online from his home in Alabama. But the right-wing turn in Latin America and the need for the socially-conservative sectors to quash the demands that arose from the 2019 popular revolt, provides another context for interpreting these sudden travel plans.

Two years ago, an anti-capitalist, feminist, Indigenous, anti-extractive popular uprising battled the idea that Chile was a bastion of Latin American economic growth, as it had been since Pinochet’s dictatorship (which was legalized by a 1980 Constitution written by the acolytes of neoliberal guru Milton Friedman). In a referendum in 2020, a vast majority of Chilean voters approved the creation of a Constitutional Convention, and, in 2021, they elected representatives with the hope of writing a legislative frame that would express the diversity of demands emanating from the social movements. Right wing politicians—Kast vocal among them—opposed the Constitutional Convention.

Since making his way from the margins of the political right, as a representative in congress who defended retrograde positions, to the candidate supported by most of the right-leaning parties, Kast has become a real threat to the liberties of women, local LGBTQI+ communities, retirees, Indigenous rights advocates, and the lower and middle classes, while also proposing an economic revolution that would take taxes for large companies to historic lows. His campaign, with the aid of media outlets, has painted his opponent’s economic program as following the Communist Party’s platform, renovating an old, but well-known framework of confrontation. The disputed factors lie heavily on the role that foreign companies might have in the benefits of the local markets, among other internal matters, such as retirement funds, health, and education.

Kast’s campaign reported that the candidate of the Christian Social Front traveled to the United Stated to meet with potential investors, businesspeople, agents of the tech world, key figures of the US Republican Party such as Marco Rubio, and representatives of the think tank Diálogos Latinoamericanos. Such meetings also included the representative of the Council of the Americas, the organization founded by the late David Rockefeller, and whose board members are CEOs of major transnational companies. The ties between the CoA and federal and private organizations that intervene in Latin American politics, to pave the way to political and economic reforms, are long and well-known. This includes influencing local and global cultural markets that would whitewash their interest in facilitating profitable investment in the southern hemisphere; examples can be traced back to the Museum of Modern Art and the Americas Society, among other grants and fellowship programs. Such forms of control and value-creation of cultural production have been denounced by progressive forces in Chile who point out how they are connected to a cheap, easy, and disastrous extractive economy, from mining to the security industry.

As the final election approaches on Sunday, writers from around the world are responding with urgency to the ethical imperative to defeat fascism.

The coalition that brought success to Kast’s campaign is the Christian Social Front, which includes the party founded by Kast, Partido Republicano (Republican Party, in Spanish), and Conservative Christian Party. The latter gathers evangelical and protestant forces gaining political traction in the past years in Latin America. There are several press reports about the organizations that link Brazil’s Jair Bolsonaro to Kast’s campaign. Although analysts in Chile have remarked that some of the conversations in the United States were meant to secure a deal through which to limit the radicalization of the right, the fact is that in Chile the forces that support Kast are radically conservative.

This was made evident by the problem posed by the elected representative member of the Partido Republicano Johannes Kaiser, who appeared on television making deeply misogynist remarks. These included doubts that giving the vote to women had been wise (implying the possibility of taking it away) and maintaining that rape is a blessing to some females. Although Kaiser was immediately ousted from Kast’s party, the  very fact he got elected raises concerns about the people involved in this coalition and how they are selected. We can also add the recent persecution of women and gender non-conforming academics and health providers earlier this year by elected representatives who have aligned with Kast.

More recently, materials appeared in feminist publications denouncing two members of Kast’s coalition for using extreme conversion therapy tactics to target the “demons” of same-sex desire in vulnerable patients, referring to the practices as “exorcisms.” This adds to the opinions voiced openly by the ultra-right wing candidate in relation to migration (the building of trenches at the border, for example), his opposition to same-sex marriage, the radical opposition to diverse gender and sexual identities, and the elimination of the Ministerio de la Mujer, responsible for laws and initiatives to advance the place of women in society. And that is a short list.

In fact, part of what José Antonio Kast wanted to achieve in this sudden trip to the United States is to project an image, both nationally and internationally, that distances the potential president from his clownishly extreme conservatism—where in the world might such an operation be possible, other than in the US? Only in the context of contemporary American politics might he appear as the male savior who can “Make Chile Great Again,” thus restoring the southern country’s international role in the world economy.

The truth is that Gabriel Boric, Kast’s 35-year-old opponent, who represents a center-left coalition, is far from perfect. Boric came into the public eye as a student leader during the general strikes of 2011 protesting then president, Sebastián Piñera, the first government since the end of the dictatorship that openly supported Pinochet’s legacy. Elected as a representative a few years later, Boric presented himself as a left-leaning radical, creating a party that negotiated with other new parties led by a younger generation of politicians and lobbyists tied to the social democrat political alliance Concertación, either by family, friendship, wealth, or mentorship.

In 2019, after Boric appeared in various spreads supporting the unexpected and sweeping popular revolt, he was part of a negotiation behind closed doors that led to the so-called “agreement for peace.” This agreement had the ambiguous goal to end the protests, create a Constitutional Convention, and thus open the possibility to criminalize demonstrators. This meant that Sebastián Piñera’s second government would be saved, despite the human rights abuses he enabled during the revolt. Such an agreement is today regarded as treasonous to the people, and Boric was popularly dubbed “the traitor.”

Despite all this, center-left forces immediately aligned to support Boric after the first round of election results came through on Sunday, November 21. In the week that started on November 22, many of the popular assemblies that had been put on pause during the pandemic were reignited. They aligned under one goal: defeat fascism. Feminist assemblies sprung up everywhere. One of the authors of this article attended three that week, right before feminist groups across the country called for a general protest on Thursday. The discussions were heated: how would we support Boric, a candidate who betrayed a popular revolt that was feminist in spirit? The following week, congress discussed legislation on abortion, and because of absentee votes, among which was Boric’s, the law did not pass. Betrayal. But then, the alternative is much worse. In fact, when the communist representative Carmen Hertz called out Kast for his fascism, creating a turmoil in the political arena, she was only voicing the words of the people.

Under such circumstances, it became necessary to express support for Boric and to organize grassroots campaigning in order to stop fascism. The literary world reacted immediately; individual writers positioned themselves in social media, and many made explicit calls to unite against fascism. Professional guilds, cultural institutions, various groups organized to get votes for Boric. Some, like Autoras Chilenas (Auch+) explicitly incorporated Boric’s campaign logo into their communications. Personal messages to writers invited them to sign, not a letter, but the very clear and concise message: “Escritores por Boric” (Writers for Boric), an initiative that ended up including 501 signatures united against totalitarianism, particularly after dubious literary personalities such as the Peruvian Mario Vargas Llosa expressed support for Kast. When accepting the FIL Literary Prize in Guadalajara, Diamela Eltit, maybe the most prominent Chilean writer today, made an explicit call to vote for Boric, thus also calling attention to the dangerous spread of fascism in Latin America.

As the final election approaches on Sunday, writers from around the world are responding with urgency to the ethical imperative to defeat fascism. Hopefully, when Boric earns the seat of President of Chile, and the Constitutional Convention fulfills its mission, the literary community will join the voices of other feminists, cultural workers, individuals, and organizations to continue to reveal the aggressions of democratic capitalism, as they did in the revolts of 2019. As writers, we also have the potential to imagine a third space beyond the endless pendulum swing between authoritarianism and liberatory reaction, a space defined by dignity, justice, and collective self-determination.

Mónica-Ramón Ríos is the author of Autos que se queman (2021), translated as Cars On Fire (stories, Open Letter, 2020), and the novels Segundos (2010) and Alias el Rucio / Alias el Rocío (2014-2015). The essay Látigo versus luma is upcoming in 2022. They were awarded with the Juegos Literarios de Santiago Prize 2021. They teach feminism, critical theory, Latin American literature, culture, and writing at Pratt Institute. Ríos is also one of the creators of Sangría Editora, a publishing collective based in Santiago and New York.   Carlos Labbé is the author of nine novels, most recently Viaje a Partagua (2021). His Spiritual Choreographies, Loquela, and Navidad & Matanza are available in English translation at Open Letter. The Murmuration is upcoming in the same house in 2022. He has published two short-story collections, a book of essays, and scattered poems. Also a screenwriter and musician, he has put out five solo albums in the streaming services. With a master’s degree in Latin American literature, Labbé works as a copyeditor and has been part of the publishing collective Sangría for twelve years.

Mel Brooks on the Making of Spaceballs 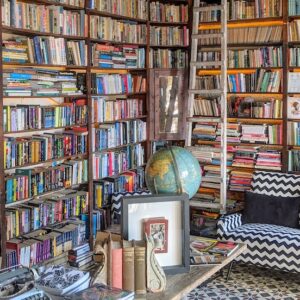 In Bitter Lemons, Lawrence Durrell’s 1957 memoir about Cyprus, the British novelist and philhellene lamented that Nicosia,...
© LitHub
Back to top