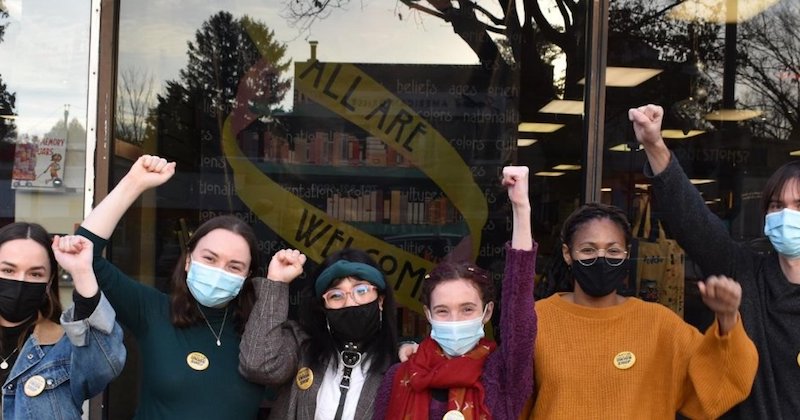 DCist reports that workers at DC’s indie bookstore Politics and Prose have decided to unionize, joining a growing list of bookstores (and other workplaces) that have unionized this year. If they do unionize, they’ll become the only bookstore in DC with a unionized workforce. But Politics and Prose owners Bradley Graham and Lissa Muscatine declined to recognize the union—instead choosing to hire Jones Day, a law firm known for its union-busting tactics (and its ties to the Trump administration’s efforts to overturn the election results).

According to a joint statement from the workers, they’re unionizing for several reasons: to secure a living wage (in one of the most expensive cities in the country), secure pay transparency and a clear and standardized pay scale, and solve chronic understaffing and scheduling issues amid a deadly pandemic. “Politics & Prose has long been considered a progressive and inclusive bookstore,” read the workers’ statement in part, “and our decision to unionize is a natural next step in the company’s ongoing effort to put our shared values into practice. We’re doing this for each other—for all of us to be respected, for all of us to be valued, for all of us to be in a safe environment.”

According to DCist, two employees who are part of the union’s organizing committee, told Politics and Prose co-owner Bradley Graham of workers’ intent to unionize last Wednesday. According to Ayesha Shibli, bookseller and shift supervisor, she and X told Graham a “supermajority’ of full- and part-time employees across departments and Politics and Prose’s three locations decided to form a union; they offered him the cards employees signed to authorize a union, signed by over 70 percent of Politics and Prose’s union-eligible workforce, but Graham wouldn’t take them.

That Friday, Graham announced in an email to staff that he and Muscatine would not voluntarily recognize the union. “We’ve always valued the opportunity to work directly and collaboratively with you to solve problems and address your needs, from the professional to the personal,” wrote Graham. “We believe a union at P&P would make our workplace more transactional, less personal, and less flexible.” Graham wrote that accepting the union authorization cards workers signed instead of waiting for a full vote through the National Labor Relations Board would “disenfranchise those employees who didn’t sign cards, who would still like more information about the pros and cons of a union, or who may have changed their minds.”

“It felt like [Graham] was saying we had pressured our staff to join the union when I feel very strongly that it’s going to be pressure from [Graham and Muscatine] not to join,” Sarah Valencia, a bookseller and shift supervisor, told DCist.

Politics and Prose employees filed an election petition with the NLRB. Then, this Monday, Graham and Muscatine hired Jones Day. “When a union files a petition, the NLRB process moves swiftly,” Graham told DCist via email. “We had worked with Jones Day before on a number of employment and labor matters. They knew us, and we knew them. They were available right away. That’s why we retained them.”

Wrote the Politics and Prose union in a statement, “These are not the actions we have come to expect from Politics and Prose, nor do they reflect the values of our mission statement. However, we are undeterred. We are forming our union. We are deeply committee to our workplace and we know unionizing is the best way to live out our shared values, both now and into the future. We continue to call on management to recognize our union and begin negotiating our first contract.”