On the History of an Important Cultural Center

In Bitter Lemons, Lawrence Durrell’s 1957 memoir about Cyprus, the British novelist and philhellene lamented that Nicosia, the island’s capital, lacked a “decent bookshop.”

He must have overlooked Rüstem Kitabevi.

Rüstem’s Bookshop has been a leading bookseller on Cyprus since 1937, when the island was a part of the British Empire. More than eight decades later, the bookstore remains an important cultural center in the heart of Nicosia, the last divided capital in Europe.

Enter the store from Kyrenia Street in North Nicosia, and impressive stacks tower over the visitor, a space evocative of an elaborate study (ladders and globes et al.) belonging to an eccentric adventurer in a Jules Verne novel. Vintage books in Turkish and English—from The Concise Oxford Turkish Dictionary to Ian Fleming’s Thunderball—line the shelves. Pop open an old tome such as Rupert Gunnis’ travel guide Historic Cyprus, and you’ll find that this particular edition was published by this bookshop about fifty years ago. If you’re looking for a gift, you might pick up a Rüstem-brand 50-piece puzzle of the Cyprus map (more serious puzzlegoers might opt for the 500-piece option).

But before you make a purchase, the smell of coffee (from Australian brand Gloria Jean’s) lures you to the building’s courtyard, an oasis where you can sit amidst the shade of trees and bougainvillea against the backdrop of an eclectic globalized playlist featuring Radiohead, Broken Bells, and once in a while, Artie Shaw’s jazz classic, “Nightmare.” 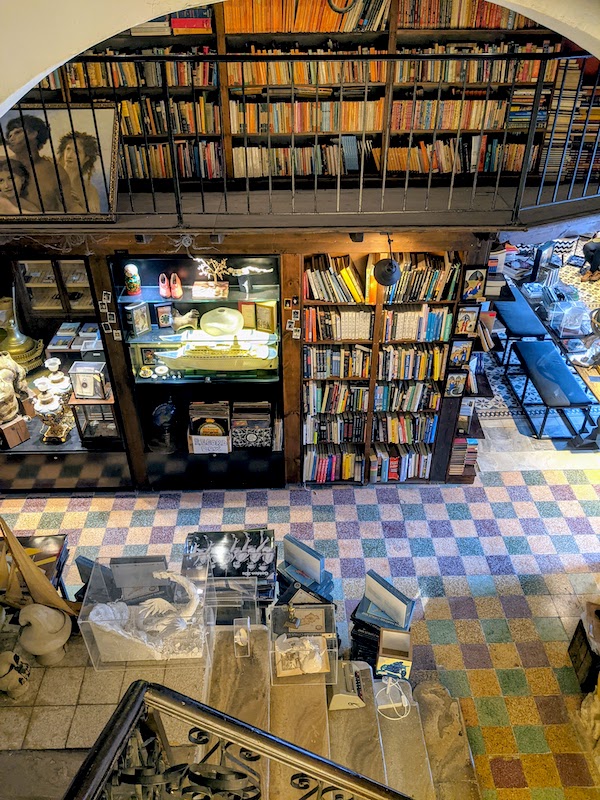 Rüstem is more than a bookstore-café. Adjacent to the courtyard is a venue for readings, lectures, and an antique market held on the first Saturday of every month. Double back inside and you’ll also discover an art gallery offering a rotating slate of exhibits. Head upstairs, and you’ll find a charming restaurant, where you might take in an impressive homestyle lunch—perhaps salad, lentils, and rice, followed by a slice of chocolate cake and of course yet another “Cyprus” coffee (elsewhere known as Turkish or Greek coffee), the grinds at the bottom sticking to your teeth.

This building, constructed in the late 19th century around the time the Ottomans handed over the island to the British Empire, has been the home of the Rüstem family since 1917. In 1938, nineteen-year-old Mustafa Kemal Rüstem founded the bookshop, which soon became a favorite meeting place of Cypriot intellectuals and the British colonial elite. A serious man who always wore a suit, Kemal Rüstem started by catering to visitors and the British clientele—in those early days, his shop sold novels, guides, maps, and postcards.

“These kinds of things are so rare here.”

In 1957, Rüstem Kitabevi became a publisher under the imprint K. Rüstem & Bro., printing the first book with color images on the island. At that time, Cyprus was on the cusp of great change, and Rüstem—like the rest of Cyprus—had to adapt to the times.

In 1960, after a guerilla campaign against the British by Greek Cypriot militants who desired union with Greece, the island was granted its independence and became the Republic of Cyprus. Not long after, tensions between the island’s Greek Cypriot majority and the Turkish Cypriot minority escalated into violence. In 1963, British forces established a “Green Line” that divided the island (and the capital city of Nicosia) into two sections—the Greek Cypriots mostly residing in the southern two-thirds of the island, with the Turkish Cypriot community in the northern third. That line became quasi-permanent in 1974, after a coup in the Republic of Cyprus led to a Turkish military invasion of the northern third of the island. Since then, the northern part of Cyprus has been considered “occupied territory” by the international community. The so-called de facto state of “Turkish Republic of Northern Cyprus” continues to go unrecognized by all other nations but Turkey.

As a result, for a generation Cypriots on both sides of the line could not pass freely across the United Nations-managed buffer zone; in Nicosia, various downtown streets suddenly end in barbed-wire barricades reminiscent of postwar Berlin. For decades, Rüstem Kitabevi was cut off from the rest of Cyprus, though the bookstore retained some vital links to the outside world. A 1980 Library of Congress acquisitions report stated that Rüstem was supplying Turkish Cypriot books to the Washington repository.

In the meantime, Rüstem started publishing Turkish Cypriot political books and selling textbooks to local schools. And in 1997, Ali Rüstem, the only child of Kemal, took over the bookshop from his father. 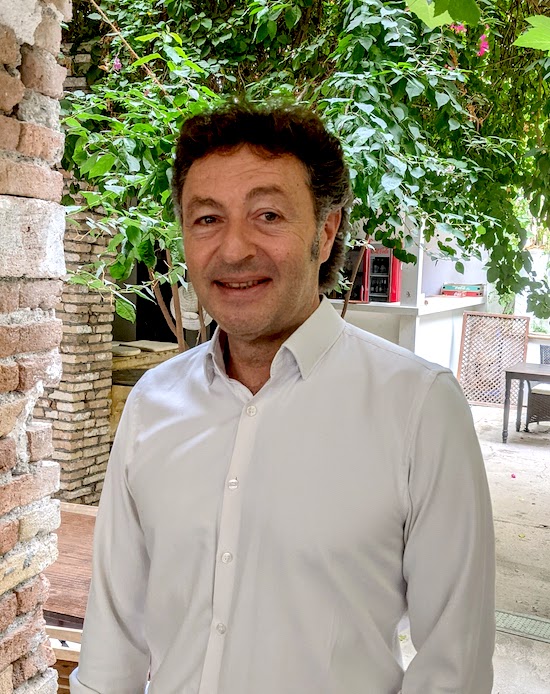 Ali Rüstem, seen in the courtyard. Photo by Harrison Blackman

“I’m the second generation; I should have been the third generation,” Ali told me over a Cyprus coffee in the courtyard, explaining that his father married and raised him late in life.

Since taking over, Ali and his wife Akile have sought to create a sustainable configuration for Rüstem, one that balances the role of legacy bookstore with being a cultural center for the local community. The café, restaurant, gallery, publications, and event venue are all ways in which Rüstem Kitabevi argues for its continued existence, though business remains tough, especially with the pandemic. Most tourists take a photo for Instagram and leave; meanwhile, selling coffee in a city of coffeeshops isn’t necessarily the best revenue stream.

So the Rüstems decided to evolve. Akile started the restaurant in 2011 while she raised two young children. “I can tell you honestly, the first three years, I don’t know how they passed,” she said. “Then the balance came.”

Akile is not a chef by training—she studied international relations at the Eastern Mediterranean University in Famagusta. When it came time for her to decide what to cook, she decided to craft “four main dishes, but different every day.” In this position, Akile embraces the role of culinary “magician.” 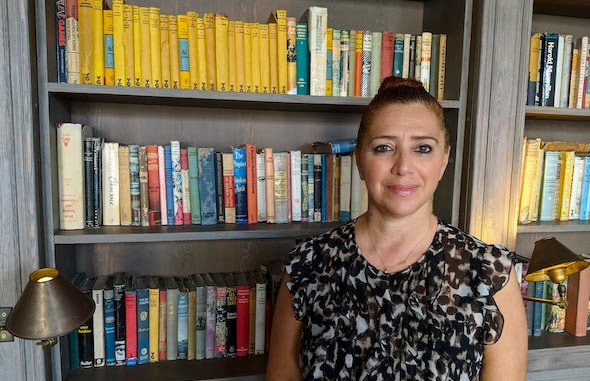 Akile Rüstem appears at the bookshop. Photo by Harrison Blackman

Rüstem Kitabevi received a jolt in 2003, when Greek Cypriots and Turkish Cypriots were permitted to travel across the Green Line for the first time in decades. In 2008, a checkpoint on Nicosia’s central avenue of Ledra Street opened, providing a vital artery between the two communities in the heart of the historic urban core.

“This is like having an airport in the middle of the city,” Ali Rüstem said, explaining that the opening of the Ledra Street crossing in 2008 brought in an estimated one million new visitors to North Nicosia each year. 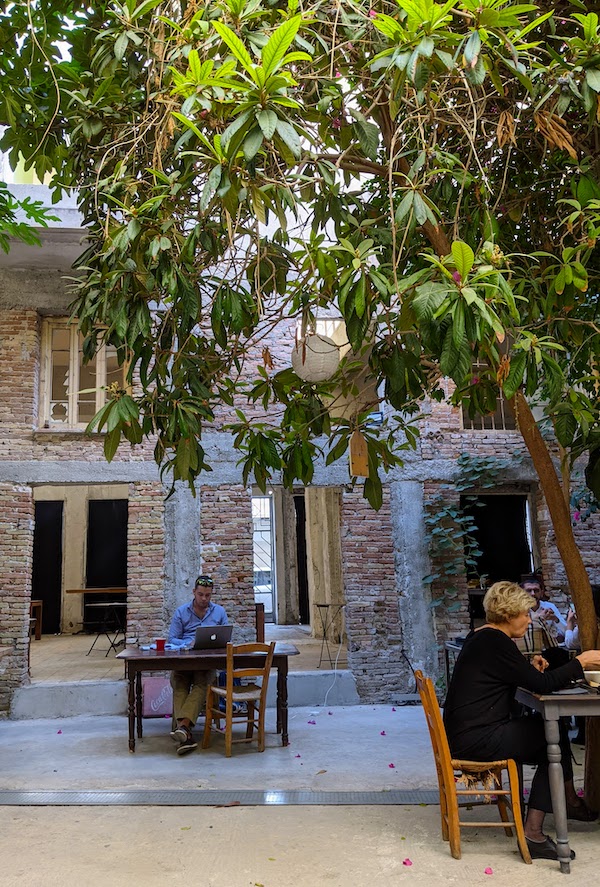 The courtyard space of Rüstem’s Bookshop. Photo by Harrison Blackman

Rüstem’s modern experimentation as a laboratory for local culture owes much of its design to Halil Duranay, often found working at a table in the vacant building adjacent to Rüstem’s main courtyard. A sociology of cinema scholar from Istanbul, Duranay is the bookshop’s art director, but he prefers the title “mukhtar,” which means the “head of a neighborhood” in the Turkish and Arab world. He came to Rüstem in an episode that seemed like fate.

In 2013, Duranay was walking through North Nicosia with his wife, looking for a potential location to open an antique store. As they passed by Rüstem Kitabevi, Duranay explained to her that the bookstore was an important place for him. “I told her I believed that one day I was going to come and become part of this building,” Duranay said. Two years later, Ali Rüstem asked him if he wanted to manage the new exhibition space for the bookshop. “[Ali] buried me here,” Duranay said, joking. “I’ve become a part of this place, but I felt it before our agreement. A self-fulfilling prophecy? I have no idea.”

In 2018, Ali Rüstem planned to create an exhibition space for his late father’s collection of Cypriot antiquities from the Neolithic to the Byzantine era, but budget restrictions and archaeological regulations forced them to modify the plan. Since 2019, Duranay has supervised 28 temporary exhibitions in the gallery. Recently they put on an exhibit about Olga Rauf (1893-1987), popularly known as “Madame Yenge,” an important but nearly forgotten Russian-born Cypriot painter of the 20th century.

Özlem Ünsal, a descendant of Rauf who conducted the research for the exhibition, recounted the experience of witnessing a group of junior high school arts students visiting the Rüstem gallery and engaging with the story of the artist. “I said, that’s it,” Ünsal said. “Just this moment is worth all the trouble—because these kinds of things are so rare here.” 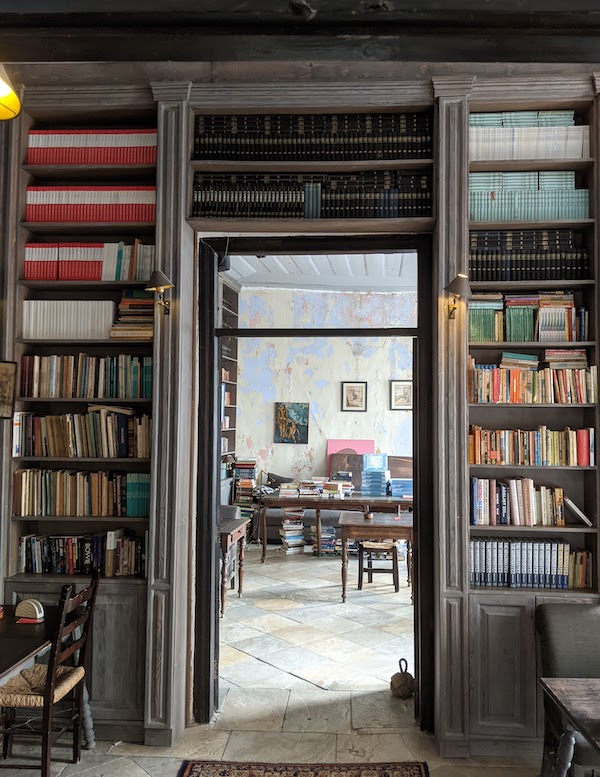 The restaurant space of Rüstem’s Bookshop. Photo by Harrison Blackman

Though Rüstem Kitabevi manages Facebook and Instagram accounts, as of now it still does not operate an online store, a component Ali realizes the bookshop must introduce soon. Though Amazon doesn’t really have a presence on Cyprus, the island an analogue world where phone calls and face-to-face interactions rule the day, Cypriots are starting to shop online more frequently. 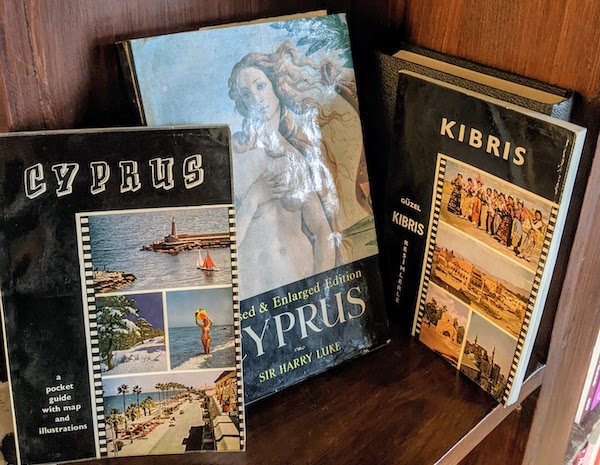 For the regulars and tourists who continue to use the space, Rüstem is a jewel of Nicosia, one that Ali Rüstem and his team are eager to preserve despite the odds.

“There is a memory pattern of a bookshop,” Ali Rüstem said. “Maybe we can use the same material to make a porous pattern which is flexible and find more bonds with the community—like an unseen spiderweb. This place has to have citizens who can hold on to it.”

Harrison Blackman is a Fulbright scholar, a writer of fiction and nonfiction, and a TV and film project consultant.

How to Make a Better World Without Centering Yourself: A Conversation with Alex McElroy 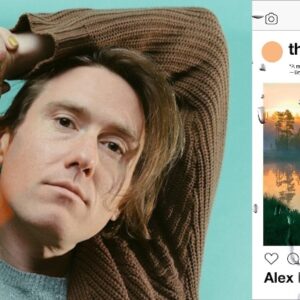 How to Make a Better World Without Centering Yourself: A Conversation with Alex McElroy This week on The Maris Review, Alex McElroy joins Maris Kreizman to discuss their novel, The Atmospherians, out now from...
© LitHub
Back to top
Loading Comments...