By Lit Hub Daily
TODAY: In 1922, historian and author Howard Zinn is born.

All this week we’ve been highlighting our most anticipated books on a variety of subjects, from politics and social science to memoir and essay collections, history and biography, and finally tech and science • Please teach more living poets: Nick Ripatrazone on the benefits of studying “breathing, human artists” • Gregory Pardlo writes a letter to Yusef Komunyakaa • Jay Parini on the golden age of reinventing real life • In which Nicola Waldron wonders if writing can be a kink • Amitav Ghosh and Chitra Banerjee Divakaruni on Indian epics in modern novels • At the birth of surrealism in Montparnasse, 1913 • On translating a childhood between five countries • Lessons from Nabokov: Rajia Hassib on finding freedom in a foreign language • Martha C. Nussbaum: Is there such a thing as an ethics of cosmopolitanism? • Kanako Nishi on Jun’ichiro Tanizaki’s subversive attention to detail in an age of endless scrolling • Walter Mosley talks to legendary filmmaker Walter Bernstein • From literary ambition to awkward sensitivity, Hans Christian Andersen, original softboi, had it all • Wittgenstein, making sense of nonsense, from Bertrand Russell to the existentialists • The political chaos and unexpected activism of the post-Civil War era • On Victor Hugo’s posthumous career as a religious prophet • Sara Martin on reciting Paul Celan to expedite intimacy • Lara Vapnyar on the book that made her weep for hours • J.M.G. Le Clézio on the expansive, immersive quality of great poetry • The feints and jabs of Polari, Britain’s gay slang • Susan Steinberg on the value of writing an ugly draft • What does a war correspondent look like? Zara Meerza on conflict journalism by Arab women • On overtourism and the joy of unsung places • Jenny Zhang on her complicated feelings about Little Women’s heroine

13 books that will actually make you laugh out loud: from A Confederacy of Dunces to The Sellout • What We Talk About When We Talk About Books author Leah Price recommends five great books about books • 14 rapid-fire book recs from rapper, singer, and writer, Dessa • A blistering Brexit novel, a instruction manual for antiracism, and an exposé of abuses at sea all feature among the Best Reviewed Books of the Week

Nile Cappello on the Bloody Benders, America’s first family of serial killers • J. Kingston Pierce on 1970s crime fiction and the remarkable rise of regional noir • Michele Campbell on eight books about vacations that don’t exactly turn out to be relaxing • Hank Phillippi Ryan cross-examines the most suspenseful jury verdicts in fiction and film • Summer’s not over yet! Grab one of these riveting thrillers and hit the beach • Mary Anna Evans digs up some explanations for our fascination with archaeological mysteries • Lauren North on seven psychological thrillers that explore the inner workings of the human mind • August’s best international crime fiction • Olivia Rutigliano on how the new film Ready or Not marries traditional mystery tropes to feminist horror • Rachel Monroe talks murder, miniatures, and true crime fandom

Pirates, poets, and pop quizzes: the most-read stories of the week at LitHub.com. 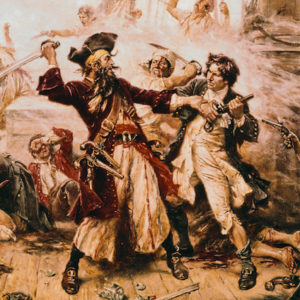 Pirates, poets, and pop quizzes: the most-read stories of the week at LitHub.com.

Here at literary website and widget factory Lit Hub dot com, I keep an hourly eye on traffic because, uh, traffic is also...
© LitHub
Back to top