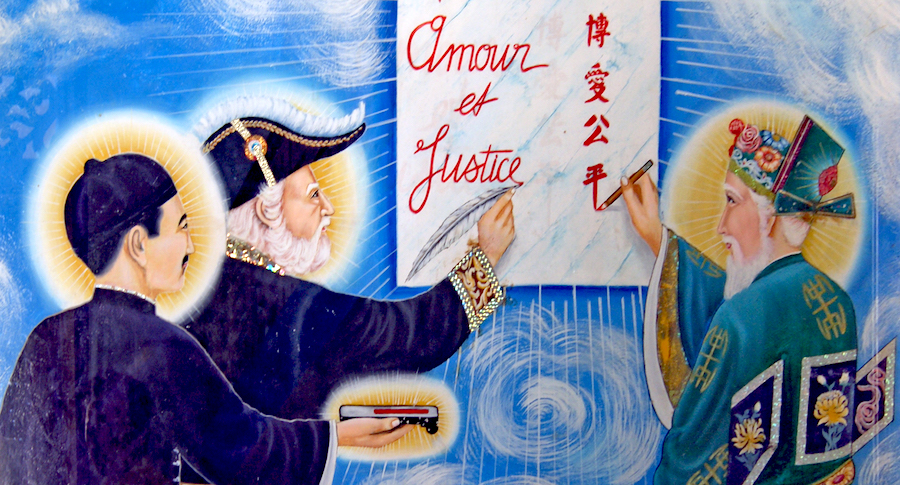 On Victor Hugo’s Posthumous Career as a Religious Prophet

Ask a French reader about the legacy of Victor Hugo and you might get an answer strikingly different from an American rundown of works that have been adapted for Broadway and Disney. You might hear instead about Les Contemplations, a well-respected, well-loved collection of poems he wrote for his favorite daughter, Léopoldine, mostly after her accidental death by drowning. Ask someone in Southern Vietnam, and you might hear about Les Châtiments, a poetry volume about the injustices of Louis-Napoleon and the plight of the poor, one that helped inspire Vietnamese intellectuals of the 20th century to action against their French colonizers.

But if you ask an adherent of the Vietnamese religion Cao Dai, you may get a different answer still—that Hugo’s legacy lies in the text of the séances he used to contact Léopoldine, and the prophecies that came to him there about a great new pan-religious faith that was to emerge in Asia in the coming century.

In Garden Grove, California stands a scaled-down replica of the great temple of Tay Ninh, Vietnam. The worshipers, dressed in white robes, are mostly immigrants from Southern Vietnam, but the motifs of the building come from an intricate mix of eastern and western traditions. Inside, the ceiling is painted with blue clouds and a hall of candy pink columns wrapped with dragons leads to an altar featuring figures of the “three teachings”—Buddha, Confucius and Lao Tzu. Jesus is pictured too, a familiar Western interloper, but Victor Hugo is especially jarring, decked out in the costume of the Académie française.

Hugo is not pictured among the spiritual leaders, but instead appears in a mural at the building’s entrance, writing the words “Dieu et Humanite, Amour et Justice” on a celestial tablet beside Chinese political leader Sun Yat-Sen and Vietnamese poet Trang Trinh. This image is so surprising that it is often mischaracterized: Hugo was not a god, nor was he worshipped, but his place in the religion is neither random or naive. When Hugo was inducted into the nascent religion of Cao Dai in the 1920s he was seen as a prophet, and his role has shifted according to the needs of believers ever since.

But how did the author insinuate himself into a faith that was not formed until 42 years after his death?

In part because of the humanistic ideals he stood for in his writing and in part because he accidentally made himself a kindred spirit to the needs and searchings of youth living under colonial regime. In different centuries, both Hugo and the Cao Dai founders used séance not for purely symbolic reasons, but as a practical tool for affirming their beliefs and identities.

Hugo’s unexpected, posthumous ascendance in the Cao Dai religion was born from the best themes of his work: the dissent in his political writing, the love in his poems, and the humanism in his fiction.

In 1853, during a period of political exile on the island of Jersey, and shortly after the death of his daughter Léopoldine, Victor Hugo turned to séances to relieve both grief and the boredom that came from isolation from his Parisian milieu. Although the séances themselves were painstakingly interpreted by counting taps that corresponded to the sequence of the alphabet, Hugo recorded loose transcripts after the fact, from memory. He contacted Léopoldine first but also used “table turning” to converse with historical figures from Hannibal to Galileo. But his most pressing concern was to contact literary giants and to solicit advice about the place of a writer in the afterlife.

His opener to Shakespeare was about Cervantes, who died on the same day as him—did they meet and what did they discuss en route to heaven? Shakespeare has a lot to say about time in heaven working differently and politely dodges the question. But Hugo’s more urgent line of questioning has to do with posterity, about the audience a writer can expect after death, on earth and in heaven. Here is where Hugo gets his takeaway: it is not Shakespeare, but the spirit of Death himself who tells him to hold back his works with the expectation that they be released along a staggered timeline, once every ten years after his death. Hugo followed the advice and it kept him in the publishing game from his death in 1885 until 1951, another 65 years.

Just like he distributed his work evenly through future decades, he also spent some of his Jersey exile distributing his work illegally through France. He sent copies of his diatribe against Napoleon III and the Second French Empire, Napoleon-le-Petit, back to his homeland printed on extra thin pages and smuggled in hay bales, sardine tins, and even hollow busts of Napoleon himself. And it was this stand against an imperial ruler by which he smuggled himself into the minds of Vietnamese civil servants grappling with the injustices of French colonialism. But if his obsession with posterity and self-promotion are one reason for Hugo’s perpetual notoriety, his unexpected, posthumous ascendance in the Cao Dai religion was also born from the best themes of his work: the dissent in his political writing, the love in his poems for Léopoldine, and the humanism in his fiction.

The text of Hugo’s séances was not published until the 20th century and reached French Indochina (now Vietnam) in 1925, the year before the formation of Cao Dai. The faith was founded by a generation of intellectuals raised under the French school system, one which was notorious for beginning educational materials not just in France but in all the far-flung colonial holdings with the phrase “nos ancêtres les gaulois.” These words, “our ancestors the Gauls,” assumed for students an ethnically French ancestry and erased those who could not claim Gallic blood.

During this period, the Confucian education system was thrown out, students were expected to write in the romanized version of the Vietnamese alphabet, and their exposure to literature and culture was centered squarely on French achievement. In his novel School Days, Patrick Chamoiseau writes about his own education in the French colony of Martinique and the arrogance of teachers who outlawed patois while proselytizing the glory of French culture. “When he lectured he was addressing not us alone but the whole world. A select member of the human condition, he loomed over us in the solitude of that responsibility, and without really seeing us, or even taking us into account, he beat the barbarians of this earth over the head with the gospel of universal values.”

Hugo became a comforting presence and regular at séances, dictating poems and prayers for transcription, offering encouragement to fight against imperialist rule, and reiterating his prophecy that the next great world religion was on the horizon.

It is just this arrogance of the school system that USC anthropologist Janet Hoskins argues made Victor Hugo into one of the religion’s first spiritual advisors. When a group of young civil servants in Saigon began rebelling against strict French authority through experimentation with Eastern and Western styles of séance, Hugo’s spirit surfaced out of natural affinity—they had grown up steeped in the literature and admired him because of his ideals of justice, anti-imperialism, spiritual unity.

In contacting him through the spirit world, they were able to cut out the hypocritical middle-man of the French colonist and access the humanity that they saw in Hugo’s work and in the French ideals of “liberté, égalité, fraternité,” which were so absent under colonial rule. Furthermore, the text of his original Jersey séances was full of more than just the French ideals that founders hoped to access—they were also full of prophesy of a new religion: one that meshed heaven and hell, east and west, life and death.

In 1927, Pham Cong Tac, a customs officer who had been educated in the French system and steeped in Hugo’s work, was transferred to Cambodia because his interest in séances was seen as a threat to his French employers. It was shortly after this disciplinary measure and after the death of his young son that Victor Hugo first began sending messages to Tac. Most certainly Tac had read Chez Victor Hugo: Les Tables Tournantes de Jersey, which was reviewed upon its 1925 publication in newspapers at which many of his peers worked, and almost as certainly, the similarities in situation—exile, death of a child—were not lost on Tac. Hugo became a comforting presence and regular at séances, dictating poems and prayers for transcription, offering encouragement to fight against imperialist rule, and reiterating his prophecy that the next great world religion was on the horizon.

By 1931, he had made himself a fixture so much that two Cao Dai adherents were appointed Hugo’s “spiritual children.” Tran Quang Vinh was said to be the reincarnation of Hugo’s son François-Victor, while Dang Trung Chu took on Charles Hugo’s spirit. So through this, the young religion claimed a direct link to the “gauloise ancestry” that had been forced on its adherents during their education. But by 1949, in the midst of the Indochina War which liberated Vietnam from the French, Hugo’s role in the religion had changed. As a representative of the good of French culture, he was “indigenized” with a Vietnamese spiritual lineage. Tac proclaimed that Victor Hugo was actually the reincarnation of 18th-century Vietnamese poet Nguyen Du.

Today, Hugo is still featured prominently in the Tay Ninh temple and in the many others that replicate its motifs—and though séances and thus direct contact have been banned in the religion since 1975, he is now considered the head of foreign mission. 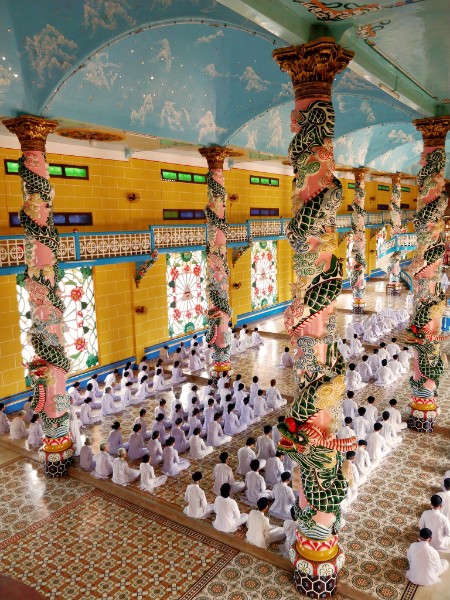 And the overseas mission is doing just fine without Hugo’s direct input by way of séances. The religion, as it is now, has the feel of an Eastern unitarianism; the headlines are tolerance, pluralism. At the Garden Grove Cao Dai temple in southern California, I was welcomed warmly, taught the motions for participation, and told to “pray my thoughts.” After the service, over a free and heaping plate of vegetarian pho, the two English speakers present—college students who had joined their mom to pay respects to their father at the shrine—told me that they don’t know anything about Victor Hugo, but reassured me I don’t need to either: the part of the religion that matters is the left eye of God, which hovers above all the other figures and represents the sacred that exists within each person.

On the other side of town, at the Anaheim Cao Dai center, two scholars of the faith passed cake around at their book release party. They discussed striking a balance between the esoteric, the exoteric, self-improvement. Dr. Hung Bui quoted Tennyson on being lifted from the evolutionary impulse to live in a way that is not “red in tooth and claw.” Ultimately, it is a religion with a humanistic approach, and its deep connection with literary figures—Shakespeare and Li Po and Pearl S Buck have also made their way into the pantheon of spiritual advisors—is just one more manifestation of that.

Abby Walthausen lives in Los Angeles where she writes and teaches. 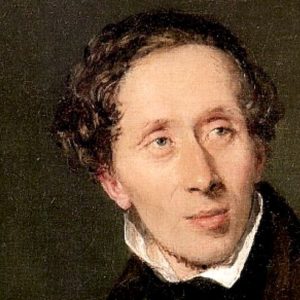 The year is 1819 and a lonely teenage boy is making his way by coach to the city of Copenhagen. From the top of a high hill...
© LitHub
Back to top
Loading Comments...