Belonging is Not a Language You Can Learn

On Translating a Childhood Between Five Countries

I drove to the University of Texas today with a fresh notebook and that first-day-of-school smile tugging at my lips. I’ve always been a nerd like that. I just turned 38, but I wasn’t on campus to begin a graduate program, or teach a class. I was there for Spanish Conversation I, from 1 to 3 pm, part of UT’s Extension School.

In the lobby, snowy haired seniors with nametags and notebooks gossiped like high school kids. I felt my excitement fade, a little, replaced by that gnawing nobody feeling. What was I doing here in the middle of the day, while others my age were pounding on conference tables, negotiating million-dollar marketing deals; storyboarding for a new Netflix show in LA, or, like my new boyfriend, Alejandro, getting ready to enter a prestigious MFA program in the fall, fully funded, with three years to “just write”?

You’ve already earned all the degrees you need, I told myself as I settled into the classroom, the first one there. All you need to learn to do now is chill. And figure out enough Spanish to know what the hell Alejandro’s Venezuelan family is talking about over the dinner table or at his cousin’s wedding in a month.

Five minutes went by. Ten. At 1:15, I went to the main office, where they told me that the class had been canceled. Back in the parking lot, I had gotten a $35 ticket for angling my car “against traffic flow.”

But that’s how they always parked in Singapore, I thought, where I had grown up. How was I supposed to know you can’t park like that in America? How do you say “very lame” in Spanish? I texted Alejandro, after complaining about the classes and my fine. Que chimbo, he wrote back. Well, at least I learned one useful phrase today, I thought, and headed back home.

Having been raised in five countries, home has always been a thorny concept. So has language learning. Two months before my family moved to Shanghai, when I was 11, we attended weekly Chinese lessons at a Cantonese restaurant, where a private tutor taught us the basics over egg rolls and hot and sour soup. 妹妹. (Little sister.) 饿死了! (I’m starving!)

Belonging is not a language you can learn.

We forgot the unfamiliar vocab as soon as we left the restaurant, and the six weeks of lessons did nothing to prepare us for the shock of Shanghai in 1992. They didn’t teach my mom how to exchange currency on the black market, as she would need to in order to shop for vegetables. They didn’t teach my father how to launch a capitalist joint venture in a Communist country. They didn’t teach me what Bun dan! meant, which is what everyone called me on the Shanghainese basketball team I joined later that year. (Stupid egg. I tended to run the wrong way in drills, since I couldn’t understand what the coach was saying.) And they didn’t teach my sister, Blair, how to say “I’m homesick,” which none of us considered confessing to one another, in any language. (我很想家.)

I would return to Shanghai 10 years later for a yearlong Chinese language fellowship. Despite my family’s three year stay in China from 1992 to 1995, and even after four years of Mandarin in high school in Singapore, and a couple years of college courses, I wasn’t fluent. My tones sucked. I was determined to fix all that: to not just learn to speak Chinese, but to become Chinese. A laughable project: I’m a 5’10’’ redhead.

But I just hadn’t tried hard enough before, I decided. Fueled by a burning desire to belong, I threw myself into classes and spurned late night foreign-student parties for demure dinners with Chinese students. One night, as I lifted a bowl to my mouth and shoveled rice in with chopsticks, the couple I was eating with told me I looked just like a Chinese person. I glowed. Finally. 谢谢, I said. (Thanks.)

Cut back to age 5. I’m living in Wimbledon, speaking with a British accent, and learning to jump rope. My younger sister, Blair, nimbly learned in a day. I’ve been at it for a week. I hurl it over my head; it gets tangled at my feet; I hop at the wrong time. My mother watches from the kitchen, shakes her head. But the next time she looks up, I’m at it for a full minute without messing up, my face a mask of focus.

In tennis lessons last week, the instructor told me to stop trying so hard.

How can I learn Spanish without giving up my own voice? Not English, but my polyglot, displaced, Heimatlos soprano? When I moved to Germany, after graduate school in Michigan, I reveled in the delicious slipperiness of “looking German” on the sidewalk. Of my last name: Sonnenberg. I refused to speak English at dinner parties. I married a German man from Romania and attended his family reunions, dressed in traditional Saxon garb. You look just like a girl from our village! his aunt said, regarding my getup: the petticoats, the 300-year-old belt, the embroidered black vest. Danke, I said, and glowed. Five years later, finally fluent in German, I abandoned my troubled marriage, and moved to Texas, where I cleared my throat, and resumed the Southern accent I’d had as a child in Atlanta.

Not this time. I don’t want to abandon my mien for another culture’s, to try and snuggle into its folds. In my first German class, the teacher asked how many of us were there to become German, on a path to citizenship. I raised my hand. You’re giving up your US passport? the Turkish girl next to me whispered, eyebrows raised. Oh, I said, blushing, and lowered my hand. No.

I am lucky: language learning is a luxury for me, not an economic or political necessity. I live in a country where I am safe, where I can work, and vote, and speak my native tongue. Out of mere curiosity, and a hunger for a greater connection, I can sign up for Spanish on Wednesday afternoons. I am not a refugee, fleeing to safety, nor an immigrant forced to fill out a job application in a foreign language. The stakes are laughably low.

But I have never spoken the language of unquestioned belonging or coherent community. When I see others speaking it, I rush to dictionaries and textbooks and lessons, I practice tones and umlauts and try to roll my “r’s.”

But belonging is not a language you can learn.

Alejandro is from Venezuela. He left Caracas to pursue an advertising degree in Austin, but the political crisis back home grew so dire that he never returned. Three months ago, the opposition party attempted to overthrow the authoritarian regime, and the protests were brutally quashed. He read the first reports of it on Twitter in Spanish and translated to me, as I lay on his chest.

Later that afternoon, I met up with his family, who were sitting at his brother’s house watching soccer, tense from a day of being glued to the news.

“I’m sorry,” I told his mother, in English, at a loss for words. What do you say, as someone who has never had a home country, to someone who is losing theirs?

I will sign up for another Spanish class. I will learn to conjugate verbs, distinguish between masculine and feminine nouns. I will learn how to say Being with you feels like home. Or simpler phrases, like Pass the remote. I will learn Venezuelan slang.

But I will never speak the language of Alejandro’s loss: the streets he can’t walk down, the childhood friends scattered across the globe, exiled by crisis, the humanitarian disaster unfolding there now.

Nor will he learn the language of my grief, the missing sister, the silent storm at the center of my family, the spinning globe, the dizzying disappearance of too many homes.

We can only ask how the other pronounces their pain. And listen, and fail to comprehend, and ask for another, slower translation, again.

Brittani Sonnenberg is the author of the novel Home Leave, a New York Times’ Editors’ Pick. Her nonfiction, short stories, and poems have appeared in Ploughshares, The North American Review, NPR, and elsewhere. She is based in Austin, Texas, and serves as a visiting lecturer for the University of Hong Kong’s MFA Program.

For the Love of Horses, From Girlhood to Old Age 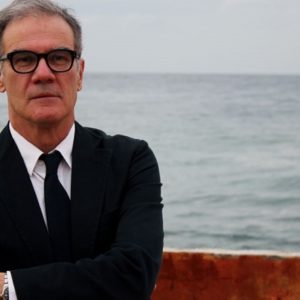 Edoardo Albinati’s The Catholic School is a recent winner of Italy’s biggest literary prize, il premo Strega, and is coming...
© LitHub
Back to top