TODAY: In 1917, English author Jessica Mitford, one of the six aristocratic Mitford sisters, is born.

Lauren Groff in conversation with Rebecca Makkai • How New Yorkers turned to poetry after 9/11 • On the race to a COVID-19 vaccine • How a hospice nurse helped change the course of the Miss America pageant • Hayley Mills on missing out on the part of Lolita • Remembering the humble origins of Saveur • Money, priorities, and the promise of an American childhood • On the “enchanting and terrifying” worlds of Ben Okri’s fiction • Dara Horn (reluctantly) revisits The Merchant of Venice • How to deliver a baby in the aftermath of a hurricane • Jill Louise Busby on the problem(s) of the writing residency industrial complex • Annabel Abbs considers the legacy of women hikers who blazed their own trails • On the young Indigenous basketball players who challenged colonial hegemony in Montana • How the mushroom we know from Disney movies earned its fame • An expedition across the “mysterious, inhospitable white void” of Antarctica • What we get wrong about borderline personality disorder • María Amparo Escandón on becoming a student of LA  • Sasha Sagan on the sea-change of our news cycle since 9/11 • On Tolstoy’s changing notions about brutality and war • Prisca Dorcas Mojica Rodríguez on white supremacy in higher education • Fictionalizing the Ritchie Boys, German-Jewish refugees who went undercover during WWII • Dawn Turner chronicles her sprawling family history in Chicago • Vanessa Bohns on our unbearable fear of social embarrassment • Joe Woolhead on documenting the chaos of the fallen Twin Towers 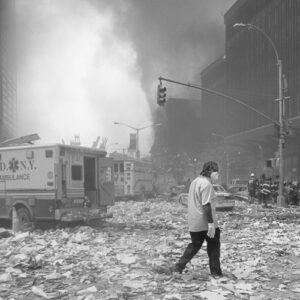 I thumbed a ride downtown and hurried toward the scene. It was a brilliant September morning, as has often been noted, but as I approached...
© LitHub
Back to top