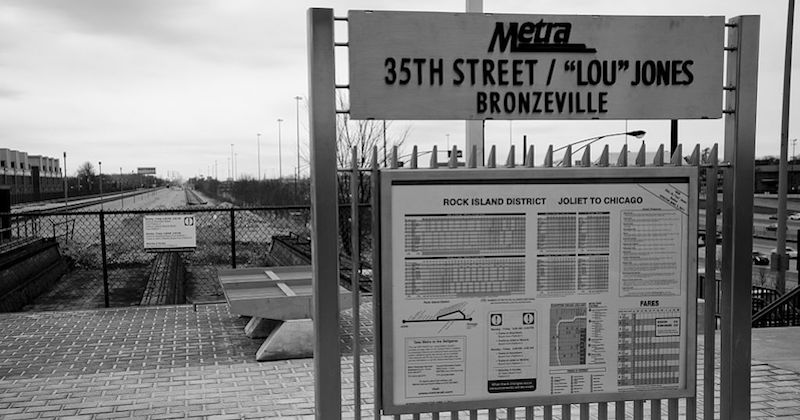 My earliest memory of myself is of my sister. My earliest understanding of my world comes from three women—my mother, grandmother, and aunt.

When I was a toddler and still an only child, my mother said that I began hiding under the dining room table. My parents and extended family had moved into a three-flat apartment building on Chicago’s far South Side, ten miles away from Bronzeville. It was my father’s idea for everyone to pool their resources in a rent-to-own plan to purchase the building. Mom, Dad, and I lived in the second-floor apartment with its two bedrooms and two baths. Granny and Uncle Al, Granny’s younger brother, moved into the first-floor apartment. Aunt Doris, pregnant with fraternal twins, Uncle Henry, and their two older sons moved into the garden apartment. Uncle Anderson, Granny’s older brother, and his wife and their two daughters occupied the third-floor unit.

Some Sundays, Mom invited everyone to our apartment for dinner. Afterward, my father, on the rare occasion when he was home, and my uncles pushed away from the dining table, eager to watch the last innings of a baseball game or The Ed Sullivan Show on the new color television console. Mom, Granny, and Aunt Doris remained seated at the table, nibbling on leftovers and reminiscing about the past. Mom called it “pinching off pieces of time.” I have no memory of when or why I joined the women. But I know I felt safe near them.

The men existed as clouds of cigarette smoke and spicy cologne and nylon sweaters and booming voices that pitched far away even when they scooped me up after I’d fallen asleep. But the women were flesh and blood, bricks and mortar. They were my fort. I felt cocooned in the cocoa butter and camphor smell of their legs, the sheer raucousness of their laughter. Over the years, I would come to savor their stories while watching the way the hem of the tablecloth draped over their round knees. It was similar to the way their lace handkerchiefs rested on their laps when they worried their white Sunday dresses might ride up too high.

For the longest time, I didn’t understand their conversations, especially when they scooted their chairs together, leaned into one another, forgetting the desiccating bones of the fried chicken or roasted turkey; forgetting the men just beyond the pocket doors, and even the little girl who had tucked herself in near their feet.

Invariably, one of the men would holler from the living room: “Y’all calling me? Somebody call the Lord?” Then the men would laugh, even though they knew better than to expect the women to answer; or to enter that dining room, the women’s domain.

I felt cocooned in the cocoa butter and camphor smell of their legs, the sheer raucousness of their laughter.

Mom lowered her voice: “You know what Lessie would have said… ” A brief pause always followed my great-grandmother’s name. Lessie, Granny’s mother, had been gone nearly two years by then, and her loss still felt like a wound that would never scab over. She had sat at the head of the table, and at the head of their lives. “‘If the Lord had made anything better, He’d have kept it for Himself!’”

The women stomped their feet and their laughter shook loose heaven and earth.

With my great-grandmother gone, Granny sat at the head of the table. She was a maid at a fine-glass company in Chicago’s Merchandise Mart. Although we called her “Granny,” the word does not call forth the proper image of a beautiful woman who was statuesque with light-brown skin and fashionably short galloping curls. But she had massive bunions that made her feet wide and boxy. They were the only part of her that she was self-conscious about, and she could spot someone sneaking a peek at her feet the way a buxom woman knows when her cleavage is under inspection.

Granny’s stories transported the women back five decades to when her parents fled Mississippi and the Jim Crow South for Chicago, joining tens of thousands of new migrants on their way to the city. It was during the first wave of the Great Migration and Granny was just three years old. If a newcomer to the table asked her where in Mississippi she was born, she flashed the same scowl she reserved for someone who sat in her seat.

“Who cares?” she snapped. “We said good riddance to all of Mississippi. All of it was the same place.”

The hardwood of the table muffled the women’s words, and for years I thought the Jim Crow South was the Kim Crow South; the struggle for civil rights was for silver rights; the Great Migration was the Great Miration.

“One of the first things my mama did after she arrived was get that long, thick hair of hers chopped off,” Granny said. “She wanted to wear the hats that the more sophisticated Black women wore.”

Lessie, tall with a beautiful deep mocha coloring, had wide hips and bowlegs. She weighed 50 pounds more than her husband, who was short and slight. Mom and Aunt Doris called him “Granddad.” Granny called him “Pops.” He died before I was born. When he arrived in Chicago in 1916, he got a job in the stockyards. After his first day, he ran home and told everybody about the traitor sheep—or “house nigga,” as he put it—that rounded up the other sheep for slaughter and then looked shocked and bewildered before his own throat was slit. He met a neighbor lady who proclaimed that Chicago indeed was the land of milk and honey. She would get into a car with her pail, driving to the stockyards to steal milk from cows before they met their fate.

“Then, it all quickly went to hell,” Granny said.

It was the narrow strip of land—initially called the Black Belt and later dubbed Bronzeville—where the city forced the influx of new Black residents to live. It was the place officials abandoned and neglected, allowing burned-out stores to stand, alleys to fill with mud, and mountains of trash to accumulate. Squalid tenements occupied blocks, and some were so run-down that their toilets at times flushed all by themselves from the reverberations of the nearby Illinois Central Railroad trains. The same ones depositing Blacks from the South. When Granny was six, her family lived in a tenement that was in such disrepair that one of its rats bit her on the forehead while she was asleep. She would dab makeup over the scar, two indentations left by the rat’s teeth, above her brow for the rest of her life.

“We did what Black people have always done,” she said, picking crumbs from the tablecloth, retiring the past. “We took a bunch of scraps and stitched together a world.”

My mother had become quite skilled at salvaging scraps and mending frayed seams. Her marriage had been an exercise in both. Pockets wadded with racetrack winnings, my father had promised her that this building would be a new start, an opportunity to build wealth and well-being. But on a Sunday night when the family did not come down for dinner, Mom sat at the kitchen table watching me eat. From there, she could see the lights from the white Christmas tree in the living room. Dad entered the kitchen wearing his overcoat, Sunday suit, nylon socks, and Old Spice cologne. He said he wore it loud so everybody knew he was coming.

“I’m going out,” he said. “Trying to make something happen for the rent.”

He closed the door and a few minutes later she heard the ignition on his black 1964 DeVille sedan attempting to start, flatlining and misfiring again before turning over. The car had three years on it but looked brand-new. It had been in an accident, which was the only way Dad could afford it on his cab driver’s salary. It still broke down more than it ran. The car, Mom would later say, was like her husband: slick and shiny on the outside but unreliable and filled with deception.

On the kitchen table lay her dream book for divining lottery numbers, her husband’s Rules of the Road booklet, and a hostile pile of bills that stared as hard at her as she stared at it. We had been in the building for four months and envelopes held notices demanding two months of rent. How Dad had convinced the owner that he could afford to buy the building in that rent-to-own agreement spoke to his charm and guile. Mom empathized. He had conned her, too, but she was no longer under his spell.

She’d been married to Dad for four years. Four years wedded to a man who lacked fidelity to her, to bill collectors, and, most of all, to the truth. For four years, she’d watched his dreams outdistance him because he’d been born in the wrong skin at the wrong time with the wrong ambitions. Still, why did he have to take it out on her? She decided to leave him. She had a part-time job as a receptionist at a dry cleaners a friend owned, and she’d begun bringing home plastic sheaths to wrap clothes in when she packed. No one else knew. Not even Granny and Aunt Doris, in whom she confided everything.

In the beginning—a time hard to fathom now—Granny and Aunt Doris believed my father was the perfect mate for Mom. She and Dad had met in church and sung in the gospel choir. Dad, like Mom, neither smoked nor drank any form of alcohol. Granny, who was also in the choir, loved the way his eyes closed and his jaw trembled when he sang “Precious Memories” in his thundering bass. She took careful note of the way he watched Mom, a soprano, hit her high notes during her signature solo, “The Only Hope We Have.” Granny and Aunt Doris stood slack-jawed the first time they heard Mom sing. They had no idea she possessed such a beautiful voice. Granny understood why this man looked at her daughter as though she wore a scarf of incandescent light.

Dad took Mom on a date, dinner at Gladys’ on the South Side. He told her that he wanted to own a fleet of cabs. When Mom told Granny, she loved that he aspired to something and had vision. And he was sincere and quiet, reserved about it, unlike her ex-husband, who was nicknamed Rooster for a reason.

Only he hadn’t. At least not in the way she hoped. Now, years later, it wasn’t just the bills that were past due, Mom thought as she touched her stomach. So was she. 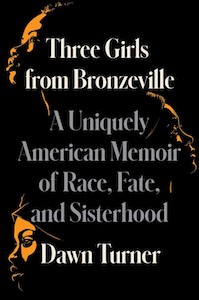 Excerpted from Three Girls from Bronzeville: A Uniquely American Memoir of Race, Fate, and Sisterhood. Used with the permission of the publisher, Simon & Schuster. Copyright © 2021 by Dawn Turner. 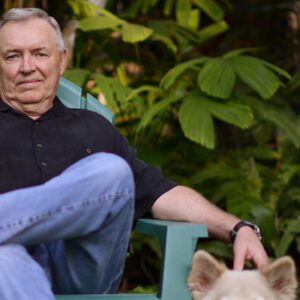 On today's episode of The Literary Life, Mitchell Kaplan talks to Les Standiford about his new book, Battle for the Big Top,...
© LitHub
Back to top
Loading Comments...