TODAY: In 1902, Beatrix Potter’s The Tale of Peter Rabbit is published by Frederick Warne & Co.

Lauren Groff on girlhood in the middle of nowhere • How to make your surroundings insect-friendly • Lucy Ellman talks matriarchy, Jane Austen, and ­Moby-Dick • Pico Iyer on the deep pleasure of Handel’s chorale music • The theory of (artistic) relativity, illustrated • How the Black Panther salute links the Black community • Christopher Sorrentino on bargaining his writing career for his father’s life • On the long-necked mouth-breathers we have to thank for our existence • Lauren Arrington on the “famously unrepentant” Ezra Pound • What would it look like to rethink safety from a feminist, abolitionist perspective? • Robert A. Jensen considers the aftermath of tragedies • Seth G. Jones on the new weapons of war • Frances Hodgson Burnett really, really loved gardens • Jon McGregor on learning about aphasia at the local support group • Retracing the failed utopian promise of fossil-fueled abundance • Natalie Starkey on the mysteries of space volcanoes • Omar Mouallem on the push and pull of his Muslim identity • Why we doubt accusers while protecting abusers • Jean Huang on Little Women and citrus as currency • Roy Peter Clark’s advice for writing cinematically • The literary film and TV you should stream in October • How the Zanzibari coast became famous… for modern-day pirates 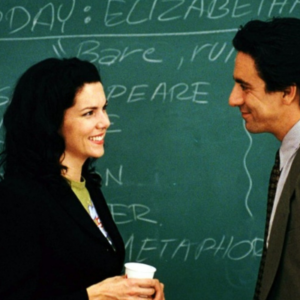 The other day, I was walking down the street and I ran into my favorite high school English teacher. It was delightful! And it was very...
© LitHub
Back to top