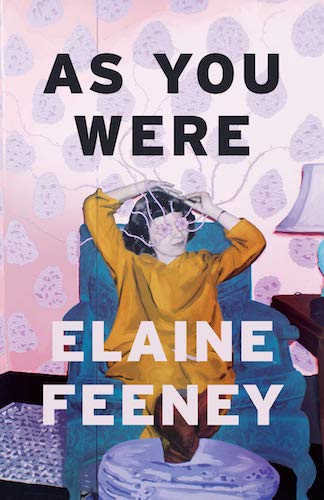 The following is excerpted from Elaine Feeney's debut novel, As You Were. Grappling with personal and institutional histories, the lives and struggles of women, the novel is a sharp, funny portrait of Ireland. Feeney is writer from Galway, where she teaches at The National University of Ireland. She has published three collections of poetry, and an award-winning drama with The Liz Roche Company. As You Were was published in 2020 by Vintage, and was shortlisted for Novel of the Year at the Irish Book Awards.

The Ward’s rattling windows framed the grey exterior shell of some of the Hospital’s buildings, including the Special Care Baby Unit. Clouds were billowing fast above us. The shadows of parents bent over in the Unit, known locally as SCBU, said quickly down through the nose, Scabooooo. It haunted our view, with nurses bending over the incubators and Perspex cots. I had watched my boys in those little cot homes, moments after birthing them. I was so terrified—terrified to interrupt them, to touch them, to pick them up, to bend an arm into a tiny jumper, or even just look at them in case they disappeared, or left me, or saw through me and were disappointed.

Beyond the long windows memories of picturesque Galway flickered at me, taunting me, in the manner of a picture, fit-to-be-made-into-a-picture.

Michal hoped his wife’s baby didn’t end up in Scabooooo and Margaret Rose blessed herself, said God was good and God was so good that he would be especially good to his wife Karolina after such a long journey away from her mother to be with him. Jane let out a terrified shriek. Hegs was oblivious to SCBU. He wasn’t entirely sure where he was born, couldn’t remember when Margaret Rose asked him and he laughed, awkwardly.

‘Well, that’s a lie . . . of course you know quite rightly where you were born,’ Jane said. ‘I, for one, was born at home,’ she announced, folding her palms out forwards like a rose opening and willing us all to engage in follow-the-leader.
Margaret Rose played along. She was born at home too, somewhere near Clare, and her surname was Sherlock, after her husband, proper order, though there was something unconvincing about the way she said it, as though she were still testing out the name, trying it on herself.

I was born here in this Hospital, I told them, and my maiden name was Hynes, and still is my name, and always would be. They all said aw, as if it was a shameful thing, so I quickly explained that my mother had no pain relief during my birth, that she was a solid and rather silent woman, practical, and that she spent forty-two hours in labor with me without eating a morsel or muttering a word, and they said ah, as if this were a good and positive thing and made up for my faux pas.

Jane continued to chat about her own birth, as if present in faculties and not just body. She was told repeatedly by anyone who came near her, from dinner-bringers to consultants, that she was taking up a bed on the Ward and that she really needed to get one of her family in, to help her consider ‘options’.

Nurse Molly Zane said she was born in Melbourne, and her mother was Irish or her mother’s mother. She didn’t have red hair or a love of the Irish or gift-of-the-gab according to her mother. Though Hegs and Margaret Rose most vocally insisted on the girl’s Irishness as though this were a compliment, Molly was Australian. She had a marvellously uncivil swagger and a wide face. She was told, she said, that Ireland treats its nurses poorly, doesn’t like its women too public, and takes them like tequila, quietly sharp, somewhat submissive, with a pinch of daft. So far, this theory had proved itself to be true.

Molly had visited the Molly Malone statue in Dublin when she first arrived in Ireland, the only touristy thing she did, though Bobby her wife loved touristy things. But Molly went along for Ms Malone, her namesake, had that song her mother would sing to her when she was a little pissed. She was unimpressed with the statue, and as she looked down on her large cold breasts and watched her push her cart, make a living, she couldn’t help but wonder why Molly Malone was left out to the mob, day and night, why we could all ogle her fine cleavage from an open-top bus ride, why a nation had chosen to demean a woman like this? But did it worry her? No. Molly Zane considered a lot while worrying about very little.

‘When I think about how the world just turns,’ she said, jabbing my arm with a needle, ‘and holds on, ya naw, I get very overwhelmed, darl. But I don’t worry, waste of time.’

The yellow sun shone for everybody, and this, it seemed, pleased Molly Zane. Homes stayed standing, the moon did things to the tides, babies left on doorsteps were taken in and given out again, planes stayed in the air. And when you lay on the ground on a summer’s day, it looked after you, held you in its earth hug as it gently turned. For the past twenty-seven years, Molly Zane’s head had not risen above thirty-seven degrees.

‘Ah, only England, few trips, yeah mostly England, lived behind Wembley far a few years, loved it, a big gang of us would head off to Horse Shows up narth, lots of family and always business to be done up . . . ya knows the ways?’ She nodded at her Nokia, and back at us. It wasn’t a question. It was a statement of fact, we all returned nods in her direction, though in truth, none of us knew the way of Margaret Rose’s business.

The day Molly said yes to travel with Bobby, was the first day she scalped a cadaver.

‘Scientists,’ she said, ‘harvest cells from the scalps and brains of cadavers.’

‘Once I watched my anatomy teacher slice the forehead skin of a cadaver and peel it back. Eventually the brain was opened like an avocado sliced. Popular now, avocados,’ she said. ‘Miss the ones from home.’

Excerpted with permission from As You Were by Elaine Feeney (Biblioasis, October 2021)

The Vanishing Point by Elizabeth Brundage, Read by a Full Cast 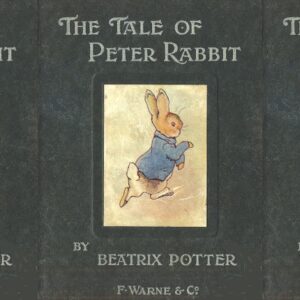 Lit Hub Weekly: September 27 – October 1, 2021 “If you determine to abandon me, I will be doubly ambitious.” How to deal with rejection (and get revenge) like...
© LitHub
Back to top