The 10 best translated novels of the decade • Meet the National Book Award finalists (who kindly agreed to answer some of our questions) • On the royal spectacle of The Crown, or: Why Claire Foy will always be the Queen in Will Self’s heart • “Literature should not disappear up its own asshole” and more essential advice from Kurt Vonnegut • Deirdre Bair recalls the difficulty of convincing Samuel Beckett of just about anything • The wondrous world of Russian toys: Nabokov on finding art in the commonplace • On the build-up to the legendary Baldwin-Buckley debates • Jeffrey Rosen speaks with Ruth Bader Ginsburg on the past, present, and future of abortion rights • Learning to unsay the R-word: Amy Silverman on changing the way a culture speaks • James Chesbro on the art of the running memoir, from marathoners to Murakami • John Richardson goes inside the artist studio of Georges Braque • Broken heart? Immanuel Kant is here to help! • When bad studies become pro-war political tools: on the lack of science linking testosterone to violence • Why resistance is foundational to Kurdish literature • An oral history of Guantánamo • Adam Platt on the time Mario Batali called him “a miserable fuck” (and other notable chef tantrums) • Philip Metres on Patrick Radden Keefe’s Say Anything, and the elusive lure of reconciliation in Northern Ireland • The secret society of women writers in Oxford in the 1920s • Remembering the moments before

the Charlie Hebdo attack • John Freeman on the power of the whistleblower • On the unpublished ending of Picnic at Hanging Rock, and other mysteries • Sarah Wagner on the many lives of Lexington, Kentucky • On America, the French magazine attempting to explain the Trump Era • What do you so when your writers’ block is the result of a family curse? • What does it mean to be designated a City of Literature?

15 of the Best Queer Debuts of 2019: feating T Kira Madden, Tegan and Sara, Bryan Washington, and more • Parisian Lives author Deirdre Bair recommends five books that influenced her writing life, from Ulysses to A Room of One’s Own • Loving The House of Mirth, hating Rabbit, Run, and more rapid-fire book recs from Lydia Kiesling • Erin Morgenstern’s The Starless Sea: exquisitely formed or devoid of atmosphere? • Michael Crichton’s posthumous Andromeda sequel, Lydia Davis’ collected essays, and a biography of Carrie Fisher all feature among the Best Reviewed Books of the Week

5 international crime novels to read this November • Why should debuts get all the fun? Lisa Levy celebrates the sophomore efforts of 8 rising voices • Michael Gonzales on being shot on his Brooklyn doorstep, then learning that the bullets traced back to a legendary hip-hop feud • Molly Odintz catches up with Martha Grimes, acclaimed author of the Richard Jury series • Will Thomas takes us on a global tour of Victorian Era historical mysteries • Olivia Rutigliano on the long, complicated history of “Charlie’s Angels” • Nile Cappello on the real-life inspirations and unintended consequences of Heavenly Creatures • Michael Seidlinger looks at the most terrifying home invasions in fiction • Curtis Evans on the tragic tale of a Golden Age crime writer and his murdered publisher • A reading list you can’t refuse: Sean Rea on six mafia classics 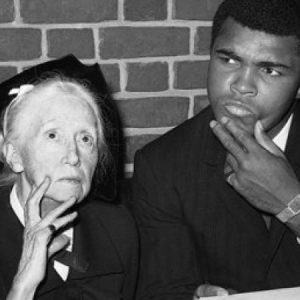 It's true. The wonderfully unlikely collaboration between the world's most famous boxer and the "elderly queen mother of American...
© LitHub
Back to top