Learning to Unsay the R-Word

Amy Silverman on Changing the Way a Culture Speaks

As we drove to her high school one morning not long ago, I asked my daughter Sophie what words she’d use to describe herself.

Sophie did not use the word retarded, though some people might. I’ve never heard her say it. She’s never heard me say it, either. I don’t use it. Anymore.

To be totally honest, I miss the word.

I imagine it’s a little like how a smoker feels once she’s quit. Relieved to be rid of cigarettes, disgusted that she ever used them. Healthy, now. A better person for it. But sometimes, there’s that sense that nothing else will ever deliver quite the same satisfaction. Years later, I still find myself craving the r-word.

I went cold turkey in 2003, the year Sophie, my second daughter, was born. In the recovery room post C-section, I forced my drugged eyes open long enough to ask my husband Ray, “What are you doing?” and closed them again when he told me he was measuring the placement of Sophie’s ears, a marker of Down syndrome.

I kept my eyes closed for as long as I could—which wasn’t long. I had to figure out how to take care of this baby, how to be her mother. I had never met a person with Down syndrome. Nothing in life had prepared me for this, including more than a decade as a journalist covering social justice issues.

In those first hazy days, I had to admit to myself that I’d never written about intellectual disability because it made me uncomfortable. I was that person who changes lines in Safeway to avoid the bagger with Down syndrome.

I thought a lot about the damage we might do by eliminating the use of certain words, even the most offensive ones.

I held my tiny baby girl and cried and told Ray, “I’ve ruined our lives.” I asked my mother if she felt like we should change Sophie’s name, since it means wisdom in Greek. And I thought about all the times I’d used the word retarded.

As you might imagine, I was pretty disgusted with myself. There was so much I couldn’t ever fix, but I vowed to change my language. I never used the word retarded again to describe someone who was annoying or in any way “less than.” But I still used it, for a while anyway. It’s there in some of my early writing about Down syndrome. Sixteen years ago, “mental retardation” was the preferred medical term for a person with an IQ below 70.

I think it will always be my preferred term. From French, the word retard means “to slow,” and as my daughter grew, achieving many things other kids did, but not as quickly or completely—it felt like a really apt and gentle description. I imagine that for Sophie, it’s like she’s moving through Jell-O, that extra 21st chromosome making it more difficult to do everything from walking to speaking to doing algebra.

The truth is that if you’re going by the numbers, retarded isn’t the worst thing you can call a person with an intellectual disability. There are so many words that can describe a person of lesser intelligence, and earlier in the 20th century the terminology was actually broken down by IQ point: moron (50-69), imbecile (20-49) and idiot (below 20).

I try not to, but sometimes I slip and use those words. You probably do, too.

But I never use the r-word.

From Sophie’s earliest days, I couldn’t bear to hear it. I flinched every time and almost always, I called the user out—interrupting conversation at a nearby restaurant table to show the offending diner a photo of baby Sophie, or stopping a friend midsentence at a party to shake my finger in her face.

Like a smoker who quits and can smell second-hand smoke a block away, I couldn’t stand to be around that word. I had become the language police—not a good look for a First Amendment-loving journalist who insists on her right to use the word fuck, but I couldn’t stop.

In 2009, Special Olympics launched a campaign called “Spread the Word to End the Word.” The following year, President Obama signed Rosa’s Law, barring the use of the term mentally retarded in federal documents. I still see “mental retardation” on outdated forms at the pediatrician’s office and sometimes I hear teenagers call each other retards. But I don’t encounter the r-word nearly as much as I used to.

That doesn’t mean that life is necessarily better for people with intellectual disabilities (the preferred term—of the moment). Language changes so quickly these days, faster than ever before thanks to call-outs on Twitter, conversations on Facebook, the 24-hour news cycle. Since Sophie was born I’ve seen the term “special needs” come in and out of vogue and watched debates over the relative value of “differently abled” versus “disabled.”

I think it’s wonderful that so many people are making so much effort to use correct language. I spent the summer of 2018 editing the style guide for the National Center on Disability and Journalism, which is housed at the Cronkite School for Journalism and Mass Covmmunication at Arizona State University, in my home town, Phoenix.

I learned a lot from that editing project—like that it’s always best to ask the person how they’d like to be described. That it’s important to use “person first” language, such as “a girl who has Down syndrome” rather than “Down syndrome girl” but that some people with autism would rather be called autistics, and most people in the deaf community want to be called deaf or hard of hearing. I’ll never use the term “wheelchair-bound” again.

And I thought a lot about the damage we might do by eliminating the use of certain words, even the most offensive ones.

The National Disability Style Guide recommends that no one ever use the word retarded—either as a slur or to describe a medical condition. I have a personal caveat. I don’t like the idea of erasing history, of never acknowledging how and why that word can be so hurtful.

Language changes so quickly these days, faster than ever before thanks to call-outs on Twitter, conversations on Facebook, the 24-hour news cycle.

I first had to acknowledge that caveat when Sophie was in fourth grade and her teacher assigned the book Because of Winn Dixie, a modern classic by Kate DeCamillo. Sophie and I read it together and when we got to chapter 13, I emailed the teacher to ask how she intended to handle the inclusion of the word retarded. She sent back an amazing response, explaining how important it was to educate kids about such words as they got older, and added that later in the year, she’d assign Out of My Mind, Sharon Draper’s incredible young adult novel about a girl who cannot walk or talk and is initially thought to be unable to communicate.

I got it. I am still grateful to that teacher.

But the best use of the word retarded came this summer on the big screen.

The movie Peanut Butter Falcon was released in theaters in August. Starring Dakota Johnson and Shia LaBouf and introducing a new actor named Zack Gottsagen, who has Down syndrome, it’s a Mark Twain-esque adventure tale in which a young man escapes from a nursing home where he’s been forced to live.

It’s unusual to see an actor with Down syndrome (or any real disability, for that matter) so this movie would have been a big deal even if it wasn’t so good.

But it is so good, even if you have absolutely no interest in Down syndrome. It’s closing in theaters soon, due to be released on DVD November 12. I love that it doesn’t sugar-coat anything, including language.

There are three instances where Zak, the main character, is called a retard. Like always, I flinched when I heard it and saw the pain and pride in the character’s face as he flinched, as well.

Shellie Gottsagen, Zack’s mother, has watched the movie dozens of times with different audiences across the country and in England.

Every time, she says, “You can feel the audience get mad. They don’t like it. But I think that’s exactly the point and I think it was well used.”

I agree. There’s nothing I can say to a person who uses the r-word that will come close to the impact this movie has.

Shellie told me that she’s had her own struggles with the word, having intervened at school when Zack, now 34, was taunted with it as a child. No one on set took the decision to use it lightly, she says.

At one point early in the movie, a young kid calls Zak a retard and tries to force him to dive off a platform, problematic since Zak can’t swim. Shellie recalls that when it was time to film the scene, the young actor was riding in a van with Zack.

“He reached over and said to Zack, ‘I need to talk to you. This is my role and I really want to be an actor and I have to do my line.’

“And then the kid started crying.”

I asked Shellie if I could speak with Zak about the word, and she promised to ask him. I never heard back. I get it. It’s not easy to talk about.

As we approached the high school, I broke my own rule and asked Sophie a question.

“Have you ever heard the word retarded?”

“Because it’s a bad word to represent DS.”

Does she hear kids use it at school?

“No.” Sophie pauses. “Not that often.” Never to describe her, she acknowledges. I ask her, what do you do when someone uses it?

We pull up to the school. She kisses me goodbye, hefts her backpack and slips into the crowd of kids.

Amy Silverman is a commentator for KJZZ the National Public Radio affiliate in Phoenix. Her work also has appeared on NPR’s This American Life and in The New York Times. Silverman holds a master's degree in journalism from Columbia University. She is the author My Heart Can't Even Believe, and she lives in Arizona with her husband Ray and daughters Annabelle and Sophie.

The Failure to Protect Our Children Where They Need It Most

Kimi Eisele on Using Reality to Build a Post-Apocalyptic World 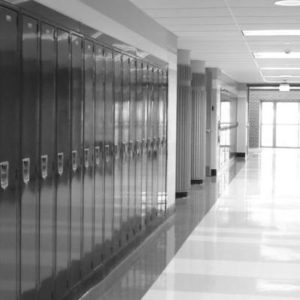 The Failure to Protect Our Children Where They Need It Most

When, after 27 years, my family left Brooklyn for Orlando, my New York friends had one of three responses: Are you crazy?...
© LitHub
Back to top