Nabokov on the Wondrous World of Russian Toys

Art is a permanent wonder, a wizard with a trick of putting two and two together and making five, or a million, or one of those gorgeous giant numbers which haunt and dazzle the delirious mind writhing through a mathematical nightmare. Art snatches at the simple things of the world and twists them into wonderful shapes, drenches them in color, making Madonnas out of Florentine flower-girls and transforming into great symphonies the tiny sounds of birds and brooks.

Commonplace words, our petty dreams and worries, become magic on the stage when Art, the whimsical wizard, touches with rouge the lips of life. For Art knows there is nothing so plain or absurd, or ugly, that cannot in a certain light swell into beauty, and Russian Art among all others has been especially successful at proving this.

When I say so I am not referring to writers such as Gogol, that genius of the grotesque who would find the secret of sublime comedy in the mud pool of a dismal little town or in the bloated features of a provincial clerk; neither am I thinking of Dostoevsky’s dark wanderings through the realms of the distorted and the mad. It is of a certain byway of the stage that I wish to speak.

The Russian soul is endowed with the power of breathing its own life into those various forms of Art, which it finds in other nations; so it happened that the French “cabaret” (a rendez-vous of poets, actors and artists), without losing anything of its lightness and brilliancy, acquired in Russia a distinct national flavor. Folklore, songs and toys were magically recalled to a new life, producing the effect of those

lacquered curves and patches of rich color which are associated in my mind with the first blue days of a Russian spring.

Well do I remember those days—and that merry fair, the “Verba,” a living symbol of earth’s quivering gladness. Wet bunches of fluffy, pearl-gray catkins cut from the countryside sallows have been brought to town and are being sold on the boulevard along which stretches a double row of wooden stands put up for the occasion. Between these circulates an endless flow of buyers and the glossy purple mud under their feet is all speckled over with spilled confetti.

Aproned hawkers cry out their wares—tiny cotton devils pricked onto a cardboard shield, and red elongated balloons blowing out with a particular squeak, and glass tubes filled with colored alcohol in which dances a bottle-green imp when an india-rubber membrane is pressed at the bottom. And on the stands, under the drip-drip of the brown birch trees glistening in the March sun, other wares are displayed,—cream wafers and Eastern Delight, goldfish and canaries, artificial chrysanthemums, stuffed squirrels, gaudily embroidered shirts, sashes and kerchiefs, harmonicas and balalaïcas—and toys, toys, toys. Among those my favorite was a set of a dozen round wooden “babas” (peasant women) each one a shade smaller than the next and hollow inside, so that they fitted one into another.

Much did I love too a toy consisting of two carved wooden figures, that of a bear and that of a peasant. These two could be made to hit by turns a wooden anvil in the middle. And there were also queer brightly painted round-bellied little dolls loaded with lead so that no force on earth could make them lie quietly on one side,—they would always turn up straight again with a brisk oscillating movement. . . . And over all this rolls the glossy blue sky, and wet roofs glisten like mirrors, and the golden ding-dong of the church bells mingles with the shrill cries of the fair. . . .

This world of toys, color and laughter—or better to say the condensed impression of that world—has been magically revived on the stage of the Russian “cabarets.” I have spoken of the “Verba” only to show what I mean by the romance of Russian folklore expressed in bright smooth wooden toys. These toys have been made to live and dance on the stage. Art has disclosed the very soul of their shining hues.

But this is not all. There is yet another deep beauty, another enchantment in the inmost self of Russia. And the “cabaret” being essentially an artistic variety, an expression of different moods, of laughter and dreams, of sunshine and dusk—this other kind of beauty has likewise been rendered by art. For if Russian headgears and cupolas are marvelously bright-colored there is another side of the Russian soul which has been expressed by Levitan in painting and by Pushkin (and others) in poetry.

It is that misty sorrowful sway of national songs, “the tenderest on earth”—as an English poet put it. They ring, those songs, along lonely roads and at sunset on the banks of great rivers. And then there is the strange charm of the pale northern night gliding ghostlike through a dream-city. And perhaps deeper than anything else in the mystical intensity of its passion—there is the melody of gypsy love.

Thus the spectator is made to laugh and dream alternatively. Wooden soldiers, ruddy-faced dolls, moujiks looking like bearded samovars pass and dance before his eyes, and, then, pale-faced Romance sweeps by singing of sleepless nights and distant lands.

And what is life itself—if not another “cabaret” where tears and smile are weaved into one wonderful many-colored tissue? 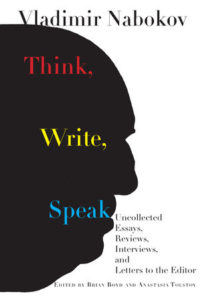 Excerpted from Think, Write, Speak by Vladimir Nabokov; Edited by Brian Boyd and Anastasia Tolstoy. Copyright © 2019 by Vladimir Nabokov. Excerpted by permission of Alfred A. Knopf, a division of Penguin Random House LLC. All rights reserved. No part of this excerpt may be reproduced or reprinted without permission in writing from the publisher. 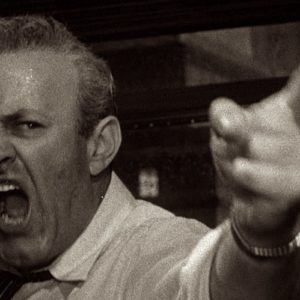 Picture the world through the eyes of the jerk. The line of people in the post office is a mass of unimportant fools; it’s...
© LitHub
Back to top
Loading Comments...