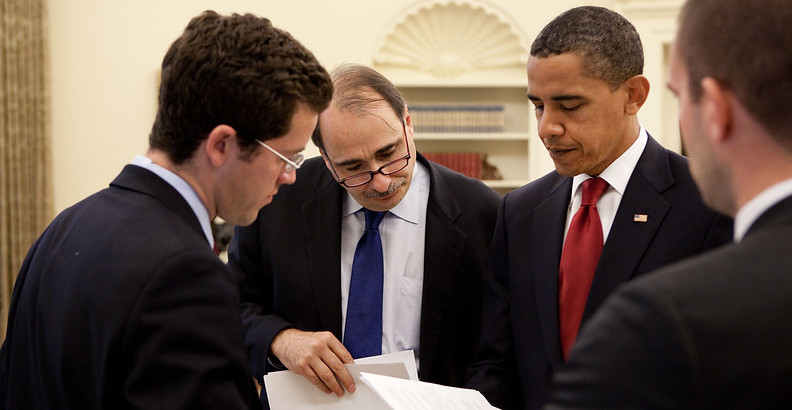 What Was It Like to Be Edited by Barack Obama?

Former Speechwriter Adam Frankel on Writing for a Writerly President

For all the eye-rolling that quotation induced on the speechwriting team—and it induced quite a lot, both at the time and later—I never felt Obama was being unfair or inaccurate. He was a better speechwriter than any of us.

I got a closer look at Obama’s writing in the White House, where he was a short walk away, than I’d had on the campaign, where edits usually came in a quick call or email.

“Something about this draft just doesn’t feel right.” That, or something like it, is probably the most frequent feedback a speechwriter ever receives, and it is typically accompanied by precisely zero suggestions on what to do about it.

I never heard Obama utter those words. In fact, I was always struck by the precision of his edits. If a certain sentence or structure had problems, he’d tell us exactly how to fix them. During one Oval Office meeting, he leaned over my shoulder as I scribbled his edits as quickly as I could. “Actually,” he said, pointing to a colon I’d inserted, “that should be a semicolon.”

“Pedestrian, but serviceable,” he once told us.

Occasionally, his edits were offered conditionally. “That’s just my suggestion. Do what you think is best.” No need to worry, Barack Obama, my 26-year-old self would think—I’ll take your edit.

On most speeches, we’d get line edits without any overarching feedback on the quality of the draft. (He was too busy to offer it, and we didn’t expect it.) But if a speech were mediocre, he’d let us know. “Pedestrian, but serviceable,” he once told us. And he’d also let us know if he thought we’d done a particularly good job.

Sitting with the candidate in a hotel suite in Denver on the eve of the 2008 Democratic National Convention, Favs, Ben, and I, along with a recent addition to our team, Sarah Hurwitz, who’d written for Hillary Clinton in the primaries, talked over some final changes to his nomination acceptance speech.

As we were wrapping up, Obama looked at us. “Hasn’t Favs done a great job leading this process?” he asked. We agreed.

Obama got up to leave, and turned to Ben. “Didn’t you help on Biden’s speech?”

“That was a great speech.”

Obama took a few steps toward the door. “Sarah,” he said, looking back. “Didn’t you help Michelle on her speech?”

“That was great, too,” said Obama, taking a few more steps toward the door.

Turning back one last time, he looked at me. “Frankel,” he said, and paused—unable, in that moment, to think of another speech I was writing, “I know you’re working on something great, brother,” and started chuckling. Characteristically inclusive, he hadn’t wanted any of us to feel left out.

In the White House, where the size of our speechwriting team multiplied, collaborations among speechwriters became mostly impractical, and each of us gravitated toward separate portfolios. Outside the necessary allocation of policy and political speeches, I also cultivated something of an unusual niche, including eulogies.

“Soothing Pain with His Pen,” read the headline of a profile in the Los Angeles Times. “The first thing we do when prominent people pass away, after we mourn their losses,” David Axelrod wryly told reporter Peter Nicholas, “is we call in Adam to begin work on the appropriate remarks.”

“The presidency is not merely an administrative office,” Governor Franklin Roosevelt told a reporter before entering the White House. “That’s the least of it. It is more than an engineering job, efficient or inefficient. It is preeminently a place of moral leadership. ”

Working with Obama on these speeches allowed me to make, I felt, a small contribution to his moral leadership of the country, of the world.

I also had another motivation. These remarks rarely drew the same scrutiny—from Axe or other senior advisors—as policy or political speeches. On the list of White House communications priorities, where an event’s importance typically reflected its likely impact on the day’s news cycle, these speeches were simply not at the top.

One person who seemed to reject that prioritization, however, was Barack Obama. And taking the lead on these topics, I knew, would allow me to collaborate with him in a way that was, almost uniquely in the White House, free from the involvement of others.

It was not lost on America’s first black president, of course, that his frequent collaborator on civil rights speeches was white.

Speeches that might have been entirely conceived and exclusively written by a speechwriter under any other president received from Obama large quantities of that scarcest of presidential resources—time.

One obscure speech that received such abundant presidential attention came in early 2010, when Obama agreed to speak on Martin Luther King Weekend at Vermont Avenue Baptist Church, near the White House. The speech would take place days before Scott Brown’s victory in the Massachusetts special election to fill Ted Kennedy’s seat threw health-care reform in doubt.

It was not lost on America’s first black president, of course, that his frequent collaborator on civil rights speeches was white. “Go as far as you can on this,” he had instructed on another set of remarks after tasking me with writing about some of the challenges in the African American community. “There may be some things you may not feel comfortable saying that I need to write myself.”

Occasionally, when I asked if he had any guidance on a particular speech, he’d say, “I think you’ve got this one,” and move on to the next item on the agenda. Never, I should add, did I feel as confident hearing those words as he seemed to be delivering them.

He did not, however, express such confidence on this speech. He asked me to identify a moment of triumph followed by uncertainty in the civil rights movement, which, with help from King biographer Taylor Branch, I did. And he told me he wanted to reflect on the high hopes that had accompanied his own election, and the lessons King could teach us about heeding our vision in the face of the uncertainties of our own time.

The draft included a line about the “hard winters” endured by “the slaves and the freedmen who rode an underground railroad, seeking the light of justice under the cover of night. ” I thought about my own family’s hard winters, the ones Bubbie and Zayde had endured so many years earlier.

Talking over a draft with Obama, I was struck by a passage he asked me to add—and later, reworked several times. A passage that had nothing to do with Martin Luther King Jr., the civil rights movement, or the challenges facing the United States in 2010. A passage that was personal. “Folks ask me sometimes,” he wrote, “why I look so calm. Fact is, there are times when the words hurt. There are times when the barbs sting. There are times when it feels like all the hard work is for naught, and change is so painfully slow in coming and I wrestle with my doubts. But let me tell you—it’s faith that gives me peace.”

I saw Obama regularly in the White House, often several times a week. Occasionally, a few times a day. Rarely did I see him open up. I was moved, then, reading this passage, to get even this small glimpse into his emotional life.

When I left the White House in late 2011, I gave the president a gift: a 1935 first edition of An Interpretation of Christian Ethics by Reinhold Niebuhr, a theologian he admired. I’d first learned about Niebuhr years earlier from Pa, who would often recite his Serenity Prayer. Inside the cover, I included a note. What had been so meaningful about the past several years, I wrote, was the chance to serve not only a president I so deeply believed in, but a man I so deeply admired.

As proud as I was of serving the most progressive president since the era Sorensen helped usher in, of all the meaningful changes the Obama administration delivered and pursued in the United States and around the world, I was equally proud of serving a man who displayed so much integrity, who hewed so closely to such a high ethical standard in his own life.

Reflecting on that note today, I’m struck by the way I distinguished between Obama the president and Obama the man—a distinction I drew partly, I think, because of what was happening in my own personal life.

At a time when I was reeling from decisions I considered grossly unethical, I had a boss who conducted himself in a way that was unfailingly proper, a paragon of how to act honestly, respectfully. A model family man, lovingly devoted to his wife and daughters.

Obama was not only a moral leader, a role model, for the country and world, I now see. He was also a role model for me. 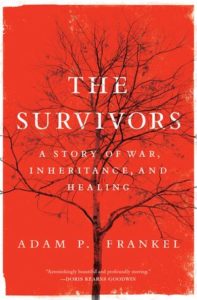 Adam P. Frankel is an advisor to Emerson Collective, a social change organization. He was a speechwriter for President Barack Obama from the 2008 presidential campaign through Obama’s first term in the White House. Adam is a graduate of Princeton University and the London School of Economics, where he was a Fulbright Scholar. He lives in New York City.

On the Difficulty of Convincing Samuel Beckett of Just About Anything 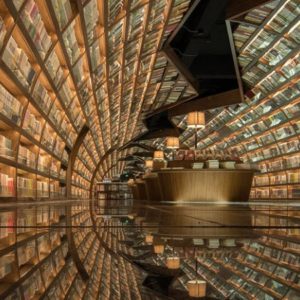 Plagiarism as a practice isn’t new. Tan Lin has mastered a sort of archivist poetry he calls "ambient literature," using...
© LitHub
Back to top
Loading Comments...