On François Busnel's Mission to Chronicle the Trump Era

Shortly after the stunning US presidential election in 2016, a French journalist with a lifelong love for American literature seized the political moment to give American authors a platform to express themselves in what would become a 200-page magazine called America—in French.

Fifteen days after the election, François Busnel sat down in an office in Paris with a potential partner, Eric Fottorino, a journalist and author, and began to dream about a magazine they’d finance together that would be all about the US, and how and why Trump had come to be president.

Fottorino, who directed Le Monde newspaper for a few years, had recently launched Le 1, a weekly paper that focuses on a single subject in the news with essays by a variety of experts, including authors and poets, and had already wanted to work with Busnel. Busnel had covered books and literature for a number of newspapers and magazines before becoming the host, more than ten years ago, of La Grande Librairie (The Big Bookshop), a weekly television show where French and international writers talk about their new books.

Within the French literary and publishing worlds, Busnel is well-known for his success in running a cultural show during prime time and his enthusiasm for reading. When he likes a book, he doesn’t hold back; RE-MAR-QUABLE, he exclaims frequently. His Grande Librairie has an average of five to seven hundred thousand viewers, which in this day and age of diminishing readers and TV series binge-watching is no mean feat. Busnel and his show have been called the heirs to Bernard Pivot and his legendary literary show, Apostrophes, which ran for 15 years and had an average of three to five million viewers each week.

Although Busnel hosts writers from all over the world, his passion for American literature and fascination with the US have never been secret; he is vocal about his love for John Fante, who he started reading in high school, he’s been photographed in the French press with his 1966 Mustang convertible, and during his career he has developed an impressive address book that includes American authors from the late Toni Morrison to Paul Auster and Russell Banks.

“I wanted to know what was going on in the minds of people who voted for Trump. I want to understand.”

During those winter months of 2016 and early 2017, as fallout from the election reverberated around the world, Busnel and Fottorino worked on the concept for their magazine. The election results surprised Busnel, he said, but not that much.

“When I read novels by Laura Kasischke, or Russell Banks describing blue collar workers, this told me about a country that didn’t look like what the experts were talking about,” he said. “It’s a divided country, that is genuinely democratic, but where people are angry about the economy, where there’s an enormous social fracture, and people want a change even if it means voting for someone like Trump.”

Busnel’s initial idea was to ask American authors to analyze and write about their country for a French readership every three months for four years—one presidential term. But he also wanted to commission French authors and journalists to travel to the US and write about their impressions. New Journalism had always been a great inspiration to him. “For me, Joan Didion, Gay Talese, George Plimpton, and Tom Wolfe were a way of seeing a compromise between literature, politics and society,” he said. “I wanted to know what was going on in the minds of people who voted for Trump. I want to understand. I also wanted to create a beautiful object, something that people would want to keep, that was independent and add-free. I contacted novelists who I really respect, and asked them, ‘What can we do together?’” 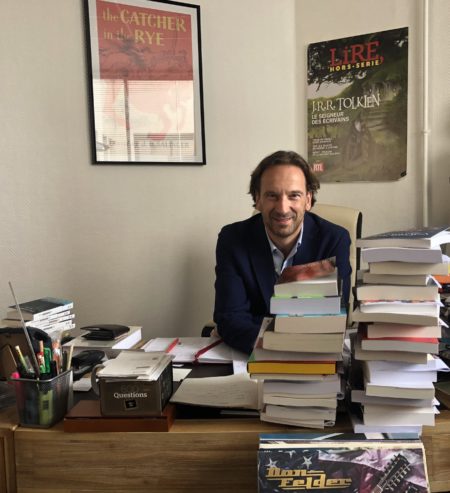 That’s where Busnel’s formidable address book came in hand; he contacted Toni Morrison, Paul Auster, Salman Rushdie, and Russell Banks and others, telling them about his idea and asking for interviews, essays, or fiction. Toni Morrison wrote back, saying that if he wanted an interview, she would be waiting for him in 15 days. Fifteen days later, Busnel was at her door.

Once Morrison was on board, “all the other writers followed,” Busnel said.

The first issue of America was published in the spring of 2017. With handsome graphics and illustrations, it featured Busnel’s 24-page interview with Toni Morrison, an assessment of Barack Obama’s presidency by Ta-Nehisi Coates, a letter to young writers by US-based Irish author Colum McCann published in its original English and in French, an essay by Louise Erdrich and an extract from Jay McInerney’s novel Bright, Precious Days in French translation. Busnel also sent Franco-Congolese author Alain Mabanckou to Los Angeles to document his impressions. America’s first issue sold 60,000 copies.

Since then, each issue, loosely based around a theme, has sold around 40,000 copies, which is “very heartening,” Busnel said. “Of course, a lot of the readers are people who watch La Grande Librairie, but the TV show is free, whereas for America they’re paying 19 euros ($21).”

America can be seen as a form of sophisticated literary activism, and Busnel is at the perfect juncture in his career to make his literary ecosystem economically viable. Most of Busnel’s interviews are with established authors such as John Irving, Brett Easton Ellis, T.C. Boyle, Stephen King, Jonathan Franzen, or Joyce Carol Oates. In 2018 he brought Tom Wolfe and Gay Talese together to talk about themselves, taboos in the US, and Donald Trump. They met in Talese’s Upper East Side apartment and Busnel writes that he had expected to find two sages, but instead found two Tontons Flingueurs, or wisecracking gunslingers, referring to characters in a 1963 cult film of the same name. “In this country you can’t be an author and vote to the right,” grumbles Wolfe, while comparing  Trump to a character in a novel. Talese adds, “Trump is the face of America. Certainly not the one we want, but the one we deserve.”

But Busnel also brings in authors with perspectives from other cultural corners, like Patti Smith or Lee Stringer, whose 1998 memoir Grand Central Winter: Stories from the Street chronicled his experience with homelessness New York. Busnel’s choices are oriented toward authors who have been published in French so that America’s readers can buy their books.

“It’s a French tradition to ask writers to chronicle a reign.”

“America speaks to readers about France as well. Some authors say, be careful, this can happen to you,” Busnel said, referring in part to an essay published by Richard Ford, who writes that America is in a “woeful political plight” but that Europeans would do best to worry about what’s going on in Europe. America, writes Ford, is not “dead in the water. Not yet.” In an earlier issue, in an interview with Don DeLillo (followed by an extract of the French edition of Zero K) Busnel asks if Falling Man is a metaphor for America. “If you like,” answers DeLillo. “America is in fact, for me, a man who is falling and who hasn’t yet hit the ground, and thinks he is still flying.”

The magazine’s current issue, on the subject of “new outsiders,” includes a short story by Toni Morrison that has never appeared before in print, illustrated by Shirley Jackson’s grandson, the Paris-based American Miles Hyman, William T. Vollman on the socially excluded in Sacramento, Chris Offutt on Appalachia, and a report from Las Vegas by French author Alice Zeniter.

“It’s a French tradition to ask writers to chronicle a reign,” Busnel said. “Trying to understand is always more important than simply criticizing, and literature is here to explain and interpret the situation. When you refuse to try to understand, it means taking the risk that a disaster can be repeated.”

Will he continue to publish America if Trump is reelected? “I’m not making any predictions, we haven’t yet decided,” he said. “And if he’s impeached, we’ll still finish the four years.”

Olivia Snaije is a Paris-based journalist and editor. She has written several books on Paris, co-edited the photography book Keep Your Eye on the Wall: Palestinian Landscapes, and translated Lamia Ziadé’s Bye Bye Babylon. 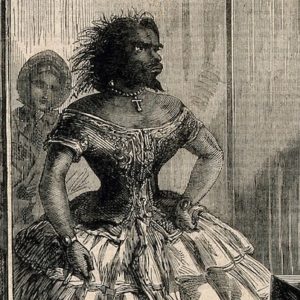 There are no birth, baptism or early records enabling a reconstruction of Julia Pastrana’s formative years, but she was probably...
© LitHub
Back to top
Loading Comments...