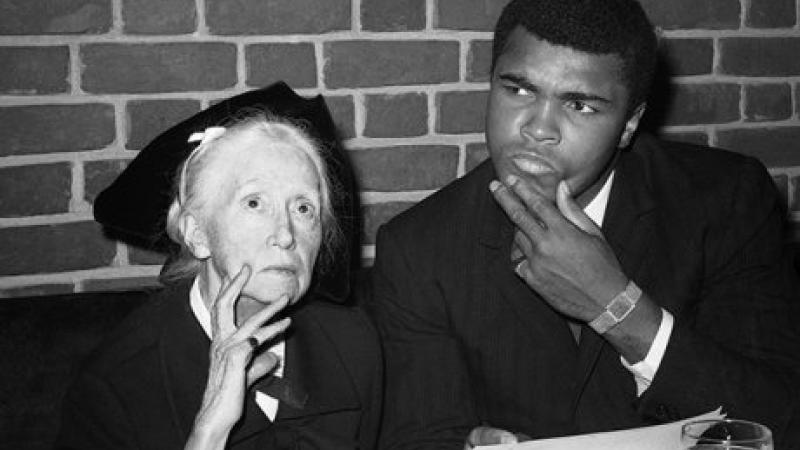 It’s true. The wonderfully unlikely collaboration between the world’s most famous boxer and the “elderly queen mother of American letters”—which was orchestrated by sports n’ literature hybridist extraordinaire George Plimpton—took place in a Manhattan restaurant in the winter of 1967, as a publicity stunt ahead of Ali’s fight with Ernie Tyrell.

As reported by Humanities magazine in the wake of Ali’s death in 2016:

While Ali’s approach to poetry sounded intuitive, Moore was, as the professional wordsmith, more formal and deliberative, crafting jeweled observations on clocks and steeplejacks, a china swan and a paper nautilus. When, at Ali’s urging, the pair worked together on a poem, the result—scribbled on the back of a restaurant menu—proved as unusual as their partnership.

Since today would have been the Moore’s 132nd birthday, here, in full, is (to the best of my knowledge) the first and only collaboration between a a Pulitzer Prize-winning poet and a heavyweight champ:

After we defeat Ernie Terrell
He will get nothing, nothing but hell,
Terrell was big and ugly and tall
But when he fights me he is sure to fall.
If he criticize this poem by me and Miss Moore
To prove he is not the champ she will stop him in four,
He is claiming to be the real heavyweight champ
But when the fight starts he will look like a tramp
He has been talking too much about me and making me sore
After I am through with him he will not be able to challenge Mrs. Moore.