Why Do We Run? On the Art of the Marathon Memoir

From Murakami to the Rara'muri "Running People,"
Stories of Distance and Recovery

Earlier this month, the largest marathon in the world took place along the streets of New York City. Over 52,000 marathoners ran the 26.2 mile course, while thousands more cheered them on from sidewalks and balconies. Even though I’m a runner, like the majority of the crowd, I’m generally stationed on the other side of the race barricade, in awe and bewilderment, wondering: how does anyone develop the mental stamina, let alone physical ability, to train for and complete a marathon?

In pursuit of finding some openings along the barricades that separate the spectators from the marathoners, I picked up a stack of nonfiction narratives by writers whose aims strive toward granting readers a glimpse into the minds of long-distance runners. Even those dedicated to the sport will tell you they are often tempted to skip a run. So, why do it at all, let alone for hours at a time? What’s refreshing and empowering about these books is their reluctance to belabor the physical benefits and instead, through their stories, focus on running’s potential for enhancing mental health.

Katie Arnold’s debut memoir, Running Home, released this year by Random House, takes readers on the trail through the miles of grief and anxiety manifesting itself after her father died of cancer. Marathoners are undeniably remarkable, but the superhuman distances ultrarunners travel is incomprehensible, some as long as 100 miles. In 2018, Katie Arnold scaled elevations of up to 12,600 feet in the Colorado Rockies to become the Leadville Trail 100 Run women’s champion.

“Some days I can no longer tell if running is madness or the clearest kind of sanity,” announces Arnold in her prologue. Among other reasons, she runs to experience that “flow” state, “when cognitive thoughts drop away, creativity surges, and time becomes fluid” and “the mind and body move in harmony.” She runs to confront and to flee from the torrent of unyielding fear and sadness. Her prose rises from the page with the most energy when her descriptions of running erupt with revelations. When training for the Jemez 50K, for example, after she yells out into the wilderness to her father’s spirit, she declares, “I know that if I keep running, I will shed my pain, which is his pain also, and send it out into the trees and the wide New Mexico sky, and I will break through.”

Running Home captures moments of insight Arnold experiences during her long days of training, like “how to want nothing, even for only a moment.” During “a state of prolonged effort,” these moments come for Arnold with “heightened awareness and clarity” which “liberates you from the endless striving of ego.”

Humility, as opposed to a big ego, is a desirable trait in a narrator of first-person nonfiction narratives, at least it is for this reader. Perhaps that’s one of the reasons I find acclaimed fiction writer, Haruki Murakami’s voice so likable, in his memoir, What I Talk About When I Talk About Running (Raymond Carver is “beloved” by Murakami, in case you’re wondering, who adopts his title from Carver’s story collection, What We Talk About When We Talk About Love).

He runs to remember that period of his life, 25 years ago, when he was saved and his friends were not.

Murakami identifies himself as a pretty “mediocre” runner, despite a 25-year running career that includes completing numerous marathons, the Honolulu Triathlon, and the 62-mile ultramarathon in Hokkaido, Japan.

The narrative through-line of his memoir chronicles his preparation for the New York City Marathon, and not so much for a particular time, but rather to see how much he can enjoy experiencing the race. Just as Arnold runs to allow physical sensations to override the tedium of mental preoccupations, when Murakami takes to the road, he doesn’t “think much of anything worth mentioning,” but rather, “I run in a void,” he says. “Or maybe I should put it the other way: in order to acquire a void.” His thoughts are “like clouds in the sky,” existing as “mere guests” that “pass away and vanish… and we merely accept that vast expanse and drink it in.”

Is running a good way to clear your head? My long runs last about two hours. Sometimes after I’m finished and rounding the corner for home, a line from Christopher McDougall comes to mind, “If you don’t have answers to your problems after a four-hour run, you ain’t getting them.”

You can’t talk about long-distance running books without talking about McDougall’s international bestseller, Born to Run: A Hidden Tribe, Superathletes, and the Greatest Race the World Has Never Seen. Originally, McDougall takes off to the Copper Canyons of Mexico, on assignment for Runner’s World magazine, to find the notoriously reclusive Tarahumara Indians to mine their secrets. Their actual name is Rara’muri, which means the Running People. Everything you might assume about a culture of people who can run for 48 hours at a time is antithetical to common understandings of endurance athletes. The Running People don’t “train” or “stretch or warm up.” They “barely eat any protein at all” and drink “enough corn beer in a year to spend every third day of their adult lives either buzzed or recovering.” Their running gear consists of skirts, blouses, and their feet aren’t cushioned by anything except handmade sandals.

McDougall’s contention, as the title suggests, is that running is “really an encoded ancestral necessity,” because “you had to love running, or you wouldn’t live to love anything else,” that “we’re all Running People, as the Tarahumara have always known.”

Dr. Joe Vigil, who’s spent nearly a half century coaching running and researching performance physiology began to come to an “uncomfortable conclusion” upon seeing the Tarahumara run. As a scientist, “not a swami,” Vigil “hated straying into this Buddha-under-the-lotus-tree stuff,” however, “what shone through every moment” Vigil saw the Tarahumara run was, their “magnificent” joy, their “love of life.” Dr. Vigil came to the Copper Canyons to find answers to what might be going on in the Tarahumara’s heads when they ran, but what he encountered instead was their hearts, and the emotion propelling their movements.

While enduring the absence of anything resembling joy, Nita Sweeney informs readers, “My mind was trying to kill me again,” in the opening line of Depression Hates a Moving Target: How Running with My Dog Brought Me Back from the Brink. Self-proclaimed couch potato, Sweeney details her journey from being unable to jog for more than a few minutes to finishing the Columbus Marathon. Even though there are days when she feels so badly about herself she can’t get out of bed, she finds the will to leash her dog and run. Her primary objective is to inspire her readers. Over and over again, Sweeney reminds her audience the lies her mind tells her about what her body is capable of doing. Her running routine, the friends she finds, and the races she completes all contribute to sweating away the doubts and self-loathing from her pores. “If I, an overweight 50-year-old with chronic depression, manic episodes, anxiety, hypochondria, and a wonky ankle could do it, anyone could.”

For Matt Tullis, author of Running with Ghosts: A Memoir of Surviving Childhood Cancer, running brings about the memories he wants to will from of his mind. He doesn’t run to liberate himself from mental activity, but to instigate it, and conjure up memory, because memory is where his deceased companions live. At age 15, he was diagnosed with acute lymphoblastic leukemia. Unlike many of the friends he made during his treatment at Akron Children’s Hospital, Tullis lived. “I cling to my ghosts because they tie me to those days when my life was in the balance.” He runs to remember that period of his life, 25 years ago, when he was saved and his friends were not. Tullis doesn’t believe in life after death, or of the spirits of the dead visiting the living. But when he runs, the people and names he doesn’t want to forget return to his consciousness.

I’ve been running so much lately for reasons I’m only beginning to understand. I desire the solitude, and aspire to experience that elusive flow state. I too, run to acquire a void. Like episodes in life, running can sometimes be lonely and the work of these writers makes for good company. They complicate a familiar subject by exploring its complexities and arrive in a place you’re glad to have traveled.

James M. Chesbro is the author of A Lion in the Snow: Essays on a Father’s Journey Home. His work has appeared in The Writer’s Chronicle, America, The Washington Post, The Millions, and Huff Post, among others. His work is frequently noted in The Best American Essays series.

Spanking, Signing, Reading:
On the Medieval Use of Hands 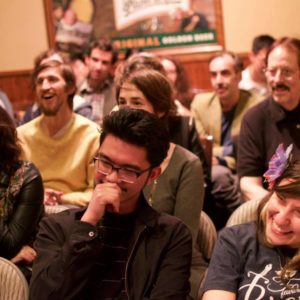 Where is all of the literary love for Queens? It's right here at LIC Reading Series. Join us each week for stories, readings,...
© LitHub
Back to top