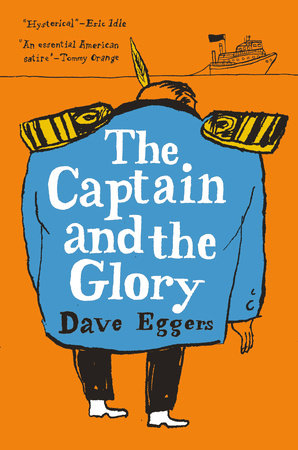 The following is a story from Dave Eggers' The Captain and the Glory. The novel tells the story of a noble ship, the Glory, and the loud, clownish, and foul Captain who steers it to the brink of disaster. Eggers is the author of twelve books, including The Monk of Mokha, The Circle, Heroes of the Frontier, A Hologram for the King, and What Is the What. He is the founder of McSweeney’s and the cofounder of 826 Valencia.

“I like being Captain,” said the man with the yellow feather. He was installed high on the bridge of the Glory, and surveyed the seas with swelling pride. The ship’s passengers had elected him to steer the ship and he was very pleased about it.

The supporters of the new Captain were pleased, too. In fact, they were jubilant. Never in their lifetimes had something like this happened. They felt triumphant and unstoppable and capable of anything. To celebrate the unprecedented victory, they planned a parade to honor the new Captain, to be held later that day. While some supporters were festooning the ship with bunting and balloons, a group of the Captain’s most ardent fans—too excited to be effective decorators—instead found a pair of passengers who had supported the previous captain, and they beat them with clubs and hammers, thinking joyfully of the new Captain with every blow. While they beat their opposition, they got word that the Admiral had just died. So shocked and disappointed was he in the ascendance of the Glory’s worst passenger, that his head froze and his heart burst simultaneously, causing the rest of his body to give up, too. This news, though sad for many, was very satisfying to the most fervent supporters of the man with the yellow feather. It made them feel not just triumphant but liberated, too—free from history, free from all that was staid and stuffy and stale.

And yet there was something that nagged at these supporters of the man with the yellow feather. When the little girl had given her speech, in which she called the new Captain, and by inference his supporters, “most foul,” it had stung. In fact it really hurt.

But then a few of the Captain’s most besotted supporters had an idea. And the idea was to own it. In preparation for the parade, they attached to their clothing thousands of chicken feathers and fashioned beaks from paper plates. On their chests they wrote the words Most Foul and they strutted around the ship, much to the delight of the Captain’s other supporters. The Upskirt Boys considered them daffy and grotesque, but they said nothing, hoping the feathered nonsense would catch on.

It did. In short order, dozens more supporters created their own Most Foul costumes, some of them using the aviary spelling of the word, each of them choosing to dress as whatever bird reflected their personality. And thus, when the parade began, and the Captain was carried on a litter through the crowds, he saw his supporters costumed as hens and roosters, roadrunners and condors, chickadees and cockatoos. They held signs that read, A Captain Most Foul! and they cheered the new captain with abandon. When the Captain came near, they tried to touch him but he recoiled, because he considered them filthy simpletons who carried unnameable and uncountable contagions and germs.

They held signs that read, A Captain Most Foul! and they cheered the new captain with abandon.

Otherwise, though, it was a wonderful parade, and the new Captain wished it could have lasted forever. The idea of standing on the bridge, navigating and steering all day, held less appeal than being cheered by people dressed in handmade avian costumes. At the end of the parade, he was carried to the bridge, where he met the eyes of a dozen crew members there to assist him, none of whom he trusted. He looked at all the screens and levers and buttons, and he whistled. “There sure are a lot of screens and buttons here!”

He whistled again. “This is already more complicated than I thought,” he thought.

He decided he needed some help. Immediately his mind turned to a woman he’d been seeing around the ship. He’d been watching her for as long as he could remember, admiring her comely heart-shaped face and her glorious figure and her hair, which was silky and straight and as yellow as his feather. He often talked to other men about how attractive she was, and how good she smelled, and how much he’d like to date her. He wanted such a gorgeous creature near him always, so he asked her if she would help him steer the ship.

Excerpted from THE CAPTAIN AND THE GLORY: An Entertainment by Dave Eggers. Copyright © 2019 by Dave Eggers. Excerpted by permission of Alfred A. Knopf, a division of Penguin Random House LLC. All rights reserved. No part of this excerpt may be reproduced or reprinted without permission in writing from the publisher. 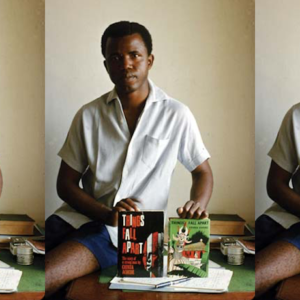 Lit Hub Weekly: November 11 - 15, 2019 “When I read her translations I feel I am responding to paragraphs penned by Turgenev and Tolstoy themselves.”...
© LitHub
Back to top