Alice McDermott on the authority of a great first sentence • How David Foster Wallace used compromise aesthetics to sell Infinite Jest • Yoon Choi on writing immigrant stories in an acquired language • Beowulf Sheehan on learning how to take author photos remotely during the pandemic • Alexey Yurenev documents the COVID quarantine of the Red Army’s dwinding members • Meet the real-life inspiration behind “Mr. Toad” • How avocados became America’s favorite superfood—at the cost of lives in Mexico • A.E. Osworth traces the nerd-to-white-nationalist pipeline • Jo Hamya on the uselessness of internet-driven book culture • The literary afterlife of Elizabeth Barrett Browning • Julie Klam on genealogical brick walls • Stephen Sondheim and James Lapine in conversation • On the cultural history of dreaming • The weirdness of immortalizing exes in fiction • What makes Comic Sans so (literally) memorable • Bill François on the natural treasures of the oyster • Oliver Burkeman on the benefits of nationwide vacation • In defense of the ancient comedian who trolled Aristotle • How the War on Terror became the first “feminist” war • A tiger-seeking trip through the “Wild West” of the USSR • Omri Boehm on the necessary re-imaginings for Israel’s transformation • On the fate of the Himalayan snow leopard in an era of climate change • Patrick Nathan on the fault lines of memory and propaganda • John Lurie recounts the days of sex, drugs, and car-crash jazz • Jennifer C. Nash on the doulas who protect Black mothers • Mansoor Adayfi on the 15 years he spent as Detainee #441 at Guantánamo • When the dismissive editor in your head is your father • What it took to confirm the Big Bang Theory 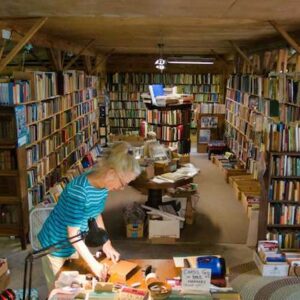 Big news for booksellers, or even aspiring booksellers: The Times Union has reported that Owl Pen Books, a bookstore nestled...
© LitHub
Back to top