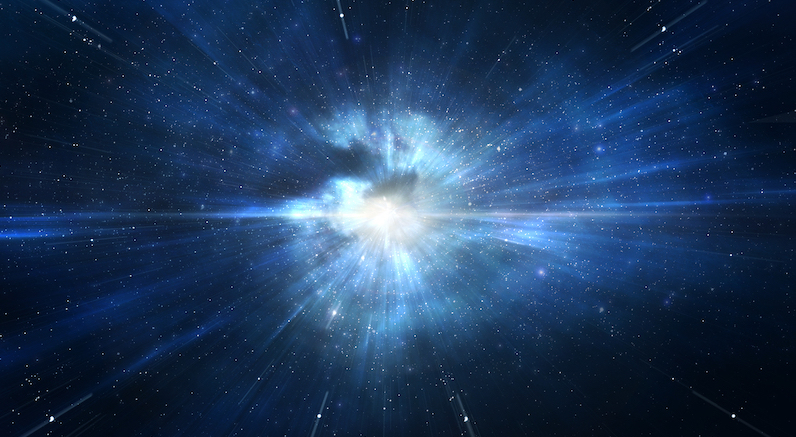 The Great Cosmological Debate of the Twentieth Century

Resolving the great cosmological debate of the mid-20th century was not on their agenda. Yet in 1964, astrophysicists Arno A. Penzias and Robert W. “Bob” Wilson unexpectedly discovered a radio hiss that turned out to be relic radiation from the early universe. Much to their surprise, their finding, after being interpreted and published the following year, helped settle a long-standing argument about time and space. The Big Bang theory postulated the universe had been created with an initial burst of matter and energy, whereas the steady-state theory—its main rival—described no primordial eruption but rather a slow, continuous creation of material that remains ongoing. The Penzias-Wilson discovery of background radiation tipped the scale toward the Big Bang, away from the steady-state.

Though many researchers had contributed to the development of each theory, in the public mind the debate came down to a clash between two extraordinarily brilliant—and charmingly quirky—figures. Since the late 1940s, Russian Ukrainian American physicist George Gamow—a master of exceptional insights and outrageous puns—had carried the banner of the Big Bang (though he didn’t like that expression), and British astrophysicist Fred Hoyle—known for his stubborn persistence, maverick ideas, and passion for long-distance hiking—had tenaciously advocated the steady-state alternative. Their cogent arguments, featured in popular media such as Scientific American and the New York Times, stimulated ample discussion among savvy followers of science about the possibility or impossibility of a single creation moment in the distant past.

Questions about the origins of everything have a venerable history. Has the universe existed forever? Or was there a beginning? Was all matter and energy created slowly over time, in tiny trickles, or all at once, in a single burst? Are the galaxies in space an evenly distributed mixture of young and old, or is their arrangement a kind of timeline for when they were formed and how they developed?

Long before cosmologists took such questions seriously, they were the province of theologians and philosophers. Pick (or be born into) your religion, and that determined your favored cosmogony. Many ancient belief systems, such as Hinduism, Taoism, and the faiths of the Babylonians, the Greeks (in the time of Plato), and most traditional Native American groups, embraced the notion of cosmic cycles. In the life of the universe, nothing ever truly died. The death of one epoch invariably was followed by the birth of a new one.

The Penzias-Wilson discovery of background radiation tipped the scale toward the Big Bang, away from the steady-state theory.

The Abrahamic faiths—Judaism, Christianity, and Islam—on the other hand, advocated a single universal creation at some point in the past. The creation moment represented the dawn of humankind and all mortal things, in stark contrast to the concept of the eternity of God. Like the lives of those fated to grow old, get ill, and die, such a unidirectional, linear time scheme started with a clear, glorious birth.

By the 1920s, and especially in the decades following, thanks to the work of Albert Einstein, Georges Lemaître, Edwin Hubble, and other scientists, the debate as to whether or not the universe had a beginning had shifted to secular grounds. Einstein’s theory of general relativity precisely laid out how mathematical models could trace the development of the universe. Lemaître and others (notably Russian mathematician Alexander Friedmann) used Einstein’s system to provide scientific timelines of cosmic events. Lemaître himself speculated that at a finite time in the past the universe began in an extremely compact, ultra-dense state—something like a giant atom—and grew until it reached its present size.

And Hubble, drawing heavily on the work of astronomers Vesto Slipher, Henrietta Leavitt, and others, used the Hooker telescope at Mount Wilson Observatory in California to demonstrate that the universe is full of galaxies and that all but the closest are receding (moving away) from our galaxy, the Milky Way, at a rate that depends on their distance. Lemaître argued that Hubble’s result supported his prediction of an expanding universe, and Einstein eventually came to agree. Hubble remained agnostic about whether or not the universe was expanding, simply pointing to his galactic recession data as enough of a contribution to the discourse.

Given Hubble’s ambivalence, Einstein’s interest in other topics, and Lemaître’s humble reluctance to trumpet his own ideas (he was a priest as well as a scientist), scientific cosmology was little publicized in the years leading up to and including World War II. There was no real public debate, simply reports in the pages of scholarly journals.

That all changed in the late 1940s, thanks to Gamow and Hoyle. Each, in his own way, was a polymath, a rebel, and a master at science communication. Each was a great fan of Hollywood and its magical theatrics, recognizing the potential of new media (radio and television) to convey extraordinary ideas to wide audiences. It gave them power to sway the public toward their ideas, lending them an impact well beyond the reach of scholarly journals and specialized popular magazines.

Gamow, a nuclear physicist who came to embrace cosmology, took up the mantle of Lemaître’s idea. Along with his student Ralph Alpher and another researcher, Robert “Bob” Herman, he wrote several key papers on the topic of cosmogenesis—the creation of matter in the fiery early moments of the universe. Gamow’s offbeat humor and keen sense of how to elucidate the strange aspects of modern science enlivened his work and made it very palatable to the general public. No solemn clergyman was he; rather, he loved to clown around like a late-night television host. Pranks and practical jokes were his trademark. In numerous popular works, such as his delightful series of books about a bank clerk named Mr. Tompkins who encounters various scientific wonders, his ample wit and zany illustrations made science tons of fun. Gamow’s vivid description of cosmic expansion—from an ultradense point to its current size—in the 1952 book The Creation of the Universe truly brought what came to be known as the Big Bang theory to life. In that and other works, he used a rather silly-sounding word, “ylem,” to describe the primordial ultradense state of the universe. Ylem (a term chosen by Alpher) comes from the obscure medieval Latin term hylem, meaning “matter.”

Gamow and Hoyle were seen as the main opponents in the epic debate between the Big Bang and steady-state theories.

Fred Hoyle, the leading advocate of the steady-state theory, wasn’t quite a showman in the same way as Gamow. His sense of humor was drier, and much less obvious. While Gamow would grab for the silly joke or outlandish pun, Hoyle exercised a darker, more cynical wit. For example, he would jest about cruel circumstances in life, such as the challenges of aging.

Hoyle often used ridicule to disarm his intellectual opponents. He would frequently frame other researchers’ theories in a less-than-flattering manner, in a way that made his own ideas sound much more sensible. In those cerebral sword fights, he virtually never derided the opposing scientists themselves, many of whom, such as Lemaître, he deeply admired. (The major exception was his Cambridge colleague Martin Ryle, whom he disliked for his volatile personality and arrogant, disrespectful attitude, as well as for his rival ideas.) Rather, in the spirit of a college debate team champion, he would respect his opponents while finding weaknesses in their arguments. Hoyle’s clever critiques, like Gamow’s buffoonery, made for great press.

With his dagger-sharp wit, Hoyle deemed patently ridiculous the idea that all of the material in space was created at once sometime in the past. He saw it as a cheap trick—a sleight of hand unbecoming of serious scientists. He coined the term “Big Bang” as a mocking epithet during a BBC science radio program first broadcast on March 28, 1949: “These theories were based on the hypothesis that all the matter in the universe was created in one big bang at a particular time in the remote past,” he said. “It now turns out that in some respect or another all such theories are in conflict with the observational requirements. Investigators of this problem are like a party of mountaineers attempting an unclimbed peak.”

Hoyle’s final remark, about mountain climbing, was even harsher than it sounded because he prided himself as an expert hiker and climber. By the end of his life, he was delighted to have “bagged” all the Munros, the highest mountains in Scotland: 282 peaks all over 3,000 feet. So, in effect, he was saying, “Leave cosmology to the experts, or study harder and become a real one yourself.”

Hoyle maintained a steady presence on British radio as the leading critic of the “Big Bang,” including in a five-part series, “The Nature of the Universe,” that was published in book form in 1950. He also became a prolific writer of popular science and science fiction. Like Gamow, he became known for his popularization of science in addition to his scientific accomplishments themselves.

Gamow never liked the term Big Bang, because he considered the birth of the universe to be neither big (the universe was tiny at that point) nor a bang (the universe never really exploded; space just grew). Nevertheless, the name stuck.

Likely because of the strength of their personalities and their wide-spread media presence, Gamow and Hoyle were seen as the main opponents in the epic debate between the Big Bang and steady-state theories. Never mind all the other major contributors, from Friedmann and Lemaître to Alpher and Herman, on the Big Bang side, and Hermann Bondi and Thomas Gold, co-proposers along with Hoyle, on the steady-state side. Although highly informed readers knew of all the others, those following the story in the popular press, particularly in the United States, focused mainly on the two most prominent. During an oral history interview conducted by Martin Harwit, Alpher agreed that the contest “was usually put in the context of Hoyle versus Gamow.”

From the early 1950s to the mid-1960s, enthusiasts of popular science had fun taking sides in the great cosmological debate. Whereas Gamow and Hoyle were resolutely secular, focusing only on the science, some members of the public tied the ideas to matters of faith. As in many scientific disputes, until all of the facts come in, personal, philosophical, and religious preferences often prevail. That’s what made the Big Bang versus steady-state battle so compelling. In the former, time and the universe have a definite beginning. In the latter, time and the universe are eternal. Consequently, many religious people saw in the Big Bang evidence of divine creation. People who would rather have no need for a creator generally gravitated toward steady-state. It was a choice based on belief rather than evidence—a parlor wager that made sense only before the Penzias-Wilson discovery of the cosmic radio hiss would tip the scale. 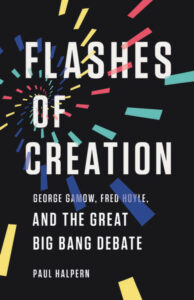 Paul Halpern is a professor of physics at the University of the Sciences in Philadelphia and the author of sixteen popular science books, including The Quantum Labyrinth, Einstein’s Dice and Schrodinger’s Cat, and Synchronicity. He is the recipient of a Guggenheim Fellowship and is a Fellow of the American Physical Society. He lives near Philadelphia, Pennsylvania. 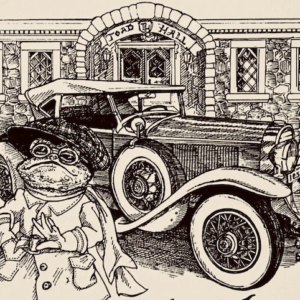 Bertha Benz’s road trip in 1888 had been witnessed by bemused onlookers numbering a few dozen at most. Huge crowds turned...
© LitHub
Back to top
Loading Comments...