Because every day is Earth Day: 365 books to start your climate change library (the classics, the science, fiction and poetry, politics, pathologies, philosophy) · Bill McKibben on our new climate reality • Mireille Juchau’s notes toward a new Golden Record of humanity • Andrew Ervin on Robert Macfarlane, Sami folktales, and what we risk losing in the Arctic • A professional beekeeper shares some tips for preventing the insect apocalypse • Five climate change audiobooks to listen to this spring • Read Walt Whitman’s thoughts on sex • Isabella Hammad on six great books of correspondence • On editing Oliver Sacks after he was gone • Can you save a dying Italian town with the art of storytelling? • How John Hersey, author of Hiroshima, revealed the horrors of the atomic bomb to the US • A wunderkind reflects on rejection and persistence • On the ongoing obsession with Shakespeare’s true identity, and his afterlife agnosticism •  Ian McEwan on Bach, Philip Roth and living an episodic life • Amy Tan reflects on 30 years since The Joy Luck Club • Going deep into the J.P. Donleavy archives • Wandering the Arctic Circle (on Google Maps) for a novel • Moving back to West Virginia, in fiction and in life: Mesha Maren returns home in Sugar Run • The improbable history of baseball’s weirdest pitch • Saying goodbye to a beloved local bookstore • The lessons of recording a half-century’s worth of reading • Reading Robinson Crusoe, 300 years on • A profile of Deborah Landau • Dreaming of being a writer when you’ve never actually met one • Gabrielle Bellot on the virtuosic shame of Giovanni’s Room • On early 20th-century America’s unhealthy fixation with “hygiene” • Rules for writing. . . an entire novel in ten days •  Amanda Leduc on disability, Captain Marvel, and fantasies of the perfectable body • Emily Oster talks to Pamela Druckerman about her “parenting book for economists” • William Faulkner’s grudging, misogynistic fan letter to Anita Loos • O

The Essential Ian McEwan: a reading list for the most adapted man in literary fiction • Mueller misery, false prophets, tedious sex, and more of the Book Reviews You Need to Read This Week • Lebanese novelist Hoda Barakat has won the 2019 International Prize for Arabic Fiction • This week in Secrets of the Book Critics: Amy Brady on Rita Indiana, Rachel Carson, and the literature of climate change • New titles from Ian McEwan, Oliver Sacks, and Louis Bayard all feature among the Best Reviewed Books of the Week

Congrats to the 2019 Edgar Winners! • Edgar Award nominees weigh in on the state of the genre, parts 1 and 2  •  Reed Farrel Coleman on how TV series Bosch captured the stark poetry of Michael Connelly’s noir opus • Bridget Collins on the power of stories, to help and to harm •  Adi Tantimedh on the art of the crime comedy • Paul Abbott on the first 10 years of Ed McBain’s 87th Precinct series • Next up in Crime and the City: Kingston, Jamaica • Sally Hepworth rounds up 8 novels featuring dysfunctional families • Lisa Levy scours the last two decades of crime fiction in search of The Great Hipster Mystery • A beginner’s guide to locked room mysteries and impossible crimes, from Gigi Pandian

As Sri Lanka Goes So Goes the World 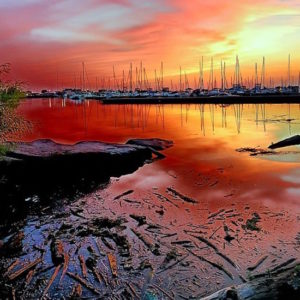 And what now of dreaming? We’ve failed the planet has published our failures. Our crimes are perpetual methane and sweltering,...
© LitHub
Back to top