"All creative acts demand a fruitful pause at certain points."

Ian McEwan’s latest novel, Machines Like Me, is out now from Doubleday.

What time of day do you write?
The morning. My philosopher friend Galen Strawson divides humanity into those who feel they are living in a constantly unfolding narrative, a life story that informs our every moment, and those who existence is discontinuous. I now understand that I belong in this latter group, even while I’ve often persuaded myself I was in the first. I’ve sat on literary panels and said things like, “We are all story-makers about our lives.” At last I understand that I don’t really believe that. I was simply trying to be obliging, trying to join in. Now I can relax. I belong with those whose lives are lived in discrete patches.

We can, of course, remember our childhoods, our first loves, our failures and joys when asked to, but almost all of our daily experience is disconnected from any awareness of the past. We also acknowledge that most of that past is lost to us forever. We, the non-narrativists, or episodists, wake in the mornings and we begin anew. I am my own blank sheet. As the day wears on, familiar concerns—domestic, professional, political, crowd in. The thing about that waiting desk is that you must turn up—and get there before the blank sheet that is you turns dog-eared.

How do you tackle writer’s block?
The first step is to rename it. Call it hesitation and it will cease to be oppressive and become instead a part of the process—an essential part. All creative acts demand a fruitful pause at certain points. A constant flow of invention, week on week, is rare. So: walk away, cook dinner. Or remain at the desk, abandon the keyboard and take up a pen (black ink is best) return to the notebook that is the essential companion to the screen, and write this word: contains. At speed, write down, impulsively, everything that next section or chapter must or might contain. Then cook dinner.

Which non-literary piece of culture—film, TV show, painting, song—could you not imagine your life without?
Since the age of 16, my constant resource has been the music of Bach. Piano first, then all the rest. Like all music, it is as abstract as literature is specific, but Bach’s inventions are more so—like the processes of thought before language, deeply human without saying anything at all. In his music I think I confront the most naked demonstration of genius. Wrapped inside the beauty is a form of merriness and a joyful pulse. The same pieces that thrilled me in my teens—the Goldberg Variations, the Well-tempered Clavier—thrill me now.

What’s the best writing advice you’ve ever received?
When I was living in London at the start of my career in the mid-1970s, I became friends with Philip Roth, who took an avuncular interest in my work. Where many others thought my writing was wild and weird, he thought I wasn’t being wild enough. He once came to my apartment and spread the typescript of my first novel (The Cement Garden) over the floor. He was on his hands and knees, moving the chapters around. What he wanted was for me to be bolder, crazier. He said, “You have to write as though your parents are dead.” My parents were alive. I took that advice.

What was the first book you fell in love with?
At the age of 13, I was sitting in my school library reading The Go-Between by L.P. Hartley. The year is 1900, summer vacation. A boy, Leo, of my age is staying with a school friend in a grand house. There’s a heatwave. Leo becomes the intermediary, a “postman” in a secret love affair. The temperature keeps rising. Will it reach 100 degrees? A copy of the satirical magazine Punch arrives. On the cover, Punch is moping his brow with a handkerchief. At this point, as if in a trance, I crossed the library to where the old leather-bound copies of Punch were stored. I took down the volume for 1900 and turned to July. And there he was, Punch mopping his brow! It was a transfiguring moment for me. The fiction was true. Reality and invention could merge. Perhaps it was then I formed a deeply buried resolve to become a writer. Many years later, I wrote a novel, Atonement, which was in part a tribute, a grateful bow to The Go-Between.

A Poem by Robin Coste Lewis 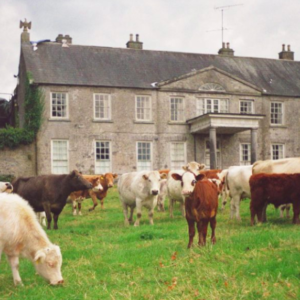