What Should We Send Into Space as a New Record of Humanity?

Nearly 50 Years After the First Golden Record, Mireille Juchau Wonders About the Next

When the Golden Records were shot into space aboard the Voyager missions in 1977, the vision they carried of planet earth was hokily upbeat. There would be no images of war in this time capsule, insisted project leader Carl Sagan—these might appear threatening to extra-terrestrials, the Records’ intended recipients. Instead, Sagan and his team assembled the sounds of wind, volcanoes, waves, thunder, birds, frogs and wild dogs. They gathered 115 images, including a woman breastfeeding, an x-ray of a hand, photos of a seashore, sand dunes, Monument Valley, fallen leaves, a tree with daffodils, a flying insect with flowers.

Considering earth’s current moment, with its insect apocalypse and three quarters of its species facing imminent collapse, with its rising seas and catastrophic weather phenomena, the sound of rain and birds recorded 42 years ago evokes the misty sentiment usually reserved for shots of a lost loved one. Yet when this arcadian snapshot of earth was propelled into the stratosphere, we already knew, from Rachel Carson’s work in the 1960s that noxious pesticides could be found nearly everywhere on our planet, including in the fat of Arctic birds.

Sagan’s time capsule now exists as a record not of what we had but of what we thought we had: abundance, human ingenuity, unspoiled nature. Sagan did not advertise the fact that earth was already in decline, even then. He preferred to spruik it, like a Destination Wedding designed to entice guests from friendship’s outermost circles. You can’t be sure if these distant folk will show up or behave well when they do, but the possibility has a chancy, heady appeal.

Should aliens ever intercept these records, should they figure out how to play them, they’ll hear greetings from 55 former UN representatives. Hello in Aramaic and Sinhalese, Zdrávstvuyte! Privétstvuyu Vas! Mixed in with these salutations, whale songs.

“I’ll leave it to the extraterrestrials,” said the project’s sound recordist Timothy Ferris, “to decide which species they prefer.”

Though Sagan was at pains to transmit a friendly message, he did include, along with other classical tracks and traditional songs, the second act of Mozart’s The Magic Flute titled Hell’s Vengeance Boils in My Heart. He also permitted the brainscan of creative director Anne Druyan as she turned her thoughts to “the violence and poverty that make this planet hell for so many.”

Some months ago I was invited with a group of Sydney novelists and screenwriters to listen to scientists at the Australian Film and Television School, an event designed to inspire the creation of new television drama about climate change. In a series of brief talks the scientists outlined their work in fields that touched on our current climate crisis. There were statistic-heavy slides on solar panel production. There was moving footage of the artificial nests of rammed earth and concrete being helicoptered to a Tasmanian island to assist the vulnerable shy albatross. There was a quiet personal story of slogging through a heatwave while heavily pregnant and a projected future in which the wealthy will schedule their births for the cooler months while the poor line up in the heat for scarce hospital beds.

Some talks included clips from Hollywood disaster movies—colossal waves engulfing cities, towering infernos, hordes of people fleeing. At the day’s end we were asked to dream up pitches for Anthropocene-themed television, drama that might consciousness raise about climate change or shift careless audience behaviors. During a later meeting on this project I was asked, what message would my work ultimately send?

It seemed to me that day that the climate change drama was unfolding in less spectacular forms—right before me in the film school theatre—no special FX required.

No matter how intricately detailed, or how much its sturm und drang yanks the heartstrings, the Hollywood disaster flick has always seemed pure escapism to me, not least because its imperiled populations are nearly always Western and white while the numbers of actual dead increase in weather ravaged places like Haiti and Indonesia. Horror-story narratives, says psychologist Renee Lertzman, author of Environmental Melancholia, place people outside the action in the “politically neutralizing” position of “titillated, excited, fearful spectators.”

It seemed to me that day that the climate change drama was unfolding in less spectacular forms—right before me in the film school theatre—no special FX required. In their frustration and passion for their fields, in their years of tireless work in a hostile political and global climate, it was the scientists who embodied all the pathos, hope and grief that characterize our times. More than this, they’d each undergone a transformation. In order to fully convey a future bearing down but not quite upon us, the scientists were forced to move beyond familiar territory of verifiable, rational fact. Instead, like seers, they delivered auguries of disasters yet to come. Despite their despair and frustration, their untiring collective labor was a communal message of hope.

As I listened to their predictions, I thought of naturalist Aldo Leopold’s observation that to receive an ecological education “is to live alone in a world of wounds.” Then I recalled Druyan who’d contemplated, along with violence and war, “the wonder of love” as her brain was scanned. She’d fallen for Sagan during the project.

The word disaster is linked to the stars. Its root comes from the Italian disastro “ill-starred,” from astro “star, planet” and the unfavorable alignment of these was once understood as the cause of earth’s catastrophes. Today the meaning of disaster has fallen heavily to earth, where we

are the geological agents driving planetary catastrophe. Our current disaster is a decline which no one but our earthly selves are responsible for. How might we communicate what we’ve done to our planet to those who have preserved, or more thoroughly ruined theirs?

For all their celebratory, magisterial breadth, the Golden Records did sound one apocalyptic note. It can be found in President Carter’s greeting: “We are attempting to survive our time, so we may live into yours.’

There was also a recording of Sagan’s laughter.

As far as I know, these tracks were not adjacent.

As each week I read fresh reports of our world’s decline, I’ve begun to imagine a new Golden Record. What would such a global mixtape contain if it was shot into space today? The longer I consider it, the less possible it seems to capture the simultaneous unfolding of beauty and ruin in our present moment. Someone tweets a photo from a northern zone, their front door cast, like something in gleaming marble, in a solid wall of record-breaking snowfall. Someone else uploads aerial shots of the Tasmanian wilderness burning, remarking on their eerie beauty. I can feel neither delight or horror; every image of weather, no matter how innocuous—rain on a flower, sun on a face—produces in me a discomfiting mix of panic and numb incapacitation. I think of Blanchot writing about the scattershot effects of the disaster: “We do not repel the earth, to which… we belong… we do not make of it a refuge, or even dwelling upon it a beautiful obligation.”

What follows are my early notes towards a new golden record:

A catalogue of every extinct creature, not as they once appeared in the wild but as we encounter them today: Martha, the passenger pigeon stuffed and mounted in the Smithsonian; the Tasmanian tiger skin in its coffin-like drawer in the National Museum of Australia; recent night-footage claiming to show the thylacine stepping through a deep green wilderness, but capturing something else on the brink of extinction—our wonder and hope.

Artist Anais Tondeur’s haunting photograms of radiated vegetation at Chernobyl, which recall the shadows of humans burned on nearby structures during Hiroshima, disasters about which no survivor can fully testify. In Tondeur’s photograms the natural world bears witness to a landscape that can no longer sustain human life, these are visions of a possible future earth.

Olafur Eliasson’s The Weather Project—an enormous artificial sun rising in the Tate Gallery. Attempting to recapture lost wonder at natural phenomena, Eliasson also intimates the death of our brightest star, just as the artist collective Random International anticipates the end of rain. When their Rain Room opened in Los Angeles, a historic drought had made water more conceptual than real. Inside the Room visitors pass through a beaded curtain of drops and never get wet. It looks and acts and sounds like water, this inside weather, in desiccating Southern California. I watch a clip of the installation online with my young son. As a figure enters the downpour, hands out in a wondering pose, he asks me only one thing, “can you feel it?”

A field recording of a Maori man mimicking the sound of the huia, now extinct due to deforestation and introduced predators. The recording conveys only the memory of this glossy green and black bird, a call passed through generations of Maori people. It was made by a white man in the middle of the 20th century. It is, writes biologist Julianne Lutz Warren “a soundtrack of the sacred voices of extinct birds echoing in that of a dead man echoing out of a machine echoing through the world of today.” A document of the ruin ushered in by colonialism, the apocalypse that nearly every native population has already undergone.

A list of substances flowing through our bodies and waterways—industrial byproducts, fluorocarbons, pharmaceuticals, microplastics, estrogen, PCBs. Like the black carbon from burning fossil fuel which can now be found in cores of glacial ice, our bodies too have become archives.

A map of earth showing the 77 percent of land and 87 percent of oceans altered by human intervention.

A description of the white phone booth in the Japanese town of Otsuchi where survivors of the 2011 tsunami place calls to commune with their dead, a phone known as Kaze no denwa, or phone of the wind. “If you’re out there,” says one man into the receiver, “please listen to me.”

“I tried,” says a woman after attempting a call, “but words are not enough.”

A definition of the word apocalypse, including its original meaning: uncovering, a lifting of the veil, a disclosure of something hidden from most, a coming to clarity.

Mireille Juchau is an Australian novelist, essayist and critic. Her third novel, The World Without Us, was published in 2016 and won the Victorian Premier’s Literary Award. Her work has appeared in the Times Literary Supplement, Tablet, Brick Magazine, The Monthly and is forthcoming in The New Yorker. She has held residencies at the Charles Perkins Centre, University of Sydney and the University of Technology, Sydney.

It's Not Coming, It's Here: Bill McKibben on Our New Climate Reality 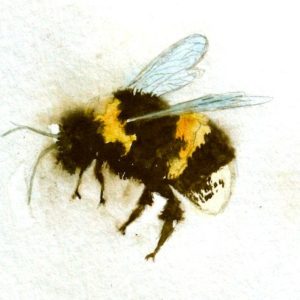 Elementary school usually held my attention until about April, when I’d start getting fidgety. The new flowers were beckoning...
© LitHub
Back to top