A Writer's Life, Reflected in His Art

The painter who became the author and playwright J.P. Donleavy was born this day, April 23, 1926. He died September 11, 2017, aged 91. But, he lives on in his first novel and new titles to emerge from his archive.

On a summer day 1951 Brendan Behan visited J. P. Donleavy at his Kilcoole cottage in Wicklow, Ireland, but found no one home. Thirsty and hungry, Behan broke in, helped himself to whiskey and food, and began reading and editing a stack of papers on a table, the first 120 pages of what became The Ginger Man. When they next met, Behan told Donleavy: “This book of yours is going to go around the world and beat the bejesus out of the Bible.”

Behan got the first half right.

Donleavy was fictionalizing what he observed and experienced in the pubs, streets and salons of late 1940s bohemian Dublin as an American attending Trinity College Dublin. His work-in-progress focused on the adventures, calamities and escapes of the indomitable charmer Sebastian Dangerfield, who lacks ambition except to have a good time and more pints of Guinness while keeping responsibilities at bay. Ostensibly a law student, with a wife and child, Dangerfield envisions a future of riches filing writs, but pawns his law books. He keeps sailing his dreamboats through the rough seas of reality without foundering somehow. Despite a disputed 1955 publication by The Olympia Press, Paris, followed by bans and battles, the novel would go on to be published by mainstream U.S. and U.K. houses and remains in print in English, and has been translated into two dozen languages. Worldwide sales have topped 45 million. 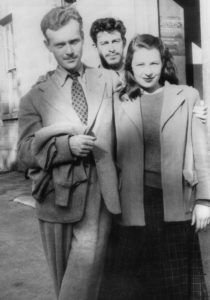 J.P. Donleavy peaks over the shoulders of newlyweds Gainor and Petra Crist, in Front Square, Trinity College Dublin, where they were students in the late 1940s. Courtesy J.P. Donleavy archive.

James Patrick Donleavy was a New Yorker, the middle child of Irish immigrants. He attended Catholic schools. He graduated from Manhattan Prep, having been “chucked out”, as he put it, of Fordham Prep after founding a secret society of which he made himself Supreme Brother Master and held the society’s first and last meeting at a saloon near campus. After high school, Donleavy enlisted in the U.S. Navy the summer of 1944, remaining Stateside in training. With the war’s end and the G.I. Bill, after failing to get into any Ivy League school, Donleavy headed off to Trinity for the fall 1946 term. There he encountered other military veterans availing of the G.I. Bill’s educational benefits, including handsome and ginger-haired Gainor

Steven Crist, a Navy veteran who spent a year at Dartmouth, and the brilliant, blunt and funny Arthur Kenneth Donoghue who, having only one eye as a result of a childhood accident, was nevertheless drafted into the Army, but later discharged because of his impaired vision. He returned to Harvard, studying Greek and Latin. They and other veterans at Trinity met local veterans of a different sort, like Behan, out of the IRA. 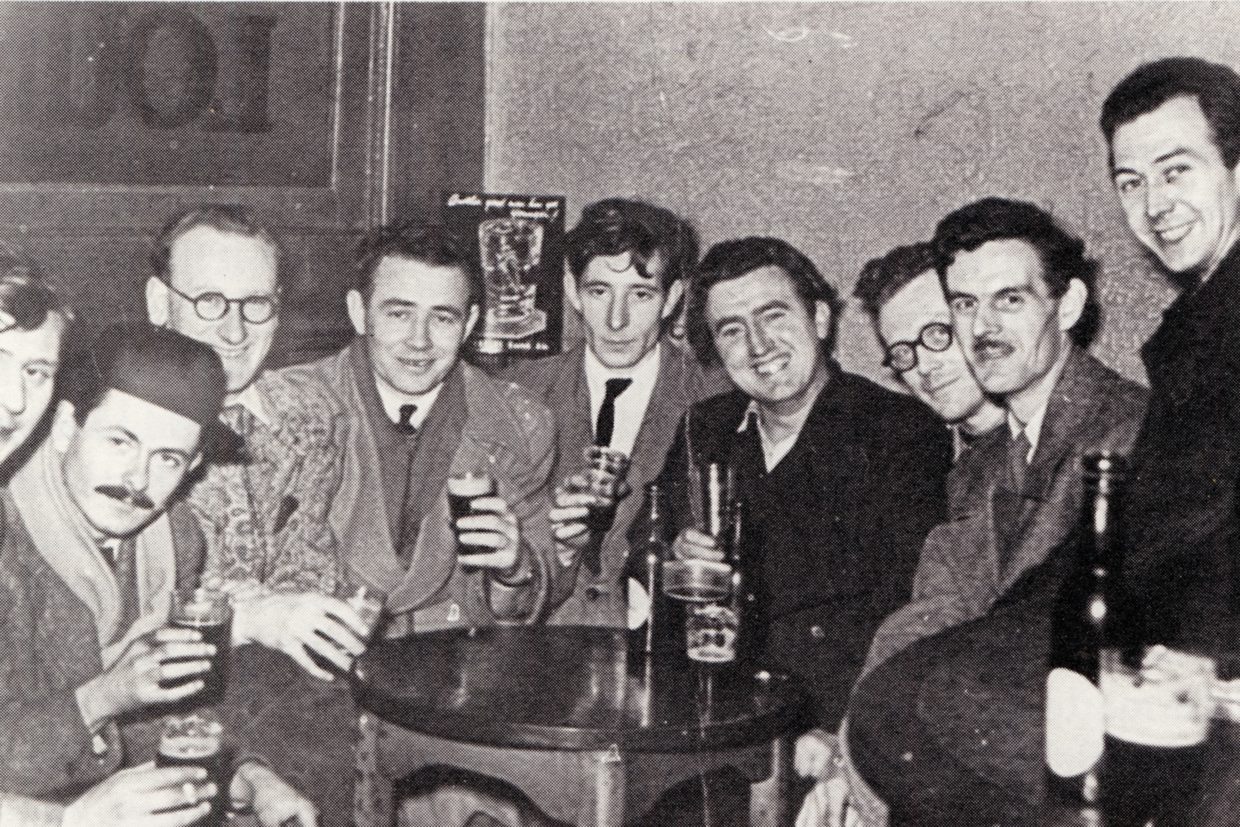 Donleavy was a lackadaisical student of microbiology and instead pursued artistic interests—painting and writing. Having married in his third year, he quit Trinity, hoping to support his wife Valerie and himself on painting sales. He abandoned that plan after a London art dealer praised his paintings but rejected them because he wasn’t famous. “I announced to the street that, goddamnit, seeing as I was contemplating it anyway, I would write a book that no one could stop and would make my name known in every nook and cranny all over the world.”

The novel, begun at Kilcoole, was continued in America during a year-long stay, after which Donleavy, his wife and son settled in London where he pressed on. A daughter was born in 1955.

Last year, I edited The Ginger Man Letters, a collection of 220 letters and cards between Donleavy and Trinity friends Crist and Donoghue, who inspired in part The Ginger Man main characters Sebastian Dangerfield and Kenneth O’Keefe respectively. There are also elements of Donleavy in both characters. The Ginger Man Letters, published on the first anniversary of Donleavy’s death by The Lilliput Press, Dublin, is, in effect, Donleavy’s 27th book and takes readers into the complicated composition, problematic publication and improbable afterlife of The Ginger Man. The letters combine to tell a true story that reads like Donleavy fiction—often funny, sometimes serious, at times brawling and always revealing of these colorful individuals, the special time and place they shared and what happened as they ventured into the wider world. Popping up in the letters and notes are some of the biggest names of their day. 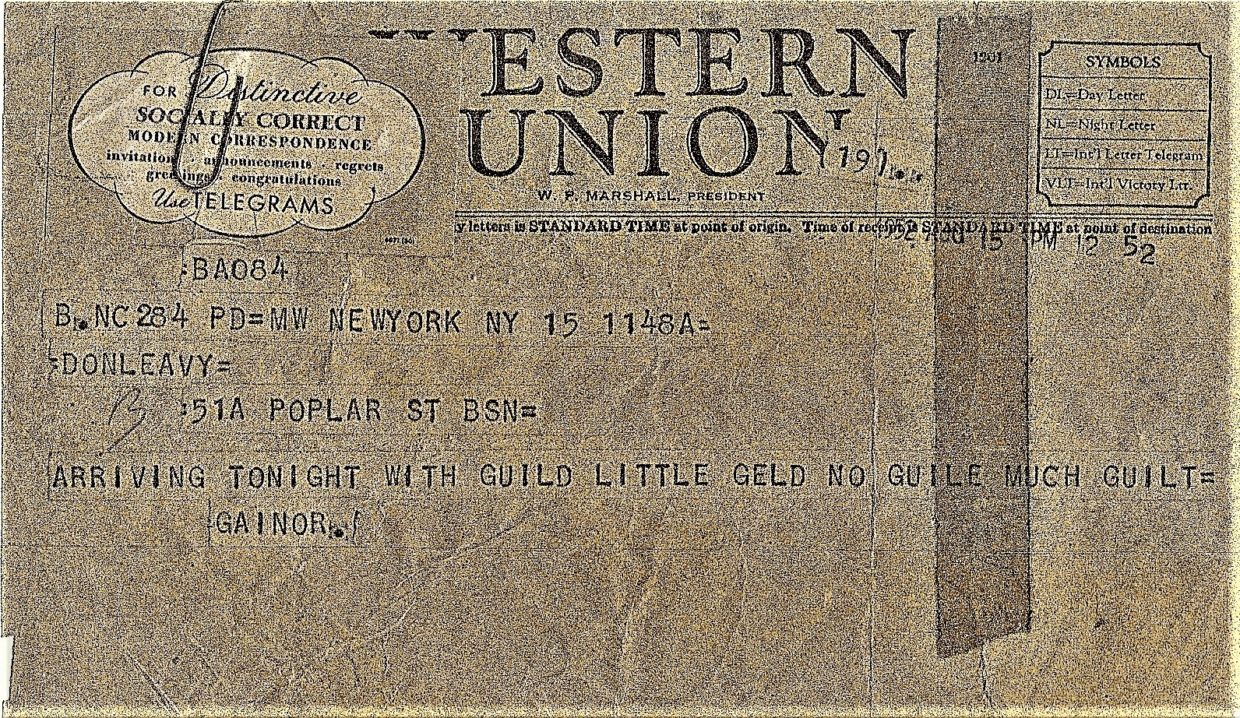 Crist came to the US despite Donleavy’s discouragement, finding a job with American Express in lower Manhattan. One weekend he and Trinity pal Ray Guild went to Boston to see Donleavy. Crist announced their imminent arrival and his financial straits via telegram. Courtesy J.P. Donleavy archive.

I came to edit The Ginger Man Letters by a circuitous route. I am a Donleavy fan and collector. While he lived in Ireland since 1969, we met in Washington, D.C. when he was on a 1990 book tour. I was then a newspaper reporter and wangled an assignment to interview my favorite author. Instead of a scheduled 45-minute interview, we spent the entire day together. As I was taking my leave, Donleavy said: “If you’re ever in Ireland, you must come visit.” I did a few years later when in Ireland to run the Dublin Marathon. Afterwards I hopped the train to Mullingar and a two-day stay at his home, Levington Park, built circa 1742, overlooking Lough Owel. He was then divorced from his second wife. He showed me The Ginger Man manuscript with Behan’s edits. That was the first of many 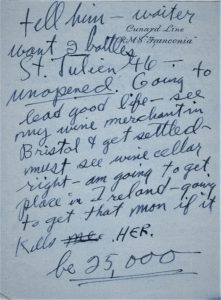 Donleavy and Crist left the U.S. in February 1953, sailing to England aboard the RMS Franconia. Rejected by Scribner’s, a discouraged Donleavy worked on his manuscript. Not in the mood to socialize or chat, he instead wrote notes to Crist, like this one. Courtesy J.P. Donleavy archive.

During a 2005 stay, I organized Donleavy’s library and papers (manuscripts, personal and publishing correspondence, legal files related to various battles). I read the correspondence with Crist and Donoghue, urging Donleavy to gather the letters into a book. He was interested and occasionally re-read the letters, recalling old friends and happy times. While Donleavy never pursued the correspondence collection, his son Philip Donleavy gave me permission to proceed with The Ginger Man Letters.

And there’s more to come from Donleavy’s files. The Lilliput Press is readying for publication the last novel Donleavy completed, A Letter Marked Personal. There is also a collection of short pieces in the offing. Meanwhile Philip and sister Karen hold the film rights to their father’s books. 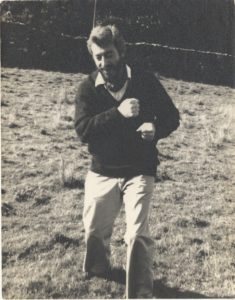 Despite rejections, problems with the 1955 first edition and controversy over the 1959 stage adaptation of The Ginger Man, Donleavy rose to every challenge. Tony Walton, co-producer of the 1959 London triumph and Dublin disaster, captured his friend’s fighting spirit in this photo taken on the Isle of Man. Donleavy was, in fact, a skilled amateur boxer and never backed down from a challenge. Photograph Tony Walton. 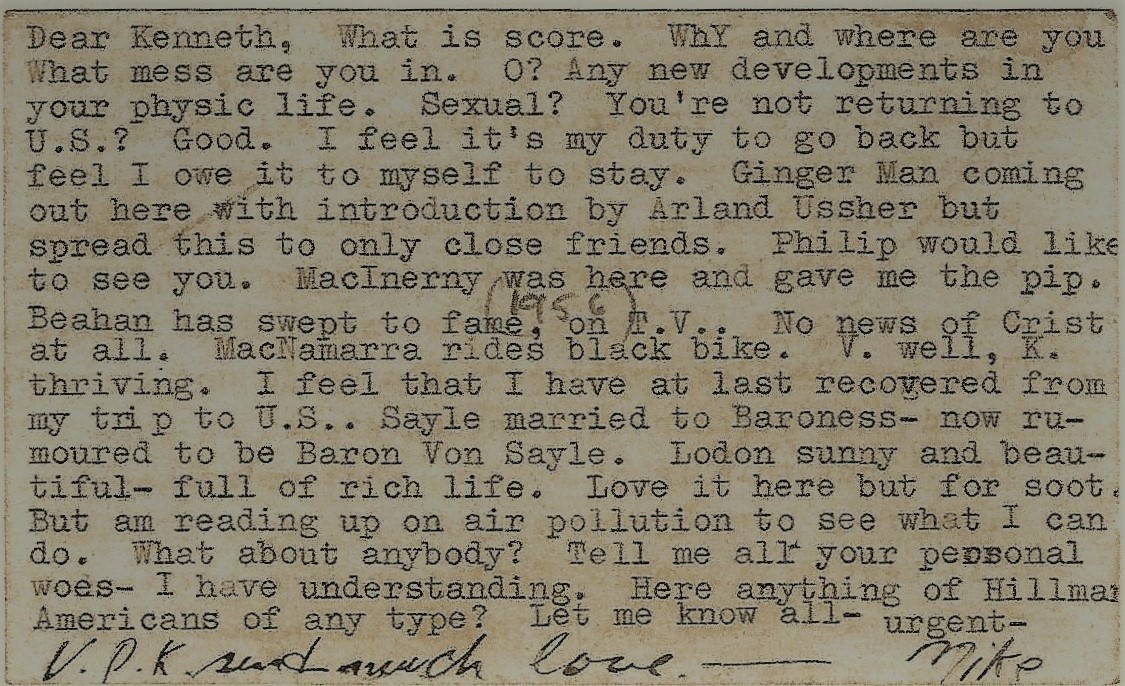 Mainstream London publisher Neville Spearman Ltd published The Ginger Man in a trimmed edition in late 1956, which saved the book and author, getting the novel reviewed and into leading bookstores, which Olympia could never accomplish. Irish scholar and critic Arland Ussher, who praised Donleavy’s paintings in a 1950 letter to The Irish Times, wrote a favorable introduction for the Spearman edition. Courtesy J.P. Donleavy archive. 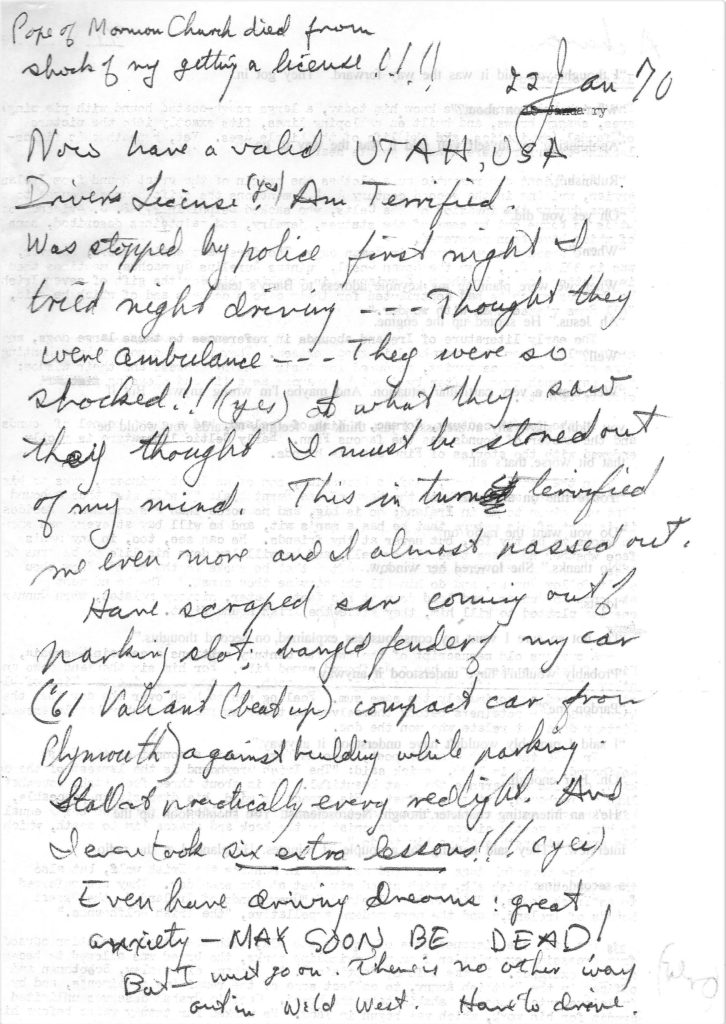 Despite having impaired vision, Donoghue finally got a driver’s license—in Utah where he was working in 1970, translating foreign scientific journals at the University of Utah School of Medicine. He would later work as the secretary to the secretary of an advisory board to an Elko County commission. Courtesy J.P. Donleavy archive. 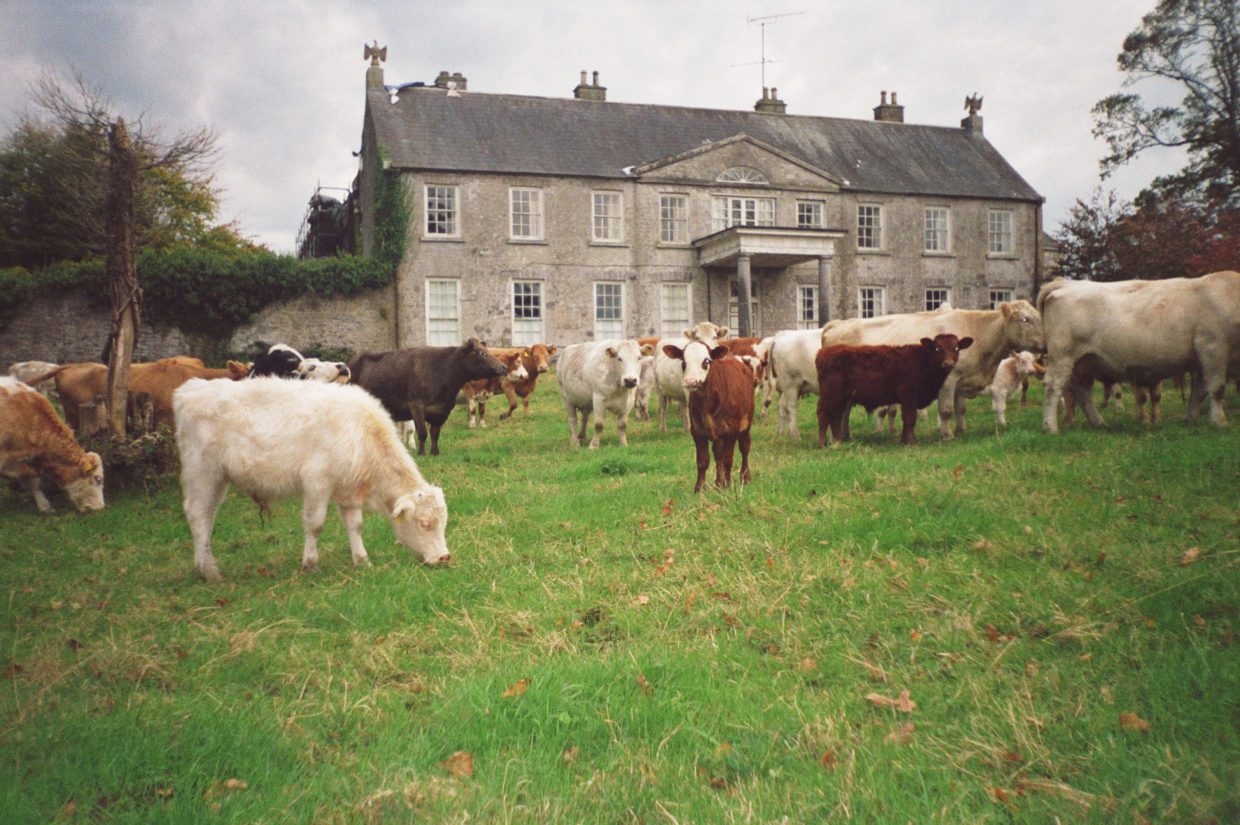 Donleavy moved to Ireland in 1969, where he lived tax-free under the Artists’ Tax Exemption scheme. Since 1972 he lived here, Levington Park where he raised beef cattle, on 180 acres, overlooking Lough Owel. In his lifetime, he would see published over two dozen books, four plays staged and a few dozen exhibitions of his art mounted. Photo Bill Dunn.

Feature image: After a gallery praised but rejected his paintings because he wasn’t famous, Donleavy vowed to write a book “no one could stop”. And he did, starting the manuscript that would become The Ginger Man in 1951 at his Kilcoole cottage, Wicklow. Courtesy J.P. Donleavy archive. 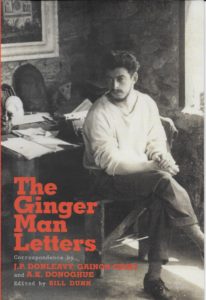 The Ginger Man Letters is out now from The Lilliput Press.

Bill Dunn (bilge449@yahoo.com) is the author of several books, including two on lighthouses. He lives at the New Jersey shore, two blocks from a lighthouse where he is a docent and the historian. 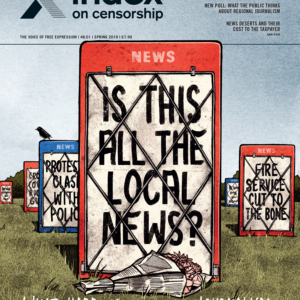 I am the most hated person on our local internet. Most people must have seen my mug by now. Crossed out or smeared with blood,...
© LitHub
Back to top
Loading Comments...