On Growing Up in the Literary Backwaters of Missouri

When I was ten, I felt strongly that my fifth-grade teacher failed to grasp her luck in life. I revered the tiny, lovely Mrs. Hobbs for all the reasons tweens worship educators who see through their diffidence. But my jealousy was based solely on the family she’d married into: her brother-in-law was Will Hobbs, author of Jackie’s Wild Seattle.

My closest relatives were studied in the sciences, real estate, accounting, military, and law. When I told my parents—one an emergency-room physician, the other an obstetrician/gynecologist—that I wanted to be a writer, they’d grinned with oblivious encouragement. They had no idea what being a writer entailed. It sounded creative and glamorous. We made a silent pact to figure it out together.

But I had never met a published author. I grew up in Columbia, Missouri, where, as far as I knew, writers did not live. If they did, they were sucked in by one of three college campuses in town and spat back out with a degree or a new line on their

résumé, and perhaps I’d pass them on I-70 while they hightailed it the hell out of Missouri. Maybe they were lured into public by poetry readings at our hole-in-the-wall bookstore, but my parents had no interest in cramming between shelves to see anyone other than T.S. Eliot himself. Authors were my adolescent version of Bigfoot. So when Mrs. Hobbs told our class we’d be meeting with Will Hobbs, her brother-in-law, I jittered. I’d been secretly writing spin-off drafts of his stories in my journal for months.

For an event that left such an impression on my childhood, my meeting with Will is a blurry memory. I know he didn’t dress the way I’d expected. I’d learned from my parents that professionals wore scrubs and lab coats; I think Will wore a fishing shirt and jeans. I was delighted. But what I remember most is that his books were spread out upon a plastic table—so many books—and I could touch them and buy them and understand that these were the creation of a person I knew, had met, had seen. I could be like him, I promised myself.

Yet it took 11 years for me to meet another published fiction author. In that time, my parents realized my aspirations weren’t dissipating with age, and so we reached a professional compromise: I’d go to college to become a writer, and they’d support my writing, so long as I could support myself. I’d become a journalist—secure a full-time job, tell stories that needed telling, maybe snag a byline somewhere respectable—and if, after rent was paid, I still had a hunger for fiction, I’d write books before and after reporting shifts.

Looking back now, all three of us understand this agreement as a stunning caricature of naiveté. But it’s how, with our limited sphere of knowledge, we understood the world of writing: a world of love and awe, tempered by reality.

I was 21 years old and felt ridiculous. I was treating these authors like Hollywood royalty.

That’s why, well into my senior year of journalism school, I still shook when I met Laura McHugh. She was a Missouri-born author, everything I thought I, maybe, could become. In 2017, she arrived in Columbia as one of the featured fiction writers at the Unbound Book Festival, only in its second year at the time. The event was launched in 2016 by Alex George, a now-beloved local author who moved to Columbia from England in 2003 and recognized a need for a literary festival. Columbia is a notoriously festival-loving town; we’re home to the nationally recognized True/False Film Festival, the Roots N Blues N BBQ Festival, and the recently defunct Citizen Jane Film Festival. But our literary community floundered in obscurity. We had writers’ organizations and English professors and journalists and bookstores, but they rarely captured national attention, and more importantly they lacked a thread to weave them together.

The Unbound Book Festival did the job. Over two days in 2016, 27 authors sprawled across the Stephens College campus for panels, readings, Q&As, and signings. George insisted the events be completely free and open to the public. There would be no barriers between fans and authors. They could walk right up to one another. That’s how, in 2017, I ended up in front of McHugh.

McHugh is from rural Missouri, which immediately drew me to her. The author of crime thrillers The Weight of Blood and Arrowood, she’s a master of suspense with a radical empathy for the victims of true crime stories, victims who are so often women and girls. I scribbled pages of notes during an Unbound panel she sat on with other crime writers, and when I stood in line to have my copy of The Weight of Blood signed, my fingers started trembling. I was 21 years old and felt ridiculous. I was treating these authors like Hollywood royalty.

But that’s how it was for me. Having grown up in a vacuum of literary influences, I was finally meeting Missouri-born writers who were now authors, and it felt precarious and delicate and sacred. This was somehow a radical act, like meeting a long-distance pen pal for the first time.

Before this year’s Unbound Book Festival, which took place April 18-20, I called up a few of the 57 visiting authors to see if my reaction—this awe of other authors—had been so unusual. I was generally met with a resounding “no.” Their stories bounced up against and reflected my own.

Christopher Castellani, author of the novel Leading Men, told me ahead of his Unbound trip that he grew up “in a house without any books.” His parents, both immigrants from Italy, had only a third-grade education, but they understood their son’s thrill each time he hauled home a book catalog from school. His first brush with literary greatness came in the form of a poet, a man who visited his sixth-grade English class and scrawled stanzas about heavy metal on the whiteboard. That night, Castellani went home and started writing poems. Today, he’s the author of four novels and a collection of essays, and he serves as the artistic director of GrubStreet in Boston.

When I asked Natalia Sylvester, author of Everyone Knows You Go Home, if she remembers the first published writer she ever encountered, she immediately said, “Oh my gosh, yes. It’s so clear to me.” The writer’s name was Ana Veciana-Suarez, a Cuban American novelist who had just published The Chin Kiss King, “which was doubly fortuitous,” Sylvester explains, “because she happened to be a Latina . . . and up until maybe a year before I hadn’t actually read a Latina’s work in high school.” When Veciana-Suarez showed up at Sylvester’s school, the moment was “game-changing.” It demystified the path for a young Latina writer to become a successful author.

And those role models get a shoulder to lean on; they meet others like them. Even in mid-Missouri, they don’t have to be isolated.

Children’s book writer and illustrator Javaka Steptoe, meanwhile, grew up the son of a published author, also a creator of children’s books. He was a model and muse for his parents’ work. He listened to his father’s stories of breakthroughs or frustrations, storing the advice until the work became his own. Now a Caldecott and Coretta Scott King Illustrator Award winner, Steptoe can trace his influences right back to his home, where his father would emphasize “the importance of how meaningful it is to see yourself” in literature.

It’s not shocking that these anecdotes all take place during childhood, when our dreams solidify into something we can’t shake in adulthood. It’s why the Unbound Book Festival makes a point every year to bring authors to Columbia Public Schools; this April, hundreds of students got to see Jacqueline Woodson, author of the bestselling memoir Brown Girl Dreaming. This tiny festival has reminded us why writing is a vocation worth doing: George tells me multiple stories about the kids, kids “like your fifth-grader,” he says, who are meeting their role models. And those role models get a shoulder to lean on; they meet others like them. Even in mid-Missouri, they don’t have to be isolated.

When I attended Unbound this past weekend, one of the last panels I watched, “The Craft and Graft of Fiction,” featured Castellani. After the authors doled out advice on how to “force your ass into a chair” when you’re afraid to write, an audience member voiced the question I ask myself every few months or so, in moments of panicked anxiety over the state of journalism and publishing: “Do you ever feel like giving it all up and going to work at Target?”

After a few laughs and exchanged barbs from the panel members, Castellani summed up his response with this: “These are the wages of this great life.”

We pay a lot to be writers. We have little to no job security. We sweat self-doubt through our pores. We sit hunched and agonized over drafts that take us decades. And yet, we also get to be in the same room as other writers; to meet the people we so respected as children and have that same influence on the next generation. Even my parents, pragmatic STEM majors they are, understood that.

My writing career is still young, as young as Unbound itself. I have no idea if I’ll ever publish my fiction. I have no idea how it will be received when I do. But already the connections I’ve made within “this great life” have informed my journalism—and my humanity. They have informed the way I think about my hometown and the festival it’s fostered.

Looking back, I think perhaps Mrs. Hobbs knew exactly how lucky she was to have a writer in the family. Why else would she have brought him to her students?

Lauren Puckett is a freelance journalist and the online editor of Vox Magazine. Born and raised in Missouri, she earned her bachelor's and master's degrees in journalism from the University of Missouri and now writes for publications including 5280, The Rumpus, and The Writer.

The View from the Middle of Everything 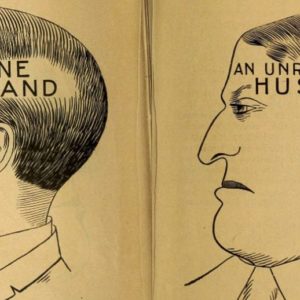 Adolf Meyer never accepted that different approaches to mental illness were in conflict. All “facts,” from whatever source,...
© LitHub
Back to top