There is an affinity between the private letter and prose fiction. In an age when most of our correspondence is replicable and disembodied, a physical letter is an increasing rarity: a tactile message unmediated by a screen, addressed to a particular recipient and often concealed, tantalizingly, inside an envelope. Like the diary, the personal letter is an occasion for first-person narration, and it formed the model for some of the earliest novels in the English language.

Unlike theatre or music, the novel developed as an art to be consumed in private, while curled on a couch, for example, or in bed—and the secrecy associated with letters shares a kinship with a certain kind of reading pleasure. To read an epistolary novel is to be a voyeur. Then again, when we read novels of any kind we are peering into the lives of others. We are continually opening envelopes that don’t appear to be addressed to us.

Whether they feature as a story element or dictate a story’s form, fictional letters can be sites of rumination, reflection, and self-exposure. This might be why, especially in the early examples, letters were often the purview of female characters: they allow for an intense subjectivity counterposed to more external modes of storytelling—such as action and adventure—traditionally dominated by men. Letters suggest absence: readers read letters (mostly) in the absence of the writer. Accordingly, letters might contain honesties that are difficult to express in person, since both reader and writer experience the communication privately, separately. Letters might be spontaneous, or drafted over and over; they might contain declarations of love, reports of death. They might fall into the wrong hands, or go missing in the mail. They might be illegible. They might never be sent. They might, rather, be published; addressed to someone in particular but delivered, instead, to the masses. 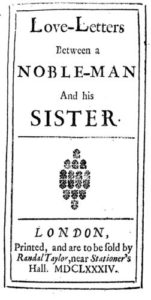 Published anonymously in the late 17th century, this roman à clef has been attributed to the female novelist and dramatist Aphra Behn, and is based on a scandalous love affair between Lord Grey of Werke and his wife’s sister, Lady Henrietta Berkeley. As one of the first examples of the English novel (some claim Robinson Crusoe deserves that title; Virginia Woolf has argued otherwise), Love-Letters shows just how much the fictional letter has begged to be played with right from its very inception. Behn makes use of every kind of narrative trick—faked letters, withheld letters, letters intercepted and read by the wrong people. I like to imagine contemporary readers getting giddy in their private drawing rooms, heads between the pages.

Love-Letters was also a model for Samuel Richardson’s novels of the following century, Pamela (1740) and Clarissa (1740)—needlessly long, hugely popular, and deliberately titillating epistolary narratives whose female protagonists are continually trying to escape the advances of various vile men.

You better not never tell nobody but God. It’d kill your mammy.

I am fourteen years old. I am I have always been a good girl. Maybe you can give me a sign letting me know what is happening to me.

This first line is a command by the protagonist Celie’s abusive stepfather, Alphonso: Celie takes his command literally, although, as we discover by the start of her second letter, her mother has quickly passed away anyway. By recounting her life in these letters addressed to God, Celie rebels against a silence that has been forced upon her by racism and misogyny. Halfway through the book, her sister Nettie leaves for Africa, and Celie stops writing to God and starts writing to Nettie instead, redirecting her self-expression away from the great white male in the sky and towards her literal sister, to whom she describes her discovery and development of her sexuality, her spirituality, and her capacity for self-love. 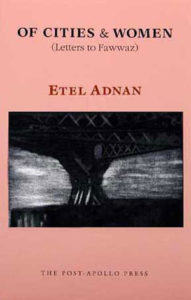 Of Cities and Women is a collection of letters by the Lebanese-born painter Etel Adnan to Fawwaz Traboulsi, composed in lieu of an article she had promised to write, about feminism, for Traboulsi’s magazine Zawaya (“Corners”). I include this as an example of letters by a woman that are not confessional, but on the contrary absolutely outward-facing and observational, while remaining sensitive and personal. We follow Adnan city to city, who, like a Sebald for the Arab woman in diaspora, ruminates on how women conduct themselves differently on the streets of each place, while haunted by the distant spectre of war in Iraq. She writes of Ibn Arabi in Murcia, of Penelope and Ulysses in Amsterdam, of Kleist’s beloved Henriette Vogel in Berlin, of Michelangelo in Rome. . . The book reminds me slightly of Mary Wollstonecraft’s highly digressive Letters Written During a Short Residence in Sweden, Norway, and Denmark (1796) which likewise record “observations, as I travel through new scenes, whilst warmed with the impression they have made on me.” 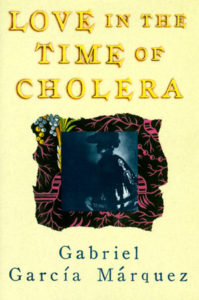 Gabriel Garcia Marquez, Love in the Time of Cholera (1985)

This novel is bursting with letters. In Marquez’s universe—as, arguably, in ours—romantic love is essentially literary, and lovers are readers and often also writers. Florentino Ariza falls in love with Fermina Daza when, while delivering a telegram to her father, he sees her teaching her spinster aunt to read. He woos Fermina with letters. He takes a job writing love letters for other people, channelling his feelings for Fermina Daza and sometimes, farcically, playing both parts on the side of an amorous exchange. Later on, he types his letters on a typewriter, numbers them and keeps carbon copies: Marquez is highlighting Ariza’s awareness that his letters might ultimately have a reading public beyond his beloved. Although Love in the Time of Cholera parodies romantic love and its conventions of courtly address, the novel ultimately constitutes a compelling, totally moving, and vivid portrayal of it. 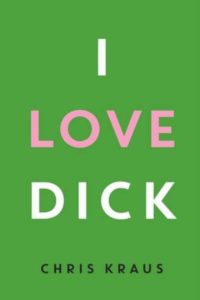 I Love Dick rose to widespread popularity 20 years after its initial publication, when it was republished by Semiotext(e) in 2017. The letters Chris Kraus the narrator writes to the object of her desire, Dick, are, once again, receptacles for female confessional writing. At the same time, Kraus explores the way her apparently self-abasing, “private” narrative can be the source of a specifically female power. She writes: “I think the sheer fact of women talking, being, paradoxical, inexplicable, flip, self-destructive but above all else public is the most revolutionary thing in the world.”

As with Marquez, Kraus’s letters both express and construct desire; and, like Marquez, she plays with the ways in which making private letters public influences their content and meaning. She repeatedly resorts to intellectual art lingo, often with hilarious results: “These letters weren’t meant for you,” she writes to “Dick”; “they were a dialectical resolution of a crisis that never was.” Dick is silent until the very end—because it is only then that he actually receives any of the missives. Kraus flips courtly love conventions on their head: she is the one desiring, not the man. “I think desire isn’t lack,” she writes, “it’s surplus energy—a claustrophobia inside your own skin—”. Just as some of the earliest epistolary novels were spaces for the expression of female interiority, so, through her letters to Dick, Chris Kraus comes to terms with the first person, which she claims until now to have been suspicious of, conceding that: “there’s no fixed point of self but it exists & by writing you can somehow chart that movement.” 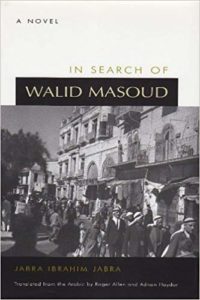 It is not a letter but a tape recording that Walid Masoud leaves behind when he disappears, abandoning his car in the middle of the Iraqi desert. Walid’s friend Jawad al-Husni transcribes Walid’s last monologue into an enigmatic, unpunctuated block of text, which lapses in and out of clarity and contains, at its heart, an explanation of the choice of a tape over a written missive: “the pen would not register all the words that flowed from my brain and lips.” His friends gather to listen and, from there, the novel alternates between different voices each trying to account for Walid’s life and the mysteries of his personality. The picture that emerges is piecemeal and contradictory: Walid Masoud is a freedom fighter, a banker, writer, lover, would-be monk, Oedipal sufferer, his exact views and allegiances seemingly impossible to pin down.

I am reminded of Edward Said’s essay “Arabic Fiction after 1948”: after the expulsion of Palestinians from their homeland, a disaster that threw the trajectory of Arab culture and society towards unity and self-definition radically off-course, Said argues that the literature of the region became focused on the primary unit of the scene—the articulation of present moments, discrete from each other, which amount to a fragmented whole. Narrating the time being is, for the Arab writer, an ontological affirmation in the face of disaster—“a literal existential necessity.” Narration is a bulwark against extinction. The first person fragments, notes, and letters in In Search of Walid Masoud, and indeed the mysterious vocal missive that occasions the entire narrative, are, all of them, desperate strategies of articulation, a ruse to survive—and preserve—in the face of the void.

Isabella Hammad was born in London. She won the 2018 Plimpton Prize for Fiction for her story “Mr. Can’aan.” Her writing has appeared in Conjunctions and The Paris Review. The Parisian is her first novel. 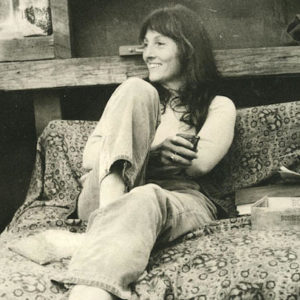 Near the beginning of her 1977 book, Back to Texas, Bobbie Louise Hawkins tells a story from when she was six months old....
© LitHub
Back to top
Loading Comments...