How a pandemic reading project turned Josh Raff into an Austenite • Read an interview with Anne Carson and Robert Currie • Sean Flynn sets out to purchase a peacock • Antonia Pont in praise of sitting • Why do we find creepy children so compelling? • A brief history of the Times wedding pages • How an Irish barman left his mark on the literary world • Anna Dorn on trying to avoid a law career • On being told that your debut novel is plotless • Kate Durbin talks to Chelsea Hodson about the Greek Chorus of objects on Hoarders • John Domini reckons with the Neapolitan Mafia • Sarah Sentilles on the complicated pain of trying to adopt a child • Alison Bechdel on transcendentalism and bliss • Nesrine Malik investigates the roots of “political correctness” • Jennifer Weiner takes the Lit Hub Questionnaire • Andrew McCarthy on landing his career-changing role in Pretty in Pink • Suzanne Simard on the moral reckoning of clear-cutting a forest • The most discussed books on the internet, according to robots • Ashley Nelson Levy wonders how the pandemic might change motherhood literature • Who owns the seaside, anyway? • Marc Hamer on following the Vita Sackville-West school of gardening • On the redemption of Rudy Gobert, COVID Patient Zero of the NBA • Nandana Dev Sen on translating her mother • Martha C. Nussbaum on abuse in the art world • “I thought: Oh, thank God. There are gay women in heaven” • When did mountain climbing become equivalent with business success? • How desire propels the writing life • Joshua Corey on the “macabre waltz” of Hannah Arendt and Martin Heidegger • How the singular “they” saved a translation • Tobias Carroll rereads the work of M. John Harrison

Jane Eyre, Anna Karenina, Charlotte’s Web, and more rapid-fire book recs from Mary Morris • From the archives: The authority of suicide in Sylvia Plath’s The Bell Jar • Dracula, The Time Traveler’s Wife, The Men Who Stare at Goats, and more rapid-fire book recs from Ruth Ware • New titles by Chimamanda Ngozi Adichie, Stacey Abrams, and Edmund de Waal all feature among the Best Reviewed Books of the Week

Kaira Rouda on a new trend in domestic suspense titles • Julia Sirmons with a field guide to the long history of skyjackings • 80+ crime novels, mysteries, thrillers, and nonfiction books to keep you reading all summer long • Otto Penzler on Mary Roberts Rinehart, America’s answer to Agatha Christie • Heather Martin, Lee Child’s biographer, on a new book that reveals insights into Child’s journey • S.A. Lelchuk with 9 great thrillers featuring alter egos • Olivia Rutigliano on the persistent mystery of Arthur Conan Doyle’s name • Iona Whishaw recalls a family history of espionage • Lisa Levy with 5 psychological thrillers you should read this May • Zack Budryk on Mare of Easttown and the prestige crime series 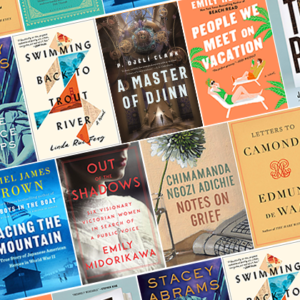