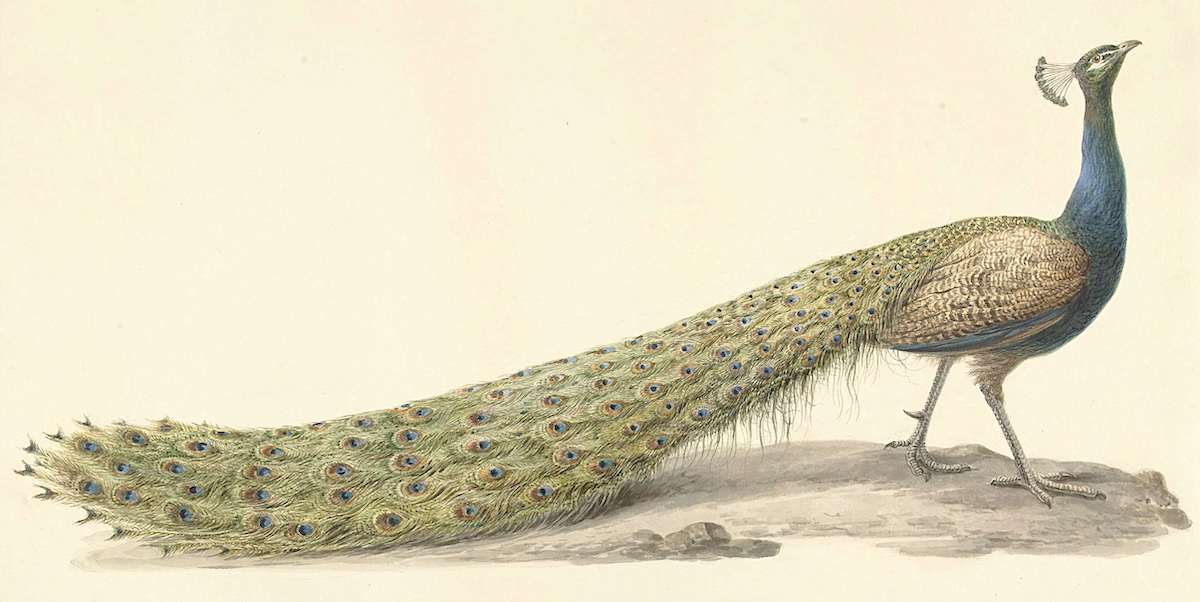 Sean Flynn Sets Out to Purchase Some Peafowl

My wife Louise had spontaneously volunteered to take a peacock from our friend Danielle because a peacock, in a fundamental sense, is not a bird that one possesses so much as experiences; as with an especially moving work of art, the simple act of looking at it will stir emotions. A peacock, she imagined, would patrol the yard like a sentry in dress uniform, high-stepping through the irises and roosting on the low branches of the cedars or the high peak of the barn. Every so often he would throw up a fabulous spray of feathers for no other reason than to remind us that such a spectacle is possible. It would be inevitable and yet somehow a surprise every time.

That is what one peacock would do, but only one.

Louise did not want Flannery O’Connor’s multitudes. She wanted a single peacock, a manageable number proportional to our small phony farm. The property was suitable for a pair of chickens, not a flock, after all, and the paddock was properly sized for a miniature horse, not a Thoroughbred. We were scaled for a solitary peacock, Louise insisted. Three was another matter altogether. A part-time job, she said. A petting zoo.

“You can’t have one peacock,” I told her on the drive home. “He’d be lonely.”

“People have one dog, don’t they? One cat. One snake.”

Her logic was exasperating, but it did not change the fact that our peacocks had already formed a group, a bond. You can’t just break up the band.

“Wait, wait,” I said a little too gleefully. “We don’t have one chicken. One chicken would be cruel. Because they’re so social. Snowball and Comet need each other.”

“True,” she said. “But maybe peacocks aren’t like chickens.”

Twenty-four hours earlier, I hadn’t wanted any peacocks, and for the same reason I’d never wanted koalas or a narwhal: The idea had never occurred to me. Now that it had, now that those fantastical birds had been presented as a reasonable proposition, of course I wanted one. A peacock, it seemed to me, was a flicker of happy imagination, an impossibly magical creature escaped from a dewdrop of unicorns and wood nymphs. The ones on Danielle’s farm were almost transcendent, shining through the dust as if they were refracting light from a star we couldn’t see. I felt a little sad for Danielle. Once she found new homes for all the birds, she would be left with a plain, boring horse farm.

“We can’t have three peacocks.”

From the backseat the boys began cheering for three peacocks. “Let’s get six peacocks!” Emmett shouted. “Let’s get fifty peacocks!”

I leaned toward Louise and whispered, “They’ll get their heads bit off if we don’t take them.” The boys didn’t know this gruesome bit, and I didn’t want to open up a conversation about decapitation just then. But it did seem important to remind Louise that this purchase wasn’t an acquisition, it was a rescue.

“If we get fifty peacocks, you will have one less mom,” Louise said over her shoulder. “But maybe we’ll get a pair.” She patted my hand. “So nobody’s lonely.”

Before we could bring any peacocks home, two issues had to be dealt with immediately, those being food and housing. I assumed peacocks could get by on chicken feed for a few days. But where to put them? The inside of the barn was too cluttered, and the smokehouse was too small. I would need to build something, which I was planning to do for the chickens anyway. But how big did it have to be? Would they need a lot of height, someplace high to roost? Danielle’s hut was only a temporary holding cell. Surely three peacocks would need something more spacious.

Twenty-four hours earlier, I hadn’t wanted any peacocks, and for the same reason I’d never wanted koalas or a narwhal: The idea had never occurred to me.

I turned, as one does in such emergencies, to the Internet. I hesitated over the search term. Are peacocks confined in a pen? An aviary? I settled on the chicken-like “peacock coop,” which is not, according to Google, an obscure search term. There were straightforward questions (How do I build a peacock coop?) and basic tutorials (How to Build a Peacock Coop!) and displays of both the twenty-two and thirty-four best peacock enclosures on Pinterest. I skimmed the blue hyperlinks until, halfway down the first page, glowing like a beacon, was an entry from Martha Stewart’s blog called “Expanding the Peafowl Pen.”

If Martha Stewart had a peafowl pen, it would be the best peafowl pen, which was obvious from her proper use of the word peafowl. To most people, there are only peacocks—boy peacocks and girl peacocks and baby peacocks. As a technical matter, however, there are peacocks, peahens, and peachicks, and they collectively are referred to as peafowl. It’s an unpleasant word, what with that ugly ow sound, and there’s almost never a reason to use it: No one has ever been awed by the beauty of a peafowl. Still, it is the correct word, and anyone dispensing pen-building advice should have a mastery of the nomenclature, even if I never expected to use it in conversation myself. I assumed, for that matter, that pen was the right term, but that it probably could be used interchangeably with coop, especially if one already intended to disregard the peacock/peafowl rule. Also, Martha Stewart in that post referred to her group of peafowl as a muster, which seemed to me much more dignified than calling them an ostentation, as some people do but which is cloyingly descriptive, like calling a group of frogs a hopper or a nest of vipers a squiggly.

That said, the language was all secondary. Martha Stewart’s pen would be the best pen because she is Martha Stewart. I respect the Martha brand. She does not half-ass anything and she is a very good teacher, which I knew because I’d been down this apprenticeship road with her before: By God, Martha taught me how to make a Bûche de Noël. And I’m much better with a hammer than a jelly roll pan.

Martha’s peacock residence resembled a miniature and impeccably kept pale gray barn. It had shiplap walls, a shingled roof, and thirty-foot runs of galvanized pipe and nylon netting extending from each side. A series of forty-two photographs chronicled two craftsmen, Pete and Chhiring, measuring and pounding and bolting and stapling one of the runs—the expansion referenced in the headline—until everything was square and level and sturdy.

I did not have a Pete or a Chhiring in my employ, and I had neither the time nor the money for galvanized pipes and shiplap. I did have long boards, though, a stack of half-rotted two-by-eights salvaged from old garden beds and piled under the shed roof of the barn, and folds of ancient chicken wire that were here when we bought the place. Close enough. If I cleaned out the rest of a pile of useful rubbish, I could build a pen against the side of the barn, under that part of the roof that jutted out like a carport, the same spot I was going to put a coop for Comet and Snowball. It wasn’t level or square, but it was sturdy, with a metal roof and walls on the end and one side. Front to back was sixteen feet and the posts holding up the roof were ten feet apart, a footprint that would give three birds 160 square feet—not cavernous but better than the hut they were in. There was plenty more barn, too; I could always expand. And the ceiling was almost eleven feet—a handful of roosts at various heights would make it feel like a triplex.

Behind a broken lawn mower and eight broken shutters was an old screened door and, behind that, enough scrap lumber to build a frame around it. I screwed the long boards to the posts as a perimeter along the ground, and I used six more as stanchions rising to the rafters. The chicken wire was streaked with rust and creased in awkward diagonals, but I guessed there was enough to cover both exposed sides. My coop wouldn’t be as attractive as Martha’s pen—it would be a cage constructed literally from garbage—but it would be effective in the short term.

Five hours after we’d met, I texted Danielle. working on a coop now. how much for the trio, and is a tomorrow evening pickup good?

Louise had compromised on only two, but I knew she’d come around.

Danielle replied immediately: well, i already sold those 3 . . . but have since caught 2 more! a mating pair male & female. $100 tomorrow & you can have both?

Good for those three, I thought. Safe from the owl. And the price for two seemed like a deal. I’d never shopped for peacocks before, but fifty bucks apiece for mythological apparitions seemed like a steal. I texted back: sold!

The garbage coop was framed by the middle of the next morning, and the first run of chicken wire was stapled in place before noon. Comet and Snowball watched, softly clucking, from a sawhorse that was going to be repurposed as a temporary perch. Every so often, one of them would flutter down and scratch at an insect in the dirt. Farm equipment sheltered there for a hundred years had left an assortment of detritus—loose nuts from old machines, rusted nails, broken bits of clay pots, snipped ends of copper wire—that I’d mostly raked out the night before. In the process, I’d broken up the top half-inch of soil, which I assumed would be better for peacocks to walk on than a gumbo of sharp objects and loose gravel. Exposing a buffet of bugs was a bonus for the chickens.

Danielle texted me just before three o’clock, when I was putting the last screws into the spring hinges for the door. so . . . plans changed again. i have 3 for you to take. would that be ok?? just like the first 3 you looked at. and . . . can you possibly come sooner?

I’d never shopped for peacocks before, but fifty bucks apiece for mythological apparitions seemed like a steal.

She was unloading birds like Black Friday TVs. Clearly, I’d underestimated the demand for peacocks, which wasn’t surprising, considering I hadn’t known forty-eight hours earlier that there was a demand. In any case, we were back to three.

I replied that I’d be there as soon as I could. fabulous!!! text when you are on the way!!

An hour later: birds are bagged & ready to go!

That was a curious word, bagged. I imagined a peacock’s head poking out of a grocery sack, his body restrained in some mysteriously efficient way yet his expression calm and regal, as if he were refusing to concede that he’d been bundled up like produce. They’d probably ride in the backseat, watching out the window like chauffeured royalty.

She wanted a bargain-basement $125 for the three of them. I told her I was leaving, just had to get some cash.

fantastic! they are sitting in the ac in my truck. no hurry.

She stuck a thumbs-up emoji at the end. 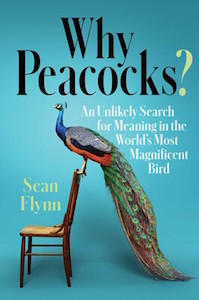 From Why Peacocks? An Unlikely Search for Meaning in the World’s Most Magnificent Bird. Used with the permission of the publisher, Simon & Schuster. Copyright © 2021 by Sean Flynn.

Sean Flynn is a National Magazine Award–winning journalist and author who's reported from six continents during the past thirty years. A long-time correspondent for GQ, his work has been widely anthologized and translated into nearly a dozen languages. He lives in North Carolina with his wife and two boys.

Why Did I Wait So Long to Read Jane Austen? 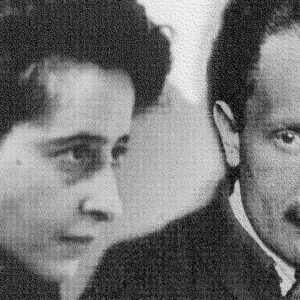 In the fall of 2011, I spent the better part of a month living in Berlin, trying to finish writing a novel while caught up emotionally...
© LitHub
Back to top
Loading Comments...