When an Apparition of Virginia Woolf Interrupts Your Writing Process

Rachel Eisendrath: “She had taken hold of my manuscript. And she was looking down at it.”

I died and then found myself walking across a large, green field. You might think heaven would be overflowing with rare flowers and exotic birds, but this meadow was just plain city grass mixed with dandelions. Some taller weeds grew along the periphery, where the mower hadn’t been able to reach. A few sparrows and pigeons, perhaps slightly fatter and sleeker than those to which I was accustomed, hopped about here and there. Some trees. The meadow might almost have been in Central Park.

Soon, I could see in the distance a small group of people, who were sitting in wicker lawn chairs beneath a cluster of large oaks. A woman was talking, and a few men were listening, leaning back in postures of attentive ease. One of them had his fingers inter­laced behind his head, his legs crossed. Something about the position of their heads indi­cated their intelligence. I found, to my surprise, that I wasn’t at all scared or shy as I approached them; I merely wanted to join their conver­sation. The only desirable kind of heaven, I remembered reading somewhere, is one in which you can contemplate this life. And these people seemed to be actively discussing this life.

Now I was standing before them. The light was playing on the pattern of the woman’s dress, and my eyes could not at first sort out what was light and what was her dress.

She paused in her talk and looked at me.

I thought: —Oh. —Thank God. —There are gay women in heaven. I did not even feel daunted that she was Virginia Woolf. 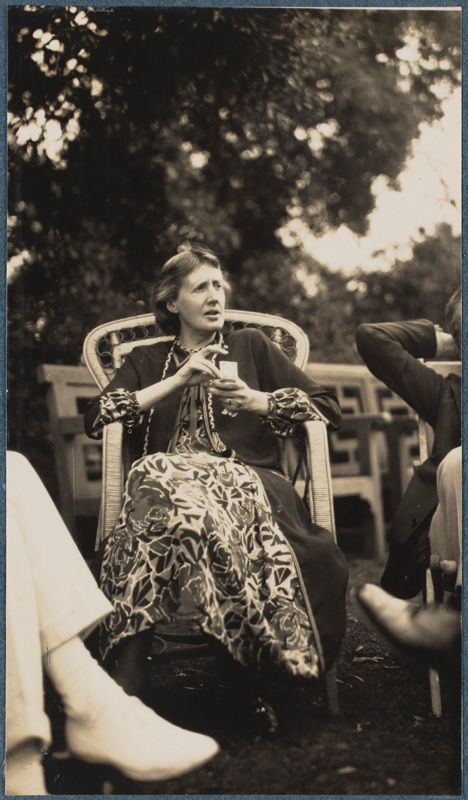 The men, curious who had drawn this glance from their friend, turned then to look at me. But, already, Virginia Woolf’s glance was making me bold. Already, I was growing older, climbing up through the ages of myself so that, as she watched me, I slowly regained the age I actually was, which was close to her age. But it was as if I had drawn those earlier ages up with me and so was now all the ages of myself at the same time. Improbably, without preamble or warning, I found myself telling a rabbinic story about a man who dies and dreams that he finds God. God is sitting at the far end of a room, where He is reading the Torah by candle­light. “What’s wonderful about the story,” I informed Virginia Woolf, “is that God is studying the pages of His own life! Wouldn’t He already know everything that was in that book?”

Virginia Woolf glanced delightedly at her friends and said to me, “But what is in that folder? Have you brought me a gift?”

I realized then that I was carrying my manuscript under my arm and promptly held it out to her.

This was the moment, surely, to introduce my book. Her eyes were focused on me. They—her eyes—were two theatergoers that had settled deeply into their plush seats and were now look­ing expectantly at my face.

But what should I say?

In the tension of that moment, two possible approaches arose in my mind, one academic, the other personal:

1) Academic. It is an analogy so common that it is hard to recog­nize as an analogy: that a work of literature is like a subjectivity. Both operate, largely, in a verbal medium. A book exists in words; I think in words. Moreover, a book is like a subjectivity in that it can—or it can seem to—take in observations about the world, perceive itself, double back on itself, reevaluate itself, be subject to varying interpretations. Collections of lyric poetry in particular often explicitly claim to locate the reader within the mind of the author.

The structure of a book can, therefore, offer a kind of implicit theory of subjectivity. Some of the most famous collections of lyric poems, like Petrarch’s Canzoniere, are written in a form that is fragmented. Petrarch first called the collection Rerum vulgar­ium fragmenta (Fragments of Vernacular Things), and the first poem describes itself as “rime sparse” (scattered rhymes). These articulations might suggest a theory of mind: that there was once something whole that has been disrupted, dispersed—a paradise lost, a childhood lost, an intimacy with God lost, a time before desire struck (separating the world into subjects and wanted objects) also lost.

So what kind of mind is my book? Although this book, like a collection of lyric poems (despite being prose), is written in pieces, in a non­narrative mode, it is not written in fragments, shards, or scattered rhymes.

No unity has been lost because there never was any unity.

That is why this is a book of clouds. Clouds are ephemeral moments of light and color that stay still only as long as you look at them, but then—as soon as your mind wanders—change into something else.

She had taken hold of my manuscript. And she was looking down at it, and opening it, and soon she began to read.

2) Personal. It is said, rightly, that books can save your life. Surely, they can do so in many ways—in as many ways, maybe, as there are readers, as there are hours, as there are apartments, as there are chairs, as there are lamps, as there are cups of coffee, as there are books. In my case, ever since I could remember, I had been inexplicably anxious, given even to a kind of experience of non­being (as though that were possible). There must have been rea­sons for why, from an early age, I was beset with fear and with the sensation that the world, or even I myself, was not entirely solid. It may have been that my father had left us, unsettling my first sense of things; or that my mother then had no one and despaired of her ability to support us; or that perhaps there had once been a certain unspeakable finger that had known me before, as Shakespeare’s Adonis says, I had known myself. Who’s to say? But, surely, even the basic arrangements of existence, the universal rules under which we all live (the inevitability of death, to begin), are so strange that no further reason is needed for anyone to feel perplexed and unsolid—never mind (for now) all the other disas­ters that can wrack a human on her journey from one shore to the other. For me, the solution to this perplexity—or, since no solution is really possible, the orientation toward psychic survival or even toward joy—came in the most unlikely way possible: It was, incredibly, through reading that I was able to find a place for my consciousness. (Incredibly because we have been trained to think that intellectual life and well­being are two separable things.) This place for my consciousness was a kind of Arcadia that was necessarily both a freedom from the pressures of a largely unsparing reality and a reflection on those pressures, a way of inhabiting at the same time both myself (whatever that is) and also another person (whatever that is), a way of drawing in history (whatever that is), a way of thinking in a mode of sufficient com­plexity and suppleness that my mind felt real and also could whir along with a certain lightness, in an as-­if mode that is the single ground rule of fiction. If fiction is anything, claimed Sir Philip Sidney (about whom we will have much to discuss), it must be that fiction is that which is so and not so at the same time. In his words, it is that which “never lieth” because it never claims to tell the truth. In this unlikely way, I became a reader, one who read and read and read (and still reads), and eventually became a pro­fessor of Renaissance poetry (which is what I am now). The clouds in my Arcadia, the one I found and the one I made, hold light and color. They take on the forms of other things: a cat, the sea, my grandmother, the gesture of a teacher I loved, a friend, a girlfriend, a ship at sail, my mother. These clouds stay still only as long as I look at them, and then they change.

But I did not say any of those words to Virginia Woolf.

Instead, just as I opened my mouth to speak, she smiled at me with her eyes. Truly, there should be a separate grammar—a Gram­mar of the Hypothetical—for all the questions and answers that can be exchanged, or might be exchanged, at such a moment when everything seems to pause in the interchange of a significant glance, “when first your eye I eyed,” as Shakespeare says in sonnet 104, where the “eye”s and “I”s bounce back and forth against each other. Suddenly, standing before Virginia Woolf, holding out my manuscript, I found that the present moment included a seemingly infinite number of possible presents, and possible futures, all of which could happen and also, most likely, wouldn’t happen. Each movement of her eyes made my eyes move, which made her eyes move, and so on. The possibilities seemed, for a moment, endless. I was looking into a new world—her eyes—moist globes, suspended in space like planets, but with that slight quiver and charge and receptivity and assertiveness that belong to what’s living . . .

But then the moment had passed. She had taken hold of my manuscript. And she was looking down at it, and opening it, and soon she began to read. 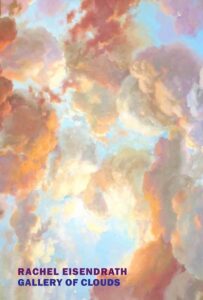 From Gallery of Clouds by Rachel Eisendrath, available via New York Review of Books.

Rachel Eisendrath is a critic and scholar who specializes in English Renaissance poetry. The author of Poetry in a World of Things (winner of the 2019 Elizabeth Dietz Award), she is the Tow Associate Professor of English and director of the Medieval and Renaissance Studies Program at Barnard College in New York City.

Private Practice: Toward a Philosophy of Just Sitting 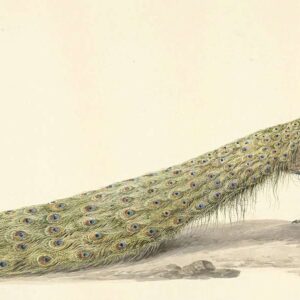 My wife Louise had spontaneously volunteered to take a peacock from our friend Danielle because a peacock, in a fundamental...
© LitHub
Back to top
Loading Comments...