“Are We Going to Take It All?” On the Moral Reckoning of Clear-Cutting a Forest

Suzanne Simard on a Logging Trip

It was 1980 and I was working as summer student for a cut-and-run logging company in the Lillooet Mountains of southern British Columbia. I stared out a window in the office and thought about my plantations. There were many ways to improve—sow more locally adapted seed in the nursery, grow bigger seedlings, prepare the ground more meticulously, plant sooner after logging, remove competing brush. But the clues told me the answer lay in the soil and how the seedlings’ roots connected to it. I sketched a robust seedling with branched roots and running fungi, and a sickly one with a minuscule shoot and stunted roots. But my ideas would have to wait, because today I was assigned to work with Ray in a 200-year-old forest in the glaciated Boulder Creek valley, a couple dozen kilometers from Lillooet.

On this day, I was to play the role of executioner.

Ray and I were there to mark a boundary for clear-cutting. He wasn’t much older than I was, and he lived with the rest of us students in the bunkhouse, but he had experience working in the steep Pacific coastal terrain, and he reminded me of the men in my family. He’d already lost a piece of flesh in the woods, mauled by a grizzly who’d lifted him by the butt with her teeth and was carrying him away before his compass man scared her off with a shotgun.

We headed past the grinding excavators and scraping graders that were building a new haul road and stopped near some old trees on the loamy fans that had accumulated in the crease of the valley. Engelmann spruce, with its broad sweeping crowns and mammoth gray boles. Ray had flashed the map at me—he wasn’t used to sharing information with a girl, and he’d been in a hurry—but the contours I’d glimpsed showed the slopes climbing to towering ridges, the forest increasingly sparse as it met the rocky talus where the marmots perched. Spruce along the creek gave way to Douglas firs where the soil pockets were deep enough to support a sprawling root system. The forest was interrupted every few hundred meters by sweeping avalanche tracks, where devil’s club as thorny as roses and lady fern as lacy as petit point were waist-deep. I remembered these same plants at Mabel Lake. Elation spun in my chest, but it was pinned below the lump in my throat. I picked a sprig of foam flower, its tiny white flowers like ocean spray.

I wanted to scream at the top of my lungs. Instead I rerouted the line and cried inside at my weakness.

With his red wax pencil and compass, Ray marked a perfect box on the aerial photograph where the timber would be clear-cut. He rolled the photo and wrapped an elastic band around it.

“Oops, Ray, missed it,” I said. “Could you show me again?” He reluctantly produced the map, his expression unreadable.

“Are we going to take it all?” I asked. “Couldn’t we leave some of the oldest ones?” I pointed to a monumental tree with lichens drooping like curtains from its branches.

“Are you an environmentalist?” He was a precise technician, aligned with the times and the job. This was his profession, he loved it, and he was getting paid to get it as right as he could. 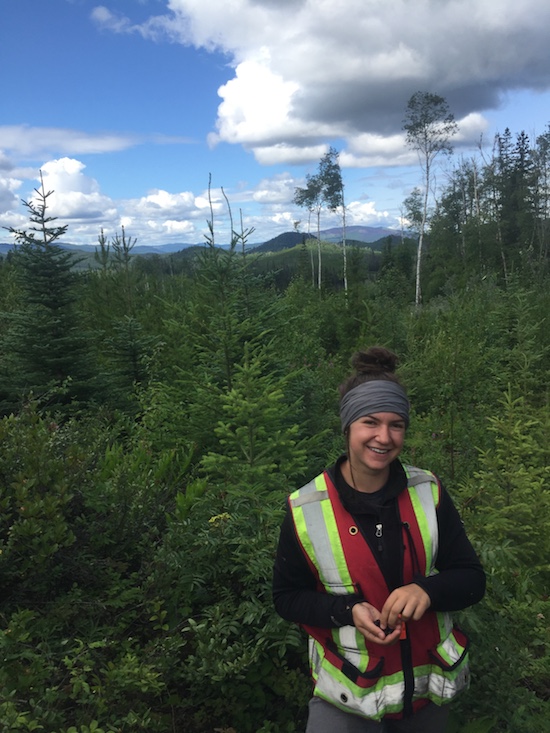 I looked at the dead-forest-standing. I was thrilled to be working in this venerable expanse; I didn’t even mind figuring out how to log some trees. But obliterating whole tracts in one fell swoop would leave little foundation to help the forest recover. The trees grew in clusters, with the eldest and largest—one meter in girth, thirty meters in height—in the deepest part of the hollows where the water collected, with younger trees of various ages and sizes close by. Like chicks clutched around a mother ptarmigan. The grooves of their bark housed tufts of wolf lichen, easy for the deer to nibble in winter. Buffaloberry and soapberry shrubs grew between rocks. Bright-red Indian paintbrushes, purple silky lupines, pale-pink Calypso fairy slippers, and candy-striped coralroot traced the roots fanning out from the tree boles. None of these herbs would thrive after a clear-cut. What the hell was I doing here?

Using Ray’s calculations, we marked out the square with pink ribbons hung every ten meters or so. The fallers would see the pink edge and know where to stop clear-cutting. The ancient ones outside the boundary would be spared.

Ray told me to run the line straight at 260 degrees, almost due east, basically following the edge of the avalanche track. He was gazing up the boundary as I pulled the chain, a slippery nylon rope, fifty meters of wrapped twine, from the back pocket of my vest. He would follow, filling in with more flagging for the fallers.

I adjusted the dial of my compass and spotted a tree to use as a beacon. The chain unraveled like a skipping rope, every one of its fifty metal clasps marking one-meter increments. I moved like a coyote, threading the chain over logs, through thickets of brush and between families of trees.

“Chain!” Ray shouted when I reached the end of the fifty-meter stretch. When he tugged on his end of the rope, I hung a ribbon to mark the spot.

“Mark!” I shouted back, my voice rising over the sound of water rushing below. I loved shouting, “Mark.”

Satisfied with the accuracy of our first chain length, Ray climbed toward where I was hanging pink ribbon from branches. A squirrel jabbered from his perch, and I dug my fingers into where he’d excavated and I felt a soft pebble. Under the forest floor was nestled a piece of fungus like a chocolate truffle that I pried out with my knife, cutting a black strand that plunged deeper into the soil. I stuffed the truffle into my pocket.

“You see those big pumpkins?” Ray asked, referring to some large firs outside the line of our square. He thought we should take them. The bosses would be pleased—an extra bonus of prize trees.

I pointed out that they were well away from the cutting-permit borders. Including them would be illegal. Not only were big elder trees an important seed source for the open ground, they were favorite perches for birds, and I’d seen bear dens under the necks of the roots. Neither of us had the authority for decisions like this. I knew he loved the trees too; that was the fundamental reason we both picked this profession. “Can’t leave perfectly good firs for no reason,” he said, mulling it over. “They can be run through the veneer mill.” 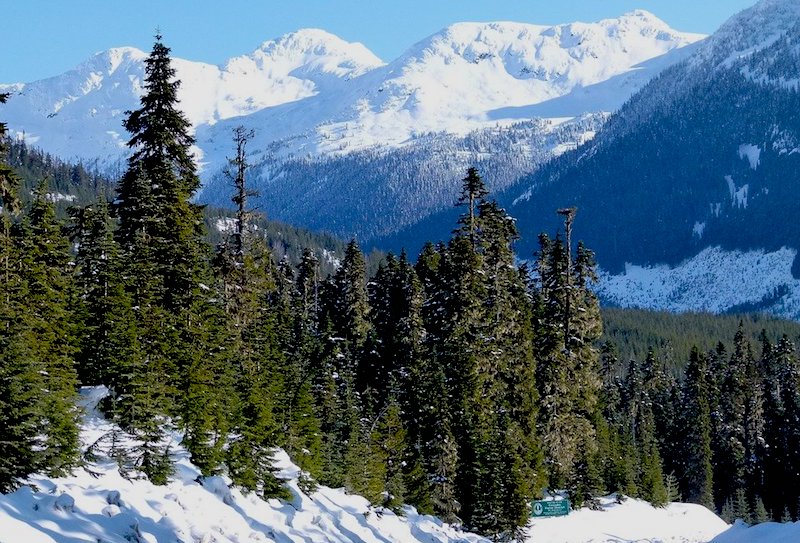 We walked to one of those forbidden elders, and I wanted to shout at it to run. I understood the pride of claiming what was grandest, the temptation—green-gold fever. The handsomest trees captured top prices. They meant jobs for the locals, mills staying open. I checked out this one’s immense bole, seeing the cut through Ray’s eyes. Once you start hunting, it’s easy to get addicted. Like always wanting to snag the tallest peaks. After a while, your appetite can never be sated.

“How?” Ray’s arms were crossed, his face puzzled. The government couldn’t check every inch of our block boundary. Besides, these ones were so close, so easy.

“They’re habitats for owls.” I had heard at school about the rare dry-forest ones—flammulated owls—but didn’t know much about them. I didn’t have a clue if they were at Boulder Creek. I was grasping at straws.

“Do you want this job next summer? I sure do.” The company would give us credit for finding more wood. He glanced backward, as if the tree might pick up and escape.

I wanted to scream at the top of my lungs. Instead I rerouted the line and cried inside at my weakness. At the timberline where a magnificent fir stood, my shoulders tightened. A curtain of cow parsnip and willows obscured the avalanche track, but the air was still. I quickly hung the pink ribbon so the tree fell inside the boundary. In a week, it would be lifeless. Delimbed, bucked, and piled along a road right-of-way, waiting to be loaded onto a truck.

Ray and I rerouted all the borderlines. We condemned another ancient.

And another. And another. By the time we were done, we’d stolen at least a dozen elders from the edges of the avalanche tracks. When we took our break, he offered me chocolate chip cookies and said he had made them himself. I declined and wrapped the nylon chain into a figure eight, using my boot and knee as anchors. I floated the suggestion that we could convince the company to leave some firs in the middle of the block to spread their seed. I blurted, “You know, the way they sometimes leave the big seed trees in Germany.” “We only clear-cut around here.”

My heart withered. What had happened to that little girl who ate dirt? Who’d made braids of roots, entranced by complex natural wonders?

When I tried to explain that where I’d grown up, we’d log small patches, and the dragged logs churned the floor to make a bed for fir seeds to germinate, Ray countered that if we left some lone firs, the wind would blow them over, and the bark beetles would move in. “And the company will lose a pile of money,” he added, frustrated that I just didn’t get it.

It would be a gut punch to see the stately firs reduced to stumps, the elegant shape of the stand carved into an empty square. Back at the office, I glumly prescribed cluster plantings for the clear-cut, with Douglas fir in the hollows, ponderosa pines on the outcrops, and prickly needled spruce along the creek, mimicking the natural patterns. Ray was right, of course, that the company would reject my idea of retaining a few elders for seeding the disturbed ground, but this planting design would at least maintain the natural species richness of the site.

Ted told me we would just plant pine.

“But there’s no lodgepole pine up there,” I said. “Doesn’t matter. It’ll grow faster, and it’s cheaper.”

The other summer students near the map table shifted. Foresters in the surrounding offices put their hands over their phone receivers, alert to whether I would have the guts to start an argument. A calendar fell off the wall, struck the floor.

I went to my desk and rewrote the planting prescription, and my heart withered. What had happened to that little girl who ate dirt? Who’d made braids of roots, entranced by complex natural wonders? Places of terrible beauty and layered earth and buried secrets. My childhood was shouting at me: The forest is an integrated whole. 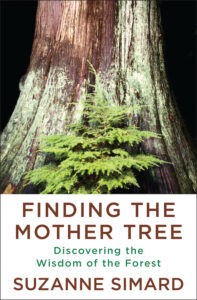 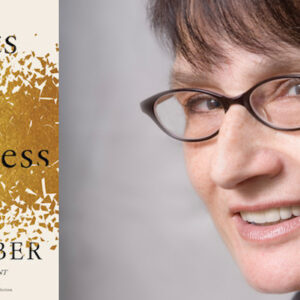 When I wrote about Joan Silber’s Improvement for my BBC Culture piece on the best books of 2017, I noted her much celebrated...
© LitHub
Back to top
Loading Comments...