Yiyun Li on the best (and worst) writing advice she’s received • Read from Annie Ernaux’s lovelorn 1988 diary • Annie Proulx on the destruction of the English Fenlands • Indian writers reflect on 75 years of independence and partition • Who should win the 2022 Nobel Prize for Literature? • How an architect’s endless pursuit of artistic perfection drove him to despair • Qian Julie Wang on writing her memoir on the subway • When male authors write male violence • Julia Reed on the memories woven into clothes • Stacey D’Erasmo on writing about a complicit woman • Read Ted Berrigan’s original (hilarious) review of Frank O’Hara’s Lunch Poems • What Don Quixote reveals about an empire at its peak • On the “agile, energetic” prose of Isaac Babel • Why so many of us experience arachnophobia • A Wikipedia entry of Adrienne Raphel’s dark academia • How the law of Jim Crow still hovers over the 21st century • Tracing the legal history of the right to bear arms • The found poems of Goliarda Sapienza • Nadiya Hussain’s very simple coffee cake • The power of a writing uniform • What our robot future looks like • How “Aunt Elsie,” a beloved newswoman and children’s columnist, soared to fame • Maori Murota’s recipe for Okonomiyaki, easy Japanese pancakes • On Janet Yellen’s mission to use the Federal Reserve’s powers to actually help those in need • How can we make amends to someone who can’t receive our apology? • How to love your horrible little goblins, and other advice from Calvin Kasulke 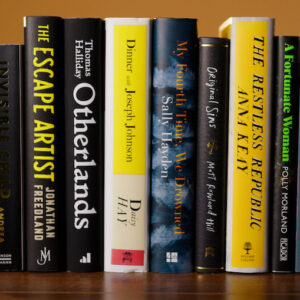 This year's longlist for the Baillie Gifford Prize encompasses a diverse selection of some of the best nonfiction published...
© LitHub
Back to top